It is a concept car designed by Christopher Weil. It is the first production rendition for BMW's Progressive Activity Sedan (PAS) series of cars and based on the F07 platform The 5 GT serves as a combination of a sport sedan, an SUV, and a Gran Turismo. The concept was equipped with individual rear seats separated by the center console, whereas the production model has 5 seats. Although there is an optional extra which includes "executive class seating" eliminating the 5th seat Some special models delivered with M-Sport and Alpina tuned specs.

The design is similar in length to the 7 Series, has a height and trunk space that is slightly larger than the 5 Series (E61) wagon, and headroom comparable to the BMW X5. The vehicle has a coupe-like roofline, elevated seating, and a unique "bi-modal" trunk which operates like a sedan or a traditional SUV. For the first time on a 4-door BMW, the 5 Series GT features frameless doors. The headlights contain the new LED Corona rings slanted at an angle and extending into the fenders. The concept is showcased with 21-inch wheels and a new liquid metal styled paintwork called Fluid Cuprite, made specifically for the concept.

The vehicle was unveiled at the 2009 Geneva Motor Show.

The BMW 5 Series Gran Turismo launched as a 2010 model during the fourth quarter of 2009, with a price ranging from $57,500 to $99,170 in United States. during the fourth quarter of 2009. The 5 Series GT was sold alongside the E60 BMW 5 Series sedan and wagon (which was in its last production year) for the 2010 model year, and then continued to be sold with the all-new F10 BMW 5 Series sedan. BMW stopped exporting the 5 Series wagon to the United States after 2010 due to its unpopularity there, so the GT is considered a replacement.

550i xDrive Gran Turismo was unveiled in Auto China Beijing 2010.

Originally the 530d xDrive had been built, but the Trussardi cars could be ordered for 535d, 535i and 550i models.

The F07 platform of the 5 Series GT provides a vehicle length traditionally found in a BMW 7 Series, but with the headroom found in the BMW X5 crossover SUV. The F07 also features a unique "bi-modal" trunk, similar to the Twin Door concept on the Škoda Superb, which may be opened in a traditional car-like fashion, or the entire hatch may be open in a traditional SUV fashion for larger objects. Autoblog has suggested that similar vehicles include the Mercedes-Benz R-Class and the Lincoln MKT. Edmunds Insideline has suggested that BMW has designed the 5 Series GT as "sedan-style utility" while the BMW X6 fastback crossover SUV (released the year before, in 2008 as a 2009 model) was meant as a "coupe-style utility".

On January 30, 2009, BMW released a video "BMW Concept: Scribble Video". The video was the first public introduction into the thought process behind the design of the progressive activity vehicle series and the upcoming 5 GT.

The BMW 5 Series GT is roughly US$3,000 more than the equivalent BMW 5 Series sedan, being priced comparably to a similarly equipped BMW X5 midsize crossover SUV, and significantly less expensive than the BMW 7 Series. The 5 Series Gran Turismo, despite being badged as part of the midsize 5 Series lineup, has been described by Edmunds Insideline as a "7 Series Hatchback in Reality". This is as the GT's 120.7-inch (3,070 mm) wheelbase, 63.4-inch (1,610 mm) front track and 65.1-inch (1,650 mm) rear track are shared with the full-size short wheelbase 7 Series (F01), giving the GT considerably larger dimensions than the 5 Series (F10). Indeed, the F07 5 Series GT shares design cues with that of the F01 7 Series; notably the shape of the headlights flanking a larger split-kidney grille, as well as its rear "L"-shaped taillights with a chrome reflector strip. The 2010 BMW 550i GT weighs in at 4,938 pounds (2,240 kg), which is 400 pounds (180 kg) heavier than the 2009 BMW 750i, and consequently the 550i GT's driving dynamics suffer compared to the 2009 BMW 750i and 2009 BMW X6 xDrive50i, despite sharing the same 4.4 L biturbo V8 engine.

The F07 Gran Turismo shares the same F01 7 Series-derived platform, powertrain, mechanical package, and dashboard with the upcoming F10 5 Series. However, their front fascia has different headlights and bumper air intakes, while their taillights also differ. The F07 also has a taller height, resulting in a higher center of gravity, its longer length allows for more rear legroom, the rear passenger accommodation has optional "Executive" bucket seats for two instead of the three-seat bench, and it weighs 400 pounds (180 kg) heavier compared to the F10. The F07 also features frame-less doors and a double-pane liftgate trunk.

Year 2009 to current F07 (535 GT) using N55B30 The 2,979cc six-cylinder powerplant features for the first time High Precision Injection and variable Valvetronic valve management combined with the single twin-scroll turbocharger. Instead of using two small turbochargers like other models in BMW, it uses one large hidden turbocharger with a dual scroll system that eliminates turbo lag which disposes requirement of paddle shift. Its 300 bhp N55 engine's performance is untouchable by other BMW cars except M-Series units.

In the 5 Series GT, there are several optional driver assistance systems: 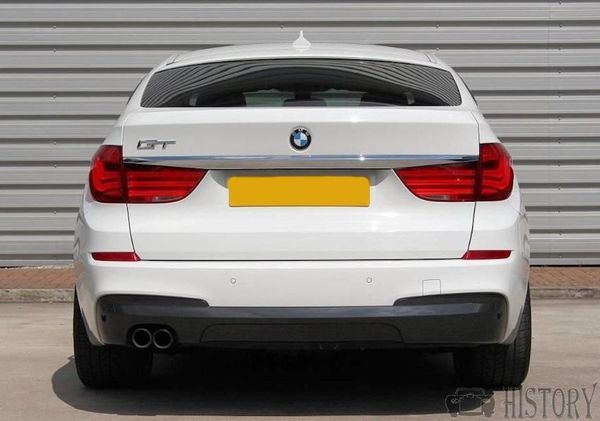