The Bentley State Limousine is an official state car created by Bentley for Queen Elizabeth II on the occasion of her Golden Jubilee in 2002.

The State Limousine is 83.0 cm (2.723 ft) longer than a standard Bentley Arnage, 25.5 cm (10.0 in) taller, and 6.8 cm (2.7 in) wider. It is equipped with broad coach doors that open to the rear almost 90 degrees. Opaque panels over the backlight of the car can be installed for either added privacy or removed for added visibility of its passengers.For protection of its occupants, the bodywork and glass are armoured, the cabin can be sealed air-tight in case of gas attack and is also blast-resistant, and the tyres are kevlar-reinforced. 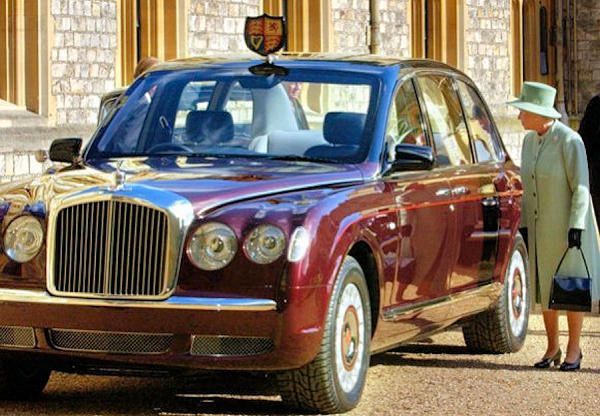 Only two of these vehicles were built, making it even rarer than the Rolls-Royce Phantom IV, of which just 18 were built for royalty and heads of state.

The Bentley is used only on official engagements, and is always escorted by a selection of marked and unmarked Royal Protection Squad vehicles and local police vehicles and motorcycle outriders. The Queen also uses it to travel to church when at Balmoral and Sandringham House. When abroad, the Queen may use other state cars or something provided by her hosts.

Like all British state cars, the Bentley has a mount on its roof for an illuminated crest and a pennant, which can be inserted from inside the vehicle. These both usually feature the Royal Standard, although other symbols can be used for occasions such as a state visit. When the Queen is on board, the Bentley "Flying B" hood ornament is either replaced by Her Majesty's personal mascot of Saint George slaying the dragon or a single standing Lion. The limousines are equipped with flashing lights, two behind the grill and two on the front bumper, that are occasionally put to use. The State Limousines do not have number plates. The Bentley is claret and black like all the British state limousines.

In January 2009, it was announced that both Bentley State Limousines will be converted to run on biofuel.