The Bentley 4½ Litre was a British luxury four seater sports car built from the late 1920s.

Successor to the original 3-litre Bentley was the 4½ Litre, which made its first appearance at Le Mans in 1927, and won the race in 1928. Replacing the Bentley 3 Litre based on a chassis built by Bentley Motors, it is famous for prewar British motor racing and for its popular slogan "there's no replacement for displacement", created by the founder of Bentley, Walter Owen Bentley. Bentley sought to produce a more powerful race car by increasing engine displacement sold as a Chassis and body work built by coachbuilders such as Vanden plas .

In 1927 the Bentley 3-litre was developed into a 4½ Litre variant still with four cylinders and development pushed its output up ultimately from 100 bhp to 130bhp. The standard model had a 10 ft. 10 in. wheelbase and with a 3.53:1 back-axel ratio, a power output of 110 b.h.p. at 3500 rpm.This gave the basic model a top speed of of 92 m.p.h.The model was altered surprisingly little during its period in production,one of the modifications being the substitution in 1928, of the heavy and cumbersome plate clutch for the previous cone clutch item.

The four racing cars fitted to subsequent unsupercharged litre engines. Power output was 175 b.h.p., and the maximum speed 103m.p.h. A 4 1/2-litre car won at Le Mans in 1928.In 1930 a main production Roots-blown edition was available which now had a clear 100 m.p.h. maximum speed ,coupled with remarkable smoothness and flexibility and a quite uncontrollable thirst for petrol. A radiator badge with different colours used for the different model types the 4½ as Black While other models as blue red and green.

Although the Bentley 4½ Litre was heavy, weighing 1,625 kg (3,580 lb), and spacious, with a length of 4,380 mm (172 in) and a wheelbase of 3,302 mm (130.0 in), it remained well-balanced and steered nimbly. The manual transmission, however, required skill, as its four gears were unsynchronised.The robustness of the 4½ Litre's latticed chassis, made of steel and reinforced with ties,was needed to support the heavy cast iron inline-four engine.The engine displacement was 4,398 cc (268.4 cu in): 100 mm (3.9 in) bore and 140 mm (5.5 in) stroke. Two double carburetters and dual ignition with Bosch magnetos were fitted. The engine produced 110 hp (82 kW) for the touring model and 130 hp (97 kW) for the racing model. The engine speed was limited to 4,000 rpm A single overhead camshaft actuated four valves per cylinder, inclined at 30 degrees. This was a technically advanced design at a time where most cars used only two valves per cylinder. The camshaft was driven by bevel gears on a vertical shaft at the front of the engine, as on the 3 Litre engine.

The luxurious Bentley cars attracted attention. But after two years without success, Bentley convened a group of wealthy British men, "united by their love of insouciance, elegant tailoring, and a need for speed," to renew Bentley's success.Both drivers and mechanics, these men, later nicknamed the "Bentley Boys", drove Bentley automobiles to victory in several races between 1927 and 1931, including four consecutive wins at the 24 Hours of Le Mans, and forged the brands reputation.

It was within this context that, in 1927, Bentley developed the Bentley 4½ Litre. Two cylinders were removed from the 6½ Litre model, reducing the displacement to 4.4 litres. At the time, the 3 Litre and the 6½ Litre were already available, but the 3 Litre and 6½ Litre's was under-powered performance models  .

For many people the 'Blower Bentley'—the supercharged 4 1/2 litre car is the ultimate sports car from the time. Developed by Sir Henry Birkin, one of the 'Bentley Boys', the car was used in some of the top competition events of the period, including Le Mans. At the French Grand Prix in 1930 Bentley came in second.Birkin, aided by a former Bentley mechanic, decided to produce a series of five supercharged models for the competition at the 24 Hours de Le Mans Mercedes-Benz had been using superchargers for years.Thus the 4½ litre Blower Bentley was born.

The first supercharged Bentley had been a 3 litre FR5189 which had been supercharged at the Cricklewood factory in the winter of 1926/7. The Bentley Blower No.1 was officially presented in 1929 at the British International Motor Show at Olympia, London. The 55 copies were built to comply with 24 Hours de Le Mans regulations The car was put into limited production in a more cooler type form by Bentley. Fifty machines were made. The Roots-supercharged engine now had a stronger crankshaft.

The essential difference between the Bentley 4½ Litre and the Blower was the addition of a Roots-type supercharger to the Blower engine by engineer Amherst Villiers, who had also produced the supercharger. W. O. Bentley, as chief engineer of the company he had founded, refused to allow the engine to be modified to incorporate the supercharger. As a result, the supercharger was placed at the end of the crankshaft, in front of the radiator. This gave the Blower Bentley an easily recognisable appearance and also increased the car's understeer due to the additional weight at the front. A guard protected the two carburettors located at the compressor intake. Similar protection was used, both in the 4½ Litre and the Blower, for the fuel tank at the rear, because a flying stone punctured the 3 Litre of Frank Clement and John Duff during the first 24 Hours of Le Mans, which contributed to their defeat.

Between 1927 and 1931 the Bentley 4½ Litre competed in several competitions, primarily the 24 Hours of Le Mans. The first was the Old Mother Gun at the 1927 24 Hours of Le Mans, driven as a prototype before production. Favoured to win, it instead crashed and did not finish. Its performance was sufficient for Bentley to decide to start production and deliver the first models the same year. The 'blower' cars were later raced under the sponsorship of the Hon. Dorothy Paget.

In 1928 Barnato and Rubin drove a 'four-and-a-half to victory at Le Mans to underline Bentley's grip on this trial of endurance and speed. Meanwhile Sir Henry 'Tim' Birkin decided that to achieve optimum performance from W .0.'s design, supercharging should be adopted. The original designer never approved of supercharging as a method of obtaining increased power, always following the dictum that 'there is no substitute for cubic inches'— when he required more urge, he preferred to enlarge the engine capacity. The Hon. Dorothy Paget financed Birkin's plan for a supercharged 4.5-litre Bentley and the cars were modified in her premises at the resultant 'Blower Bentley The crankshaft, pistons and lubrication system were special to the Blower engine. It produced 175 hp (130 kW) at 3,500 rpm for the touring model and 240 hp (180 kW) at 2,400 rpm for the racing version, which was more power than the Bentley 6½ Litre developed. A total of 54 'Blower' Bentleys were built, the vast majority for sale as road cars.

A total of 720 4½ Litre were produced between 1927 and 1931, including 55 models with a supercharged engine known as the Blower Bentley. A 4½ Litre Bentley won the 24 Hours of Le Mans in 1928. Though the 4½ Litre Bentley's competitive performance was not outstanding, it set several speed records, most famously in 1932 at Brooklands with a recorded speed of 222.03 km/h (138 mph).

Far from being the most powerful in the competitions, the 4½ Litre of Woolf Barnato and Bernard Rubin, raced neck and neck against Charles Weymann's Stutz Blackhawk DV16, setting a new record average speed of 111.12 km/h (69 mph); Tim Birkin and Jean Chassagne finished fifth. The next year, three 4½ Litres finished second, third, and fourth behind another Bentley, the Speed Six, which possessed two more cylinders.

The naturally aspirated 4½ Litre was noted for its good reliability. The supercharged models were not; the two Blower models entered in the 1930 24 Hours of Le Mans by Dorothy Paget, one of which was co-driven by Tim Birkin, did not complete the race. In 1930, Birkin finished second in the French Grand Prix at the Circuit de Pau behind a Bugatti Type 35. Ettore Bugatti, annoyed by the performance of Bentley, called the 4½ Litre the "fastest truck in the world." The Type 35 is much lighter and consumes much less petrol. Blower Bentleys consumes 4 litres per minute at full speed 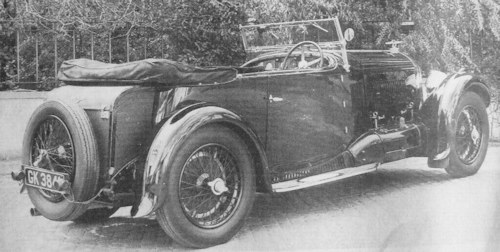 Bentley 4.5 Litre in Film And TV

Steed also amongst other things drives a Bentley 4.5 Litre in the 1960s Avengers TV Series. 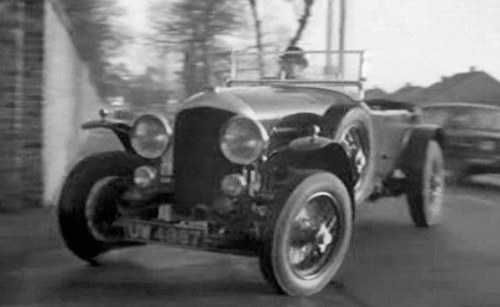 Ian Fleming's character James Bond drives a 1930 Blower Bentley in three of the 007 Novels, Casino Royale, Live and Let Die and Moonraker. In the books, Bond drives one of the last Blower Bentleys built, a battleship grey Convertible Coupé.