APAL was a small Belgian car factory that started in the 1960s there main production was kit cars built on the VW Beetle chassis.

Fiberglass specialist Edmond Pery founded the automobile manufactory in Blegny -Trembleur (Liège) in 1961. Pery presented his first model, a GT coupe with gullwing doors, powered by Volkswagen or Porsche engines, at the 1962 Brussels Motor Show .By 1965 Apa began with the production of a Formula V - single-seater .Between 1968 and 1973, about 5000 fiberglass bodies were produced for different buggies, such as the Apal Buggy, the Apal Rancho, the Apal Jet, the Apal Auki the Apal Corsa (with gullwing doors) and the Apal Horizon.

The most successful model was the Apal Speedster, a replica of the Porsche 356 , based on a shortened VW Beetle chassis. 700 Speedsters were built from 1981 to 1994. In 1984 Apal also developed a pre built two-seater sports coupé using Mercedes-Benz W201 underpinnings, called the Francorchamps This was developed together with an American company only two copies were built.

The last model, the Apal Sport One, was based on the Pontiac Fiero and was introduced in 1992.Edmond Pery also designed a four-wheel prototype for DAF in 1974 and another prototype for Volkswagen in 1992.In the meantime, the company has changed production and produces luxury bathrooms. The brand "Apal" had been taken over by a German company. 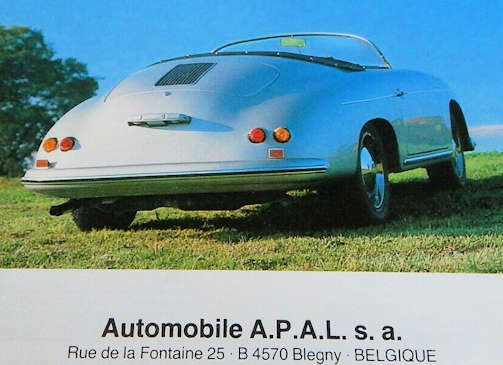