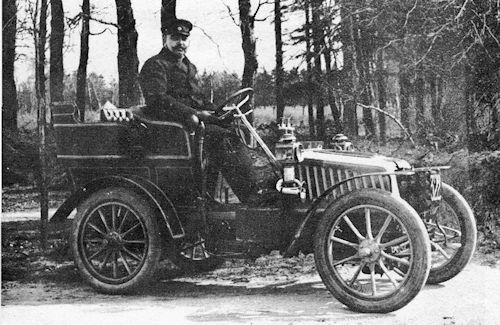 The Société Victor Antoine Fils et Compagnie was a Belgian manufacturer of automobiles from Tilff near Liège . The brand name was Antoine .

The company first exhibited vehicles at an exhibition in Brussels in March 1900 . The production of cars ended in 1902. In addition, engines were created, which were called Kelecom after the engineer who developed them. These Kelecom engines were sold until 1905 to other vehicle manufacturers such as Anglo-Dane , Kensington Automobile Company , Knowles Automobile Manufacturing Company and L'Automobile .

The vehicles were a tricycle and a four-wheeled car, both with an air-cooled 2.5- horsepower engine, and a two-seat voiturette with a water-cooled 4-horsepower engine.This firm were mainly makers of engines, but a few voiturettes were built.

At least three models were offered. One was a 4 hp (3.0 kW) voiturette. a 9hp The other, offered in 1903, was a 15/25 hp car.These early cars used a single-cylinder Kelecom engine mounted at the front and a 2-speed gearbox.
They were sold in the Netherlands under the name La Toroille.
Belgium