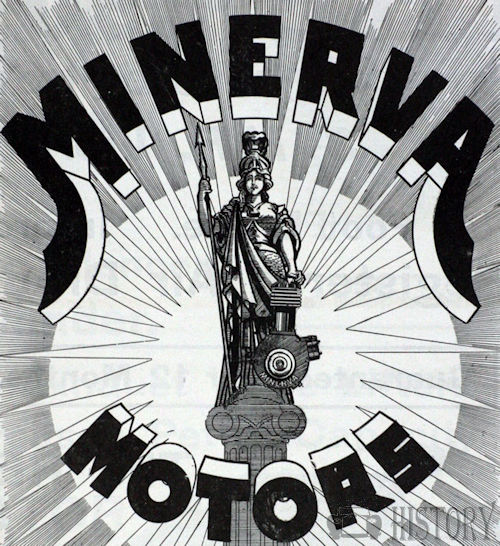 The Minerva was a prominent Belgian luxury automobile manufactured from 1902 until 1938. The company became defunct in 1956.

Minerva was a Belgian manufacturer of luxury cars between 1902 and 1938.

The Belgian Sylvain de Jong (1868-1928) founded in 1897 the bicycle factory Minerva in Antwerp . In 1900 he began a 3 or 4 horsepower Swiss single-cylinder engine of the brand Zedel to mount his bicycle. After acquiring a license from the Swiss engineers H. Lüthi and E. Zürcher (they had developed a 211 cc engine), he began building motorcycles . Their engines were arranged obliquely under the tube frame together with the tank and the ignition . His carburetorworked through a touchpad. The motorcycle was powered by a twisted, round leather belt . The leather strap transferred the movement of the motor pulley to another larger diameter pulley attached to the rear spokes of the bicycle. This compound was known as the Minerva position. The Minerva motorcycles quickly gained a good reputation due to their reliability and their victories at the Zurenborg racetrack. Thanks to strong demand, the business grew quickly and was relocated to new buildings.

Minerva also made bicycles over time. Road bikes were built from tubing sets by the Italian pipe maker Columbus Tubi . Today wheels are distributed by Minerva again. These are aluminum trekking and city bikes.

After trials with light automobiles, a few years were produced small vehicles with single-cylinder engines, which were named Minervette. In 1902, a 6 CV four-cylinder model was added. In 1903 de Jong founded NV Minerva Motors in Berchem near Antwerp . In 1904 he began producing models with two- , three- and four-cylinder engines with chain drive and metal-clad wood frame. In 1907, Minerva racing cars took the first four places at the Ardennes race. As the 8-liter car 1908 at the Belgian Ardennenrennen the Kaiserpreis de Jong finally devoted himself to the construction of luxury, large-volume cars and stopped the production of bicycles and motorcycles.

Charles Rolls , who later co-founded Rolls-Royce , began selling the 14 CV 2.9 liter Minerva in England , which became a major market outside the Netherlands , France and Switzerland. At £ 105, the minervette was the cheapest car in the UK market at 636 cc.

In 1908 Minerva acquired a worldwide license for the double slide motor of the American Charles Yale Knight . These engines ran extremely quiet and quiet. Besides Minerva, the British Daimler and the French Panhard & Levassor engines also built this construction. All future Minervas stayed with this unit, and valve engines disappeared from the program, which should prove fateful for Minerva. At the Austrian Alpine competitions and the SwedishWinter competitions quickly set with the new engine sporting success. Soon, apart from the 6.5-liter engine, one with 2.5 and one with 4.5 liters capacity was part of the Minerva range. Among the most famous customers of the prestigious brand were the kings of Belgium, Sweden and Norway and Henry Ford .

When most cars still had a crank start , Minerva built on request electric starters and lighting. In addition to the primitive leaf springs , Minervas already had shock absorbers and spiral-toothed rear-axle angle gearboxes.

In 1902 De Jong added cars to his production as well with a 6 hp four-cylinder model. In 1903 he founded Société Anonyme Minerva Motors in Berchem (Antwerp). Volume car production began in 1904 with a range of two-, three- and four-cylinder models with chain drive and metal clad wooden chassis and the Minervette cyclecar. The 8-litre Kaiserpreis won the Belgian Circuit des Ardennes race in 1907. 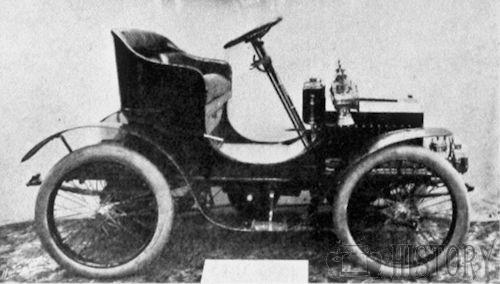 Charles S Rolls (of future Rolls-Royce fame) was a Minerva dealer in England selling the 2.9-litre 14 hp (10 kW). The most important market for the manufacturer remained England, where at £105 the small 636 cc single-cylinder Minervette was the cheapest car on the market, followed by the Netherlands and France. 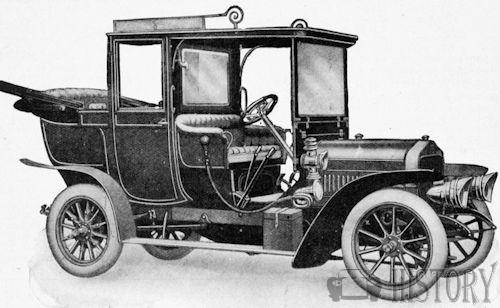 In 1908, Minerva obtained a worldwide Knight Engine license. The Knight motor, developed by Charles Yale Knight in the United States, used double sleeve valves and ran almost silently. All future Minervas would use these engines. Sporting successes continued with the new engines including the Austrian Alpine Trials and Swedish Winter Trials. Customers for the Minerva would include kings of Belgium, Sweden and Norway, Henry Ford and the Impressionist Artist Anna Boch. 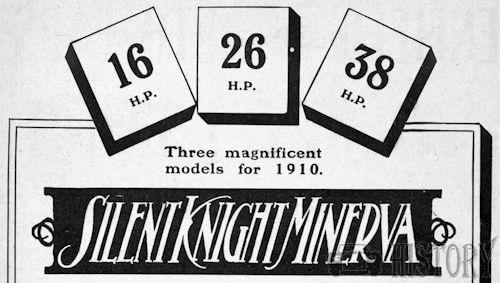 During World War I Sylvain de Jong and his engineers were based in Amsterdam where they maintained development of their automobiles. Minerva cars were used for hit and run attacks against the Germans initially with rifle fire and light machine guns from simply protected open topped vehicles. These vehicles became increasingly sophisticated until trench warfare robbed them of the mobility needed for their hit and run tactics.

In 1920, they returned to Belgium to restart the production of luxury cars with the 20CV 3.6-litre four-cylinder and 30CV 5.3-litre six-cylinder models. The manufacturer's star rose not only in Europe, but in the United States as well where American film stars, politicians and industrialists appreciated the cars. The Minerva had the same quality as the Rolls-Royce, but was slightly less expensive. In 1923, smaller models were introduced; the 2-litre four-cylinder 15CV and 3.4-litre six-cylinder 20CV with standard four-wheel brakes. In 1927, the 30CV was replaced with the 6-litre AK and also a new 2-litre six, the 12-14, was introduced. Large cars continued to be a specialty of Minerva's, and in 1930 the then almost-compulsory-for-the-time straight eight was introduced in two sizes; the 6.6-litre AL and the 4-litre AP. The last Minerva was the 2-litre M4 of 1934 but it did not sell well.

With the financial crisis in the 1930s, the company was restructured as Société Nouvelle Minerva but in 1934 merged with the other major Belgian manufacturer Imperia. Imperia continued to make Minervas for a year and the AP until 1938 and from 1937 badged some of their cars and trucks for export to England and France as Minerva-Imperias. Just before the outbreak of the war, a group of businessmen from Verviers bought out Minerva.

The last model was the 1934 presented M4 with 2-liter four-cylinder engine, which did not sell well. Because of the high reliability of the Knight slider motors, Minerva developed a 9.4-liter V-12 aircraft engine with a power output of 150 hp. Because of the global economic crisis in the 1930s, the company was reformed under the Société Nouvelle Minerva , the New York sales office closed, the London branch reorganized and merged in 1936 with the other Belgian designer Imperia . Imperia produced Minervas and model AP until 1938 for another year . For theExport to England and France, the passenger and trucks were marked as Minerva Imperias.

During the war, the business premises served as a branch of Erla Maschinenwerk , where the Messerschmitt Bf 109 were repaired. On April 8, 1943, it was the target of a bombing that demanded civilian casualties. 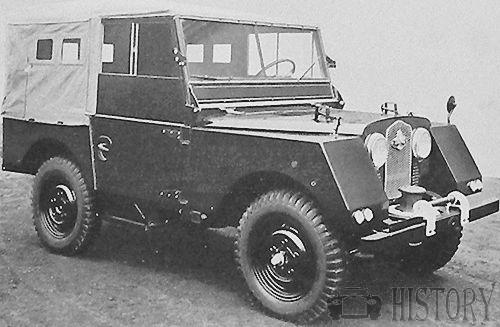 After the Second World War , the company produced until 1953 the British Land Rover under license for the Belgian army. There were plans to re-enter the market for passenger cars, but they never got beyond the prototype stage . The company fought to survive and produced until 1956, the Continental-powered Land Rover C20 .

After World War II the company produced a version of the Land Rover 80" under licence for the Belgian army up to 1954. The 80" model was known as the TT (Tout Terrain). A smaller number of licence built Land Rover 86" were built from late 1953 to 1956. These vehicles had locally built steel bodywork. Some civilian sales of both the 80" and the 86" models were achieved. A number of Land Rover vehicles were also assembled for the Belgian Gendarmerie or Rijkswacht. The Rijkswacht vehicles had the more traditional Aluminium bodywork and front wing shape associated with Land Rover vehicles. A bitter dispute broke out between Land Rover and the Minerva company and this led to a court case, won by Minerva for breach of contract. This was the death knell of the partnership and licence arrangement. After the deal with Land Rover fell apart there were plans to re-enter the car market but these did not get beyond the prototype stage. The company struggled for survival and made the Continental-engined Land Rover-like C20 until 1956.