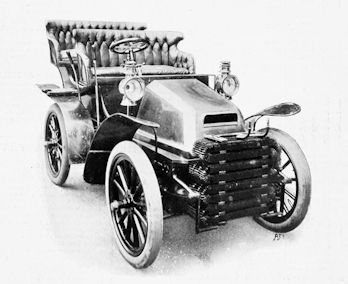 Miesse was a Belgian car manufacturer, which produced from 1894 to 1974 passenger cars and commercial vehicles .

Jules Miesse founded his mechanical workshop in 1894. From 1896, the first vehicles were created. Turner-Miesse acquired a license . In 1927 the production of passenger cars was abandoned and only commercial vehicles were produced.

In 1929, Miesse bought the Bollinckx factory (a manufacturer of gas engines and steam engines since 1890, as well as compressors and pneumatic tools ) in order to expand the truck production by 100 pieces a year. The new company received the company Automobiles Miesse et Usines Bollinckx Société Anonyme . Miesse existed until 1974.

Jules Miesse built in 1896 his first automobile , a steam car . A series production did not begin until 1898. In the following years he made passenger and goods vehicles , of which until 1907 some of three-cylinder - steam engines were driven. These models had chassis made of armored wood and only the steam boiler under the bonnet.

From 1900, the company experimented with gasoline engines.  Famous were in Brussels before the war, the 1904  manufactured taxis from Miesse.

1907, a four-cylinder model was introduced with 3.7-liter displacement. It had a T-head engine with paired cast cylinders and cardan drive . The following year followed by a six-cylinder version with 60 hp (according to former calculation method); Miesse first time used an engine block of a cast ( "monobloc"). 1909 appeared with the type 24/30 a smaller version of it with four-cylinder engine. From 1912 to 1913 there was a 3.7-liter model 20 hp Valveless ("valveless"). This term is usually used for slider motorsused; the 20 hp but had quite valves, but in conjunction with sliders. The system did not prove itself, even the shortly after presented type 15/18 hp with 2.8 liter displacement had a conventional valve control .

The last models before the First World War had side-mounted inline engines, a complex dry sump lubrication and the handbrake no longer had an effect on the differential , but also on the rear wheels. After the  war, MIESSE turned its construction to  of heavy goods vehicles such as trucks, tractors and buses.

Miesse passenger cars after the war had long-stroke ( bore  ×  stroke : 69 mm × 130 mm) OHV engines with 2-liter four-cylinder or 4-liter eight-cylinder engines; both engines had many common parts. Between 1922 and 1926  , the company also established the Dunamis vehicles.With only two prototypes, which were exhibited at the Brussels Motor

With license of TATRA cars in 1935 and after the Second World War, Miesse Nash built passenger cars for the European market with later MAÏCO in around 1956 to devote itself to the production of industrial vehicles, an activity which will continue right up until 1972.