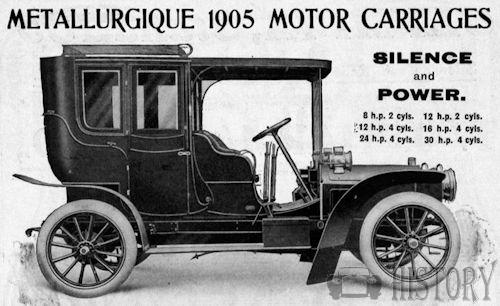 Métallurgique were cars made by SA L'Auto Métallurgique, Marchienne-au-Pont, Belgium between 1898 and 1928. Before making cars, the company had made railway locomotives and rolling stock.

The first cars were 4.5-hp, 2-cylinder models with chain drive, but in 1905 a new modern range was introduced, designed by Ernst Lehmann, who joined them from Daimler in 1903. These cars, with pressed-steel chassis, live rear axle and the option of electric lighting, were to establish the company as one of the finest makers of sporting cars in Europe. In 1906 there came the 4-cylinder, 10-litre 60/80 with inlet over exhaust valves and a claimed output of 100 bhp at 1400 rpm.

Métallurgique cars were also made from 1909 under licence by Bergmann in Berlin, Germany who had previously made electric cars. These were sold as Bergmann-Métallurgique.

After World War I, car production restarted with the 26-hp, which gained Adex 4-wheel brakes, the 20/40 and the 15/20. The first post-war designs arrived in 1921 with the 3-litre and, more importantly, the 2-litre overhead-cam tourer designed by Paul Bastien.

Most Métallurgiques made in Belgium were exported to Britain, and a German factory (Bergmann) was set up, All bodies were by Vanden Plas and were
beautiful creations. A sports version of the 26hp providing 75bhp with the aid of light pistons and large valves, was listed in 1912.

The other big Métallurgiques acquired sporting variants, too, but a small four also arrived, the 10/12hp of 1.7 litres, Sv engines were to be had in the more 'touring' models of 1913.

The 5-litre 26hp was continued after World War l, with the addition of Adex-type diagonally-compensated 4-wheel brakes.

New in 1921 was a 3-litre sports car, though a truly modern Métallurgique arrived in that year; a 2-litre, 4-cylinder fast tourer, in the Post-war French tradition designed by Paul Bastien (who was later responsible for the Stutz Vertical Eight).

The engine used a chain-driven Overhead camshaft, there were front-wheel brakes, and the steering was notably light. This fine machine was the company's mainstay until the acquisition of its factory by Minerva and its machinery by Imperia in 1927. Paul Bastien joined Stutz in America.