The General Motors-owned Vauxhall Motors offered a version of the Fargo as the "Bedford Midi" between 1985 and 1994. Following the sale of the Bedford Vehicles to AWD, the Bedford Midi was re-badged as the "Vauxhall Midi". Versions sold in continental Europe and Ireland were sold under various names, including "Bedford Seta", "General Motors Midi", "GME Midi", and "Isuzu Midi". Between 1983 and 1988, Industries Mécaniques Maghrébines (IMM) produced the Isuzu Midi at its Kairouan, Tunisia manufacturing facility.

Built in Luton, the Midi brought few changes to the Japanese Fargo and replaced the old Bedford CF van. This was very much a stop-gap design to replace the old CF range, however a true CF replacement never came. The van also signified the end of Bedford and its own designs as it was cheaper for GM to use other companies designs it co-owned. There were talks with Freight Rover during 1985 to produce the Sherpa 300 series van under licence which came to nothing by late 1986. There were also concerns over its crashworthiness in this same issue, following a test on the Japanese built WFR. Engines offered were both petrol (1.8 litre and 2.0 litre) and diesel (2.0, 2.2 or 2.4 turbo). The Midi could be ordered with either an old fashioned column mounted gear change allowing a third central passenger seat in the front, or with a conventional floor shift and was available in short and long wheelbase with a choice of standard or high roof lines. A mini-bus version, named the "Albany", was also produced. 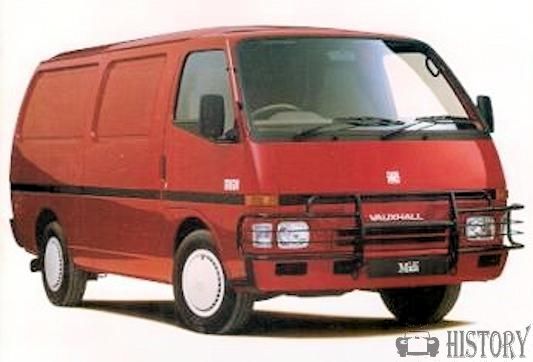 The Midi was also restyled in 1989 and given a new dashboard panel and seating, together with new door trims and front-end fascia. The engine range remained much. While production ceased in 1994, both models were replaced by the Vauxhall Arena, a rebadged Renault Trafic in 1997.