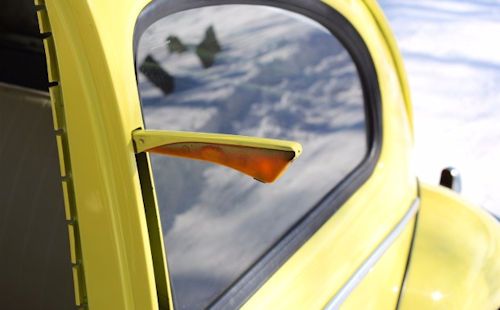 Trafficators are semaphore signals which, when operated, protrude from the bodywork of a motor vehicle to indicate its intention to turn in the direction indicated by the pointing signal. Trafficators are often located at the door pillar.

They first appeared in the 1900s, when they were actuated either mechanically or pneumatically. In 1908 Alfredo Barrachini in Rome had added electric lights inside the arms, that turned on as they extended, but operation was still by a cable system. Electric operation came in 1918 when the Naillik Motor Signal Company of Boston added electric motor drive. This system was superseded by two French inventors, Gustave Deneef and Maurice Boisson, who used a linear solenoid in 1923. The final complete system came in 1927 when Berlin-based Max Ruhl and Ernst Neuman combined internal illumination and solenoid operation.

The shape of the Trafficator arm is closely based upon the shape of the semaphore signal arm used by the Royal Bavarian Railway beginning in 1890. The only difference from the railway arm is that it is halved down its length so as to fit flush with the vehicle's exterior.

They were common on vehicles until the introduction of the flashing amber, red or white indicators at or near the corners of the vehicle (and often along the sides as well). They have been increasingly rare since the 1950s, as ever-tightening legislation has prescribed the need for the modern type of flashing signal. Many historic vehicles that are used on today's roads have had their trafficators supplemented or replaced with modern indicators to aid visibility and to meet legislative requirements.

The turn indicator stalk or turn signal lever is the control lever which operates the turn signal or indicator lights on the front, sides and rear of the vehicle. It is usually operated by lifting or lowering the lever, the direction being commensurate with the clockwise or anticlockwise direction in which the steering wheel is about to be turned.

In left hand drive vehicles, the turn indicator stalks are located on the left of the steering column.

Many other functions have been added to the turn signal stalk. Frequently headlamps and high beam controls are integrated into the turn signal control, the former requiring either a twisting motion or the use of a small switch, and the latter requiring movement of the control fore and aft.

Many modern cars have a "one-touch" feature on their stalks. This is primarily based on (motorway) lane-switching, where a single flick of the indicator will cause it to flash between two and six times.

Some cars have forgone the traditional stalk-mounted indicators for either a switch (as used on a motorcycle) or a button. Examples are the Caterham 7 and the Ferrari 458.