The project for the Audi Cabriolet dates back to around the mid -1980s ,when the project for the second generation of the Audi Coupé, which was to debut in 1987 ,It was in fact in 1989 , at the Frankfurt Motor Show , that the first prototype relating to the future Audi was presented.
Although it had been openly declared as a "study", and therefore as a concept car ,it was clear from the outset that the company intended to dive back into the convertible sector.after a wait that had been going on for almost fifty years when the production of the Audi 920 ceased
also proposed with a cabriolet body. Friedrich Steinbach, formerly in charge of the B3 sedan project(and supervised by Hartmut Warkuß , was appointed as project manager for the new convertible ,while the style managers were Gerard Pfefferle and Peter Schreyer , future head of design at Kia .
batch of twenty-six pre-series units was already assembled in 1990, of which four were all-wheel drive,even if the latter solution a 4 wheel drive will never be proposed in the range.But the actual series production did not start until May 1991, while the final car was presented at the Frankfurt Motor Show that same year.

Structurally, the Audi Cabriolet derives from the Audi Coupé , of which it particularly incorporates the main stylistic look of the car,such as the front is close to that of the fourth generation of the Audi 80 ,rather than the third.and it is no coincidence that the car was presented together with the Audi 80 B4 :The rear end, with its quadangular light clusters, slightly rounded and entirely red,echoed the stylistic theme of the second generation Coupé and the Audi 80 B4.

The inside cockpit area offered space for only four people,as some space at the rear was sacrificed to provide a place for the top to hide when it was folded away.This also involved the sacrifice of a part of the capacity available inside the boot,which with the roof folded and stored in the rear compartment did not exceed 250 liters,while with the car in a closed configuration it could even reach 425 liters(in reality the capacity of 250 liters always remains the same with the top open or closed,having the same compartment separate from the boot).

An Audi Cabriolet in "open" configuration Being derived from the contemporary Audi Coupé ,the Cabriolet therefore shared the floor with the last two generations of the Audi 80 .The mechanical scheme with a longitudinal front engine and front-wheel drive was then confirmed ,with a MacPherson type front endand rear with interconnected wheels,front brakes with self-ventilating discs and rear with solid discs.
Numerous interventions had been carried out on the bodywork, in order to strengthen it to withstand the particular stresses to which an open car is usually subjected.The floor, the windscreen pillars, the door hinges and the front and rear side members were reinforced.
The soft top was a particular subject of care,being made of specially designed stratified plastic material:when folded, it disappeared into a special compartment behind the seats,equipped with a lid flush with the bodywork:the opening and closing operations were rather practical and quick;
the silence in the passenger compartment with the hood closed was good.At its debut, the Audi Cabriolet was only available in a single engine,
consisting of the 5- cylinder unit of 2309 cm 3 capable of delivering a maximum power of 133 hp .This engine could push the car up to 196 km / h of maximum speed:not a very powerful engine, but it was still adequate for the type of car. The gearbox was of the 5-speed manual type.

A post-restyled Audi Cabriolet Production of the Audi Cabriolet took place at the Ingolstadt plant,using the same assembly line as the Audi Coupé ,
while the finishes were carried out in another area of ​​the Bavarian plant.More than a year after its launch, the Audi Cabriolet range was expanded in December 1992 with the arrival of the 174 HP 2.8 V6 followed a month later by the much quieter 116 HP 2.0 E single shaft , with rather inadequate power.to the mass of the car (1 315 kg) which, however, had the advantage of a relatively low purchase price in order to bring the public closer to a convertable from Audi. From February 1993 , the electro-hydraulically operated soft top became available on request.
In early 1994 , the 2.3 liter engine was retired and was replaced by a more powerfull V6 engine of 2598 cm 3 with maximum power of 150 HP.

In June 1995 there were two other significant innovations:one was the introduction of the new 2-liter twin - shaft engine with a power of 140 HP.
However, this engine will only remain avaliable for one year. The second novelty was the introduction of the diesel variant ,conceived solely to propose a particularly economical version of the Audi Cabriolet and therefore anything but devoted to cheerful and lively driving. In fact, its 1.9-liter turbodiesel engine delivered just 90 HP,which in fact accelerated from 0 to 100 km / h in 14 "7

In April 1997 the Audi Cabriolet underwent a mid-life restyling:the bumpers were slightly redesigned and the turn signals embedded in it became white.In the passenger compartment some details changed, such as the format of the digits in the dashboard.
From the motor point of view, there was the arrival of a new version namely the 1.8 with the brand new 5- valve per cylinder engine that allowed it to deliver a maximum power of 125 HP.

Production of the Audi Cabriolet ended in 2000. It was replaced two years later by the new A4 Cabriolet of the B6 series . 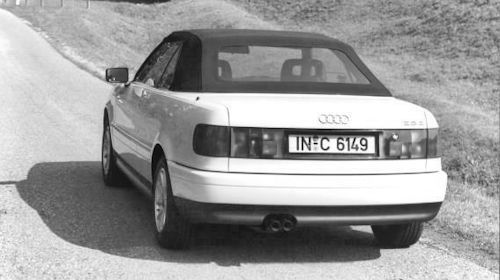