The Audi Avus quattro was a "supercar-styled" concept car from the German car manufacturer Audi. It was first introduced at the 1991 Tokyo Motor Show. The Avus quattro had an aluminum body, which made it a lightweight and safe automobile. This second showing of the new aluminium architecture (after the quattro Spyder a month before) paved the way for the mass-produced aluminium A8 in 1994.

The Avus quattro's engine was supposed to be a 6.0 L 60-valve 12-cylinder engine producing 509 PS (374 kW; 502 hp), capable of accelerating the car from 0 to 60 mph (97 km/h) in about 3 seconds and a top speed of 211 mph (340 km/h). The exact car shown at the Tokyo Motor Show, however, had a dummy made of carefully painted wood and plastic for an engine because at the time, such a powertrain was still in development; Audi-made W12 engines were not available to buyers until Audi presented its flagship A8 a few years later.

The Avus quattro is now on display at Audi's museum mobile in Ingolstadt, Germany. 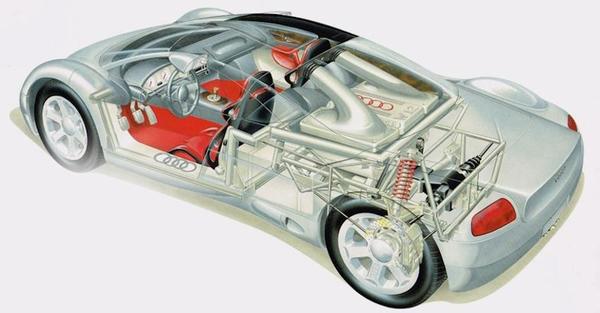