The Audi 50 (known internally as the Typ 86) is a supermini economy car produced by German automaker Audi from 1974 to 1978 and sold only in Europe.

Introduced two or three years after the Italian Fiat 127 and the French Renault 5, the model was seen at the time as Germany's first home grown entrant in Europe's emerging "supermini" class.

The car was offered as a three-door hatchback with a 1,093 cc (66.7 cu in) petrol engine, producing either 37 kW (50 PS; 50 bhp) or 44 kW (60 PS; 59 bhp) for the LS and GL models, respectively. The model was popular in Europe, both because of its generous specifications for a car of the time, and on account of its relatively low price.

The Volkswagen and Audi badged models were sold alongside each other for 3 years until 1978, but the cheaper Volkswagen Polo outsold the Audi 50, and Audi discontinued the Audi 50 in 1978, after a total production of 180,812 units. A planned facelift which would have given the Audi 50 a look closer to that of the Audi 100 and Audi 80 was never implemented because of a holding company board decision that the Audi brand should concentrate on larger, more expensive cars.

The Audi 50 had no replacement in the supermini class until the launch of the significantly larger Audi A2 in 1999 which was also discontinued in 2005. 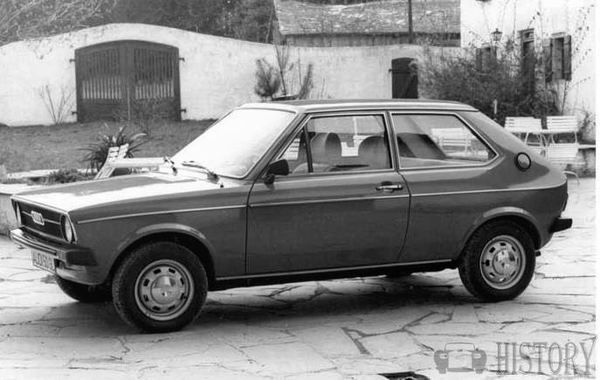