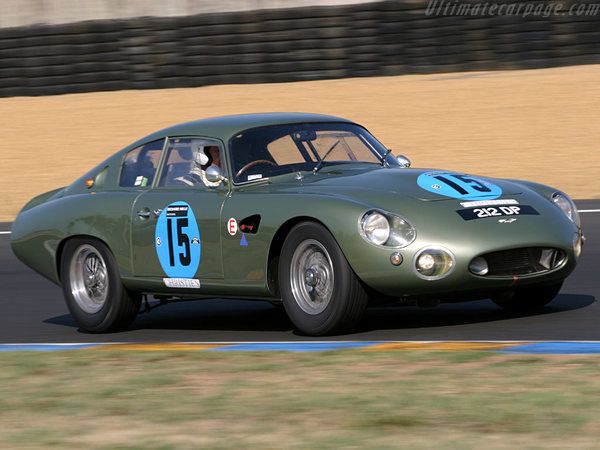 The Aston Martin DP212 was a prototype sports car developed by Aston Martin for use in the 1962 24 Hours of Le Mans.

The car was built on the chassis of a DB4GT, but featured longer bodywork specifically designed to handle the high speeds of Le Mans. It also featured a 4.0-litre Inline-6-cylinder engine, based on the DB4GT's 3.7-litre Tadek Marek unit. Following its participation at Le Mans, the car was slightly modified to feature a Kamm tail design, which would later be used on the Aston Martin DB6.

At the 1962 24 Hours of Le Mans, at the hands of Graham Hill and Richie Ginther the DP212 showed great speed, snatching the lead briefly at the start with Graham Hill driving, coming round at the end of the first lap clear of the field. It then held second place for a while, until delayed by an armature failure. It dropped down the order to retire from 9th place, in the sixth hour (after 79 laps) with a number 6 piston failure, caused when an oil pump pipe fractured. The car however, was having high-end stability problems and could not cope with the high speeds at Le Mans.

Soon after, the car went under wind tunnel tests at M.I.R.A. (Motor Industry Research Association) at Nuneaton, and a rear spoiler was devised. After development the car would return once more, in testing for the 1963 24 Hours of Le Mans, featuring its new Kamm tail, which had been developed to cope with the high speeds. The car practiced for the race, driven by Lucien Bianchi, Jo Schlesser, Richie Ginther and Bill Kimberley but the car would not compete. Its place would be taken by the newer DP214 and DP215, which effectively replaced DP212.

Aston Martin DP212 had many successful races during 1970s at the hands of Mike Salmon. In 1973 the project car returned to motor racing and won twice at Silverstone, and once at Castle Combe, all with Salmon at the wheel. Salmon also won the Classic Car Championship in 1974; with five class wins, one overall win and two second places. In 1975 Mike Ottway acquired the car, however Mike Salmon still continued to race the car.

From 1975 to 1979 the car won many races, most significantly at Silverstone, with one first place overall (1975), two first in class results (1977/78) and a third in class (1976). The car also won many times at Brands Hatch, with a first and second overall in 1977 and 1976 respectively and two first places (1977/78). The car also recorded a 2nd place, in the Group 4 historic Race at the Houbigant meeting at Brands Hatch on 15 May 1977. When Salmon and DP212 demonstrated a wet-weather sure-footedness not matched by the later Ford GT40s and Chevron B8s (amongst others) it was up against, being beaten only by a Lola T70. The last significant result of the car in the late 1970s was a second place in class at F.O.C. Goodwood in 1978.