The Amitron was an American electric concept car built in 1967 by American Motors Corporation (AMC) and Gulton Industries of Metuchen, New Jersey.

The American Motors' prototype Amitron was a snub-snouted three-passenger urban area vehicle or city car with an overall length of only 85 inches (2,159 mm). "The modern looking Amitron was one of the most promising electrics developed in the Sixties." American Motors put more effort into making its prototype electric car attractive, than its competitors.

During the December 1967 public introduction of the car, Roy D. Chapin, Jr., Chairman and Chief Executive Officer of AMC, stated that the Amitron "could eliminate many problems that up to this point have made electric-type cars impractical" A piggyback system of two 24 lb (11 kg) nickel-cadmium batteries and two 75 lb (34 kg) lithium batteries (rated at 150 watt-hours per lb, or 331 watt-hours per kg) developed by Gulton were designed to power the car for 150-mile (241 km) when traveling at 50 mph (80 km/h). This was a big step beyond contemporary lead-acid electric vehicles because of their limited range on each battery charge. The battery designers selected lithium for the Amitron because "it is both highly reactive (easy to oxidize) and has high electromotive potential." Its total battery weight of only 200 lb (91 kg) was also light for electric vehicles.The equivalent in lead-acid cells would weigh nearly a ton (907 kg).

... The established internal combustion engine vehicle manufacturers in the late 1960s did not produce much in the way of electric vehicles. Most could have been easily replicated by any individual, and resembled souped-up golf carts (although the Amitron was in a class by itself—it featured Gulton’s lithium batteries, a solid state controller, 50-mph speed, and a 150-mile range). …

The car's lithium batteries were designed for sustained speeds. During acceleration, the nickel-cadmium batteries would cut in briefly to boost the Amitron from a standstill to 50 mph (80 km/h) in 20 seconds. An "energy regeneration brake" system would automatically switch the drive motors to generators as the car slowed so that the batteries could recharge; thus increasing the range of the car to 150 miles (240 km) This was first use of regenerative braking technology in the U.S.

The first road tests of the power plant were in 1968 using a Rambler American sedan. At the time, American Motors Vice President of Design, Richard A. Teague, was working on a car called "the Voltswagon". The supporters of the Amitron were confident and stated in 1977, "We don't see a major obstacle in the technology. It's just a matter of time."

However, the programs to develop clean-transportation in the U.S. ceased.The Amitron did not go beyond the prototype stage. Its development was significant for the emphasis on various methods to improve performance and range. It had a solid-state electronic CPU to efficiently use power and on-the-road regeneration. Among its unique automobile design features were passenger seats that had air filled cushions, rather than conventional polyurethane (foam rubber). The Amitron was designed to minimize power loss by keeping down rolling resistance, wind drag resistance, and vehicle weight.

American Motors original plans were to offer the Amitron for sale to commuters and urban shoppers in five years, and Chapin said AMC had discussed the venture with its bankers and creditors and "they are about as enthusiastic about it". The Amitron was also well received by the public, but it did not reach the commercialization stage. The expensive batteries forced AMC to halt further experiments with electric vehicles for a number of years.

In 1977, AMC developed a similar electric vehicle called the Electron.

The Amitron's energy regeneration from braking idea was much later commercialized by the Japanese with Toyota licensing the technology to both Ford and Chevrolet for their U.S.-built hybrid vehicles.

The designed has been characterized by some observers as "hot, sexy, cute and practical." "The AMC Amitron had almost 50 years ago all that is still considered indispensable for an electric car if it is supposed to succeed: a decent range, low weight, and a jaunty look. 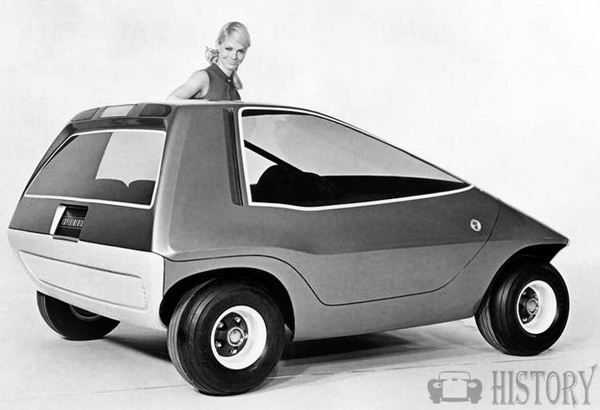