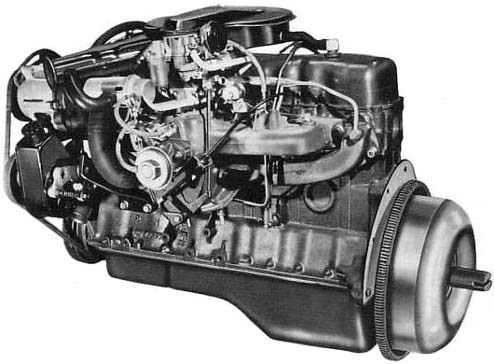 Sometimes referred to as the 196 engine, this engine was originally designed by Nash and introduced in the 1941 Nash Ambassador 600 model. It featured only four main bearings, unlike the 7-main-bearing 234 flathead engine it replaced. It was a flathead design displacing 172.6 cu in (2.8 L). It was later enlarged to 184 cu in (3.0 L), and finally to 195.6 cu in (3.2 L). It was redesigned as an OHV engine in 1956. The flathead version was discontinued for 1956–1957, but reemerged in 1958 as the economy engine for the "new" Rambler American. When the engine was changed to an OHV configuration the water pump was moved from the left side of the engine (driven by a shaft extending from the back of the generator) to the front above the timing chain. When the flathead model was reintroduced it also received the new water pump. Equipped with such high quality parts as forged crankshafts and connecting rods, these engines earned a reputation for remarkable durability. The flathead, however, was prone to the typical flathead problem of overheating under sustained heavy load. This was from the hot exhaust traveling through the cylinder block to the exhaust manifold.

American Motors introduced a die-cast aluminum block version of the OHV 195.6 cu in (3.2 L) engine in 1961. It was produced through 1964. This engine used cast-iron cylinder liners and a cast-iron head. The cylinder heads for the two types of block (aluminum and cast iron) are of similar design, but are not interchangeable. The cylinder head for the aluminum block is roughly 1/8" wider than that for the cast iron block and uses a slightly different head bolt pattern.

The 196 OHV requires more periodic maintenance than newer-model engines. The head bolts must be re-torqued (retightening process) regularly. Factory service manuals recommend that head bolt torque be checked every 4,000 mi (6,400 km) and to re-torque them every 8,000 mi (13,000 km). With modern head gaskets this service interval can be extended to re-torque the bolts every 12,000 mi (19,000 km), or every other year. The cause of the headbolts loosening over time is believed to be thermal expansion and contraction of the head due to the rather heavy design. The head expands and contracts by as much as 0.020" in height during normal operation, this loosens the bolts over time and eventually will cause the seal between head and block to fail. This maintenance is also imperative to prevent the engine from overheating (the first sign of a blown head gasket) and warping or cracking the head. The cast-iron liners in the aluminum block version can also shift if the head bolts are not properly torqued and the engine is allowed to overheat. Good replacement heads and aluminum blocks for these engines are now difficult to find.

The modern era I-6

The company designed an entirely new six-cylinder with a short stroke and seven main bearing crankshaft for 1964. This design was produced in various forms through 2006. The 232 cu in (3.8 L) "Torque Command" inline six was AMC's first modern six-cylinder engine.

To commemorate the engine's May 1964 introduction, 2,520 "Typhoon" cars were made on the Rambler Classic hardtop body. Each featured the 145 hp (108 kW; 147 PS) 8.5:1 compression ratio engine, Solar Yellow body paint, a Classic Black roof, and a distinctive "Typhoon" script in place of the usual "Classic" name. All other AMC options (except engine options) were available.

In 1966, a 199 cu in (3.3 L) version finally replaced the aging 195.6 cu in (3.2 L) OHV and L-head engines. Road tests by Consumer Reports described the new powerplant as "a very smooth and quiet engine, which should give good performance."

After its midyear 1964 introduction in the "Typhoon" two-door hardtop as part of the mid-sized Rambler Classic line, the 232 engine was adapted to fit into the smaller 1965 Rambler American by using a special short water pump, an adaptive piece also used in the 1971–1975 Jeep CJ-5. Air conditioning was available only with the older 196 engine in the American, because there wasn't space for it with the longer 232.

In 1972, the bell housing bolt pattern changed to match the larger version used on the V8 engines.

Changes for the 1976 model year included fuel economy improvements that also reduced emissions and reduced warmup time. This was accomplished by reshaped carburetor air passages that pushed the fuel efficiency of a 232-equipped AMC Gremlin to 30 mpg-US (7.8 L/100 km; 36 mpg-imp) as tested by the United States Environmental Protection Agency, compared to 24 mpg-US (9.8 L/100 km; 29 mpg-imp) in 1975.

The 258 cu in (4.2 L) was produced from 1971 to 1990. It featured an undersquare 3.75 in (95 mm) bore and 3.895 in (98.9 mm) stroke; it was otherwise similar to the 199 and 232. This engine is considered reliable, inexpensive, and torquey. Later 258 models (starting with the 1980 model year for California AMC Concords and Spirits, 1981 for California Jeeps, California Eagles, and 49-state Concord and Spirits, as well as in 1982 for 49-state Eagles and all other applications) are equipped with AMC Computerized Engine Control (CEC) system. For 1981, as part of a weight reduction program (aluminum intake manifold, plastic rocker arm cover), the crankshaft was changed from a twelve counterweight design to four, saving approximately 20 pounds. This engine also found some use in farm/industrial applications such as the International Harvester 4000 swather.

The 242 cu in (4 L) engine was developed by AMC in just 26 months using many off the shelf components while featuring, among others, additional strength, improved combustion chamber, port setup, and cam profile. The total weight of the new engine was 483 pounds (219.1 kg), only one pound more than the 258 six despite its heavier components and parts. For example, the cast aluminum valve cover featured 15 bolts, the industry's most, to achieve a positive seal.

The 4.0 is one of AMC's best-known engines. It was one of four AMC engines kept in production when Chrysler bought AMC in 1987. Chrysler engineers continued to refine the engine to reduce noise, vibration, and harshness. The last in the line of the AMC inline sixes, the 4.0 is regarded as one of the best Chrysler 4x4 off-road engines. A Motor Trend long-term test of a 1997 Cherokee XJ noted "this long-lived OHV powerplant has a reputation for getting people where they need to go" as well as "much love expressed by owners for the torquey 4.0-liter/190-horsepower inline six." The engine is known for longevity, and can sometimes go more than 300,000 miles (482,803 km) without rebuilding. There are many aftermarket parts available.

When introduced, the block-mounted oil filter check valve was eliminated on the 4.0 (along with the 2.5) when AMC engineers standardized their oil filters. The pre-1987 engines had an oil filter adapter with 3/4 and 13/16 threads (which used a GM oil filter common to Buick, Oldsmobile, Pontiac, and Cadillac V8 engines) while the 1987-06 engines were originally fitted with a 20 mm metric thread filter (later revised in 1991 for the common 3/4 threaded Mopar and Ford V8 oil filter).

The first 4.0 engines in 1987 had a RENIX (Renault/Bendix) engine management system considered quite advanced for their time. A knock sensor allowed the ECU to control spark advance in response to fuel octane and engine load. Unfortunately, there are few scan tools capable of interfacing with the system to pull diagnostics codes. RENIX systems also have no permanent memory for diagnostics codes thus making the diagnosis of intermittent problems more difficult.

In 1991, a Chrysler fuel injection system replaced the RENIX system, and the intake ports were raised approximately .125 in (3.2 mm) for a better entry radius. Chrysler also enlarged the throttle body and redesigned the intake and exhaust manifolds for more efficiency, and the fuel injectors were replaced with higher flow units. Camshaft timing was also changed. The net result was an engine that made 190 hp (142 kW; 193 PS) and 225 lb·ft (305 N·m). Badging on most Jeeps equipped with this engine read "4.0 Litre HIGH OUTPUT." The new cam profile combined with altered computer programming eliminated the need for an EGR valve and knock sensor, but made the engine more sensitive to alterations, especially where emissions are concerned.

Small changes were made to the cylinder head for the 1995 model year. In 1996, the engine block was redesigned for greater strength. The new block had more webbing and a stud girdle for added rigidity of the crankshaft main bearings. Engines installed in 1999 Grand Cherokees carried the "PowerTech" name that had been used intermittently in prior years and on other Chrysler truck and SUV engines. The name was subsequently passed on to 4.0s in the other Jeep models that used the engine, the Cherokee and Wrangler. The cylinder head was again changed for the 2000 model year to a more emissions-friendly design. This head was designated as "0331" in the casting number. Early 0331 heads are prone to cracking, causing coolant to contaminate the oil, which can lead to catastrophic engine failure. The head cracks in the center between #3 and #4 cylinders. The crack is usually discernible with the valve cover removed as a "milky" tan line. This condition is usually discovered before catastrophic engine failure, but can lead there if not corrected in a timely manner. The casting was fixed in mid to late 2001, but the same casting number was retained. The "fixed" heads have "TUPY" cast in the center where the cracks used to occur.Also new for the 2000 model year, was the distributorless, coil on plug ignition system Option code: ERH.

The 4.0 engine was discontinued at the end of the 2006 model year, replaced in the redesigned 2007 JK Jeep Wrangler by Chrysler's 3.8 L OHV V6, which originated in the company's minivans. The 4.0 engine was also made in China, where a slightly modified version of the XJ Jeep Cherokee with 2.5 and 4.0 engines were produced alongside the Chinese-produced WJ Grand Cherokee since 2006.

This engine was used in the following vehicles:

The 1971 and older blocks use a "small" bell housing bolt pattern that is exclusive to AMC and small Nash sixes. In 1972 the bell housing bolt pattern was changed to match the AMC V8's - its final use was in 2006 when the 4.0 was phased out. Four bolts on the cylinder block are matched to the transmission bellhousing where an adapter plate serves both as a dust cover - two additional bolt holes on the transmission bellhousing used on the AMC V8 are used to secure the dust cover. The 1971 258 uses the "small" pattern, the only year 258 to do so.