The Alfa Romeo 164 (Type 164) is a four-door executive sedan manufactured and marketed by the Italian automaker Alfa Romeo from 1987 to 1998.

Pininfarina's Enrico Fumia styled it. The 164 was the final model produced while Alfa Romeo was still a totally independent corporation, and it was publicly presented a few months after Fiat purchased the firm. It was unveiled at the 1987 Frankfurt Motor Show.After 273,857 units were produced, the 164 was replaced by the Alfa Romeo 166 in 1998.Project 164 was originally known as Project 154, which was finished in 1981, a year before 164 was completed as a 1:1 scale model. It was then modified in 1982 to fit on a Tipo 4 chassis.

The Alfa Romeo 164 was created by Pininfarina's Enrico Fumia in 1982. The 164, especially the late-model "long nose, square light," may be seen as a natural progression and successor to the Alfetta.

The 164 was the first Alfa to make substantial use of computer-aided design for calculating structural stresses, resulting in a body that was extremely robust while being relatively light. The Type Four platform, which the 164 shares with the Lancia Thema, Fiat Croma, and Saab 9000, was developed from the 164. The 164's bodyshell was the most aerodynamic of the four, with a noticeably sleeker profile and reduced coefficient of drag due to its late arrival on the market. An special front suspension was built to allow for this design difference.

The interiors are characterized by anatomic seats, with standard velvet upholstery , optional in leather (1987 range), adjustable in height and, in some versions, with lumbar support. Detail of the interior of this flagship is the center console, with countless keys arranged rationally, including: automatic climate control controls, with air flow adjustment, rear and front fog lights, emergency lights, trunk opening, fuel cap opening and suspension adjustment electronic (optional on some versions). There were also digital displays, which after the 1992 restyling will become larger and more functional. In the lower part of the console were the radio compartment and the compartment for the ashtray (both with assisted opening),

At the rear, an optional electric adjustment of the rear seats was provided, which could be operated using the buttons on the central tunnel.

In front of the passenger there is a very large glove compartment equipped with a courtesy light. The instrument cluster includes: tachometer , speedometer and odometer , a series of warning lights that extend horizontally throughout the instrument panel and, below, battery voltage indicator (or turbo pressure in 2.0 Turbo and TD versions) oil pressure , water temperature and fuel level.

The steering wheel is adjustable both in height and in depth.The interior is equipped with front and rear armrests, 6 speakers, and retractable sun blinds on some versions. The interior is carefully designed and assembled and the soundproofing of the cabin is top notch.

During the ten years that the 164 remained in the catalog there were two major restylings. The first took place in 1990 and concerned some interior details, from the coatings, to some details such as buttons of the central tunnel up to the new management of the air conditioning. From a technical point of view the suspensions were improved and the trim was lowered by 3 cm. At the beginning of 1992 with the presentation of the new 155 medium, the specific displacement of the 2.0 Twin Spark went from 1962 cm³ to 1995 cm³ to rationalize production.

Towards the end of 1992 there was the best known restyling. This review included two variants, including the one called "Super" which saw more modifications on the outside. Externally, there were new bumpers and side bumpers surrounded by chrome strips, new front headlights, restyling of the front shield, new electric mirrors with the possibility of folding from the inside and new wheel rims with sizes up to 16 inches. Inside, the graphics of the instrumentation were redesigned, the central console including the push-button panel was modified, as well as the central console and related controls. The door panels, also restyled, presented new coatings and new accessories, in particular for the Italian market the adoption of airbags driver and passenger side, already present in the versions exported overseas.

The 164 Quadrifoglio Verde (badged as the 164 QV) was available from 1990-1992 as the top of the range model. It featured an extended front spoiler, deeper side-skirts and a deeper rear apron. Inside, the 164 QV featured sculpted sports seats and mechanically the car featured an up-rated 3.0 12V V6 (147kW vs 132kW for the standard car) and adjustable damper settings. This was the only 164 available with a manual transmission in Australia. From 1992 this version was available with new 24V V6 engine.

In 1993, Alfa introduced a four-wheel-drive variant called the Q4 (short for Quadrifoglio 4), which was equipped with an even more powerful version of the 3.0L V6 engine. The Q4 four-wheel-drive system (Viscomatic) was co-developed with the Austrian company Steyr-Puch The system was very advanced when compared to other 4WD systems at that time. The system consisted of a viscous coupling unit, central epicyclic differential and Torsen differential in the rear. The whole system is connected to ABS and Motronic units. The power driven to the rear axle is continuously variable from 0 to 100%, so the car can be fully front- or rear-wheel-drive as conditions require. Torque is distributed between axles depending on the speed, turning radius, engine rpms, throttle position and ABS parametrics. This model was equipped with a Getrag 6-speed manual gearbox.

Among the petrol engines in 1987 were available the 148 bhp 2-liter Twin Spark twin-shaft and the 192 bhp 3.0 V6 12v commonly called "Busso" after the designer who conceived it, Giuseppe Busso . The year following the presentation, the 2.0 4c was also marketed, supercharged by a T3 turbine with an overboost device and cooled by an intercooler derived from Lancia Thema Turbo. Compared to this, the Alfa Romeo engine lost the balancing countershafts and gained 10 HP, thanks to the use of a two-stage overboost.

In 1991 there was a significant leap in performance and technology with the entry into production of the innovative 2.0 V6 Turbo. This engine was derived from the atmospheric 3-liter version of the V6 "Busso" - which already powered the 164 3.0. Characterized by aluminum cylinder heads and monobloc and fully electronically managed, initially supercharged by a Mitsubishi / Piaggio TD05H turbine equipped with an overboost device and cooled by an intercooler, the same as the Lancia Delta HF Evoluzione . The powerwas 210 HP and thanks to the overboost - which allows a momentary increase in the boost pressure to cope with sudden requests for power, especially useful for the request for strong accelerations also useful in overtaking - the engine torquewas increased for several seconds to 30.6 kgm and with it also the power compared to the declared value. These numbers allowed a top speed of over 240 km / h, making the 164 V6 turbo one of the fastest sedans of the time, even if even more important was the acceleration (not so much when stationary, as it suffered from turbo lag and of poor traction at the start, but that noticeable in particular in the revs between 4 000 and 6 250 rpm). The monthly Quattroruote in 1991 noted a maximum speed of 241,800 km / h; the 0/100 km / h sprint in 7.4 seconds and the kilometer from standstill in 27.60 seconds. AUTO magazine in the March 1991 issue noted a top speed of 239.2 km / h; the 0/100 km / h sprint in 7.69 seconds and a recovery in 5th gear from 80-120 km / h in 9.04 seconds.

In 1992 Alfa put into production the new 3.0 V6 24v initially with 210 HP power. The turbo V6 was slightly weakened on paper (for marketing reasons) in order not to overlap the 3-liter versions in the catalog, even if it still retained higher performance cues than the aspirated one, despite the turbocharger being replaced with a "smaller" Garrett T25 which it had to allow a higher ride comfort when the turbine was activated and a lower turbo lag. Later the will of the top management became to continue in the direction of aspirated engines, as the Italian VAT tax (which weighed 38% on cars over 2 liters) was unified for all displacements. at 20%, and due to the higher component costs required by compressed turbo engines.

The Alfa 164 was also available with two Diesel engines which were supplied by VM Motori , an Italian company from Cento(FE). both had a displacement of 2.5 liters and developed a power of 117 hp (84 kW) in the first version up to 1992 (Euro1) and subsequently 125 hp (92 kW) in the post '92 version (since it was also adopted on the 155 ). These engines (having the initials Vm84A) were also used at the time on other cars, such as Range Rover Classic, Chrysler Voyager, Ford Scorpio, Jeep Cherokee and other cars; they had the particularity of having cascade distribution of gears (instead of belt or chain, like most of the engines made in that period), with the valve control with rods and rocker arms, and the heads made up of 4 separable heads (single point weak of these engines, because the individual cylinder heads suffered from an overheating problem due to the poor recirculation of the coolant condensates). Despite some problems with the cylinder heads, these engines have been and are among the most robust and reliable.

The VM engine allowed the Alfa 164 to reach over 200 km / h, and was elected the fastest diesel engine in the world when it was presented.

The Alfa 164 TDs had the same equipment as the 164 Twin Spark petrol engines, however, unlike the latter, the turbo pressure indication was present in the dashboard. 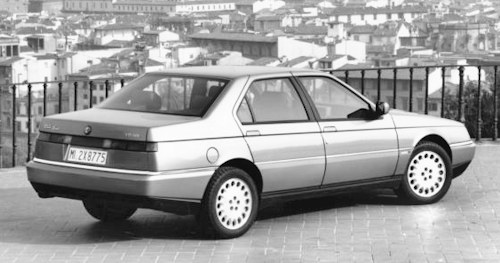