1934 followed the four-axleAEC Mammoth Major 8 , which could carry a payload of 15 tons. Neither the condition of the roads at the time nor existing technologies allowed for high axle loads . The only way to increase the payload was therefore to increase the number of axles. The concept of the four-axle truck was first introduced in 1929 in steam-powered vehicles. The Mammoth and the AEC Mammoth Major 8 remained in production until 1935, the Mammoth Major until 1939.

The first generation was replaced by the series 366 (three-axle) and 386 (four-axle) from 1935, which were produced until 1948. This also designated as Mk II series was replaced in 1948 by the Mk III. Constructively similar design, the new vehicles now had a front handlebar assembly by Park Royal . After the takeover of the competitor Maudslay in 1948 AEC offered the Mammoth for a while under this name. At the Commercial Motor Show in 1958, AEC introduced Mk V before  The Mk V differed from its predecessors by a new cab, new engines, recessed front axles, an improved brake system and a new rear axle construction. The older Mk III was manufactured 18 months in parallel with the new version before its production was finally discontinued. One of the four-axle's largest customers was British Road Services . Mk V built more than 6000 pieces. 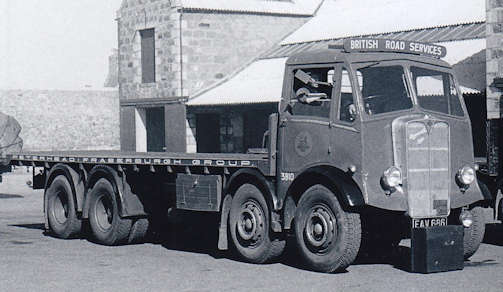 1965 appeared the last series of Mammoth with a new cab. This cab called ergomatic cab , also available for other trucks , had already been introduced by AEC at the 1964 London Motor Show . For the first time also a three-axle with two steerable front axles was offered.

The vehicles were equipped during the long production time with various four, six and eight-cylinder diesel engines from AEC , Leyland Motors and Gardner . Various manual, four-, five- and six-speed transmissions with and without overdrive were used. Older vehicles have often been remotorized, often with non-type components installed to better adapt the vehicles to the needs of their owners. In addition to the widespread cabs, the chassis was also offered as Langhauber. In addition to flatbed trucks were mainly tankers and dump trucks widespread.