First produced in 1910 by the London General Omnibus Co, the B type is a normal control chassis designed to carry open-top double-deck type bodywork. Its chassis is built of ash with flitch plates of nickel steel on both sides of the wood, and it has a wheelbase of 12ft 10in, although this measurement was varied slightly during its years of production. Solid tyres are fitted. Originally the B type had a 25hp 4-cylinder side valve petrol engine, although this was superseded by a larger 30hp unit, and later still by a 45hp engine. Transmission is by a cone clutch and 4-speed silent chain gearbox to a massive worm gear fully floating live rear axle.

In 1912 the LGOC renamed its bus building division, this becoming AEC, and B type construction was continued under this new label. In the same year, the B type chassis began to appear with single-deck bodywork, although the chassis was identical to that used for the double-deckers.

A total of 900 of the buses were used to move troops behind the lines during World War I.After initially serving without any modifications and in their red-and-white livery, they were painted khaki.It was soon found that the glass windows on the lower deck were prone to breakage, mostly from contact with the men's rifles and packs. The glass was therefore removed and replaced by planks nailed to the sides of the vehicle.

The B-Type could carry 24 fully equipped infantrymen and their kit. Some were converted into mobile pigeon lofts to house the pigeons used for communication along the front. They served until the end of the war when they were used to bring troops home.

When production of the B ended in 1919, over 3,200 had been built, although not all were constructed to carry bus bodywork. 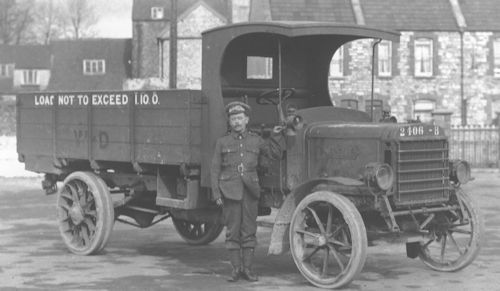