The Speedster is based on the Lotus Elise , was manufactured in the Lotus factory in the England and carries the internal name of the Lotus Type 116 . The British Opel sister compny Vauxhall sold it as the Vauxhall VX 220 .

In March 1999, the car was presented at the Geneva Motor Show . The first Speedster left the Hethel factory in March 2001 as a silver model with the 2.2-liter naturally aspirated engine.Originally, a contingent of 10,000 vehicles was planned for series production. Since the demand did not meet expectations, the production was discontinued on July 22, 2005 after 7207 copies built. 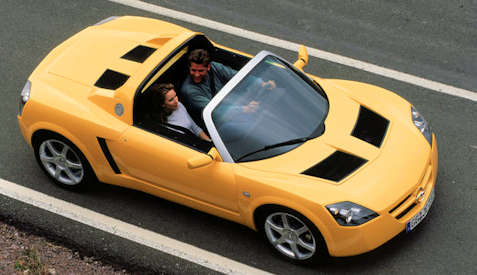 In the United Kingdom, the Speedster was sold under the name Vauxhall VX 220 (2.2 liter displacement) and VX 220 Turbo (2.0 liter displacement) with almost the same appearance. The obvious differences were limited to the various logos and type designations on the vehicle. Initially, the same engines as in the Opel Speedster were used, followed at the end of 2003 then the sportiest production version, the Vauxhall VXR 220 (162 kW / 220 hp and 210 lb ft / 285 Nm) with an uprated version of the turbo engine, Lotus sports seats, Speedline Wheels (Front 16- and 17- inch wheels on the rear axle), semi- slick tires from Yokohama , customized ABS and optionally an Öhlins - coilover . The VXR models were numbered consecutively and limited to 65 pieces (whereby also a No.00 for the Vauxhall Museum was made), 61 or 62 pieces were delivered in the color Calypsorot and one vehicle each in the colors Moonland Gray , Brilliant Yellow , Chagall blueand sapphire black .

Characteristic for the Opel Speedster are its Spartan interior, the low height of 111.7 cm, the acceleration (0-100 km / h in 5.9 seconds) and the sporty driving characteristics. The top speed is 217 km / h, the curb weight only 870 kg, the maximum load 205 kg.The in-line four-cylinder Ecotec engine (Z22SE) with 2198 cc (2.2 l) capacity of the Speedster produces 108 kW (147  hp ) and has a maximum torque of 203 Nm. He was also in the Zafira A , Vectra B and C and the Astra G used. The engine is transversely front mounted the rear axle, therefore 63% of the weight rests on the driven rear wheels. The wheels are individually located on double wishbones hung, the four disc brakes are internally ventilated.

The chassis is made of aluminum, but largely not welded, but screwed / riveted and glued, which gives the vehicle a high rigidity. The underbody is completely covered. The non-self-supporting body is made of glass fiber reinforced plastic . As standard, a fabric roof in the colors black, red, blue or green, for an additional cost was also a hardtop made of fiberglassavailable. Standard was still an alarm system and an adjustable lumbar support in the bucket seats, which could be ordered either with black fabric or leather in red, black, beige, blue or green.

The Speedster has no spare wheel (not even a spare), but a puncture spray to seal tire damage.The occupants are protected by an integrated roll bar . In addition, a driver airbag is integrated in the 32 cm Momo steering wheel, there is no passenger airbag.The only electronic tool is ABS , traction control and power steering is omitted. The throttle valve is electronically controlled, the gearbox is switched manually via cables and the steering is a rack and pinion steering .The trunk accessible via a small opening holds 206 liters of luggage.

The Opel Speedster was available in the university liveries black, calypsorot, british racing green and colmar blue. For a surcharge, a two-layer brilliant finish in yellow, a two-coat metallic finish in silver and two-coat mineral finish in Mandarin, European blue, rabiatarot, capriegelb and Le Mans green were available.

In order to make the vehicle, which tends to oversteer over the tail in the border area , easier to handle for a broader public, the Speedster was delivered to the front only with a 175er tires on 5.5 × 17 rims. This leads in normal operation rather to understeer , that is, the car pushes over the front wheels. However, this is the reason why the Speedster is difficult to control during fast load changes, as it suddenly switches from understeer to oversteer. Many Opel Speedster were therefore equipped with other tires.

As of September 2003, there was a 2.0-liter turbo version (Z20LET, 1998 cc capacity, 8.8: 1 compression bore and stroke each 86 mm) with 147 kW (200 hp) and 250 Nm of maximum torque. The Speedster was offered at the end of its construction period exclusively with this engine, which also existed in the OPC models of the Zafira -A and Astra G (sedan and caravan ) and in the Astra-G Coupe and in the convertible. The weight of the car increased, among other things because of the heavier engine to 930 kg. It accelerates the vehicle from 0 to 100 km / h in 4.9 seconds and the top speed is 243 km / h.

The turbo version had a more neutral tuned chassis, other wheels, a water-oil heat exchanger , a front grille without bridge and side panels with flared air inlets and a Heckabrisskante to reduce the buoyancy. There are also differences in the headlights, rear lights (black inside instead of silver) and the hardtop. Because of the turbocharger on the mid-engine , the trunk in the tail was slightly smaller.The interior has been upgraded: So were in conjunction with available at extra cost leather seats and the shift console and the inner door trim of the Speedster Turbo covered with leather. The instrument cluster had the turbo a switching lamp, a LCD bar graph display instead of the digital display for the tank contents and a slightly modified design.

From the Speedster Turbo there was a limited edition of 60 copies special version " Scorpions ", named after the Hanoverian band of the same name . This variant differed only visually from the normal Speedster (black painted wheels, black instead of silver windscreen frame, "Speedster Scorpions" instead of "Speedster Turbo" lettering at the rear and "Scorpions" lettering instead of the engraved four-digit limit number in the dashboard). Was delivered only in silver metallic painted Scorpions variant with an electric guitar Gibson Flying V, which had signed the band, as well as an almost complete equipment (floor mats, footrest, black leather interior, hardtop, central locking and CD radio).

In addition to the production version of the Opel Speedster 2002 on the Paris Motor Show also, from a 1.3-liter common rail - diesel engine introduced driven study. The so-called Eco Speedster had a top speed of 250 km / h and consumed 2.5 liters of dieselon 100 kilometers. During a 24-hour test drive in July 2003, the Eco Speedster set 17 international records. It came to 55 minutes before the end of a dramatic finale, as the vehicle with electronics problems headed for the box and the engine did not start again. The driver team, which had previously set 16 of the 17 international records, decided to push the Eco Speedster the final round. The final driver finally moved the record vehicle over the finish line by means of a starter. 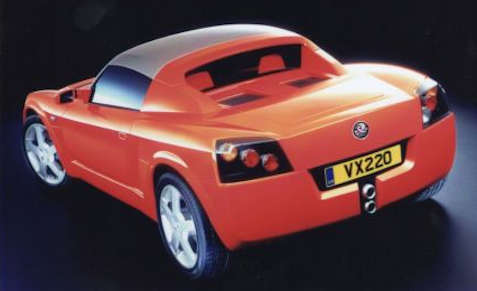