The Opel Vectra B was a mid- size Opel vehicle built between October 1995 and April 2002 . Initially available as a sedan with a hatchback, came a year later for the first time since 1975 again a station wagon under the sales name "Caravan" in the mid-size segment of Opel on the market. From March 1999, the series was distributed in a revised facelift version .In April 2002, this was replaced. by the Vectra C

In the period from 1995 to 1999, four different equipment variants were offered:Vectra base (including "BelAir" and "Beauty")Vectra "CD"Vectra "Sport" (from 1.8 16v (see below))Vectra "CD Exclusive"; also "CDX".

The Vectra "Sport" received some sports components from Irmscher, So this had initially a standard 16 "x 7J (205/55 R16) tires with so-called" twin-spoke "(twin spokes) aluminum rims, as well as a sporty suspension, which lowered the vehicle compared to the other equipment lines. Depending on the year of construction, two different sport suspensions were installed (sports suspension "irmscher" 30 mm lower [Red Springs, 1995-1998], original Opel chassis 20 mm lower. From summer 2001, the sports version with modified front and rear bumpers, parts leather seats and 17 "aluminum wheels delivered.Sport carbon stripes on B and C pillars and darkened flashing and reversing lights in addition to the sport also the CD Exclusive and the special models i500 and i30 . "Base" and "CD" were equipped with B and C pillars in body color as well as with white flashing and reversing lights. From the Facelift were sold as standard all models with darkened flashing and reversing lights.

Tthe X18XE engine has been replaced by the X18XE1 , and the remaining engines (model year 2001) have been partially revised, replaced or improved. In addition, the diesel engines have been revised and introduced new units, such. B. the 2.2 DTI.The Vectra was available with a total of seven different gasoline engines.

The direct-injection diesel engines are all equipped with a maintenance-free timing chain, so that no cost-intensive timing belt replacement is required. The complex technology was able to successfully undercut the standard consumption of the TDI engines from the VW Group, but were initially designed weaker in terms of torque and power than this. Problems arose in the early days with turbochargers, oil consumption and repeatedly with the mass air flow meters and injection pumps (model VP44) from Bosch . The motors themselves are considered robust and durable. The subcontractor was the Japanese car company Isuzu at the 1.7 TD , the 2.0- and 2.2-liter direct-injection engines were self-developed and built in Kaiserslautern.

The Vectra i500 is a modified by Irmscher model with front and rear apron and side skirts and rear spoiler in the style of the former STW Championship. The modified 2.5 V6 engine (X25XEI) produces 143 kW (195 hp). In the interior there was instead of the black plastic in titanium colors painted console covers and extensive standard equipment with Irmscher sports steering wheel. A sporty suspension, with body lowered by 20 mm, and 17 "- BBS aluminum wheels complete this sports version of the Vectra.It was available as a sedan or caravan and was built from December 1997 to August 2000.

There was also a Vectra i30 (Officially there should be 30 pieces, but there were only 23 estates built and sold) with a 3.0 V6 engine (X30XEI), which provides 162 kW (220 hp). He looked up to the grill without Opel logo and the 17 "-Irmscher-Twin-Spoke aluminum wheels like the i500.The i30 was a limited special model for the 30th anniversary of the company Irmscher from Remshalden Equipment at about DM 90,000.00 In addition to the i30 caravan, there were two sedans: First, a model of 1996, which served as a test vehicle for the i500 and later then for the i30 .

There was also a revised model in Starsilver, the iS3 . This model was shown at the Essen Motor Show and also had the 220 hp 3.0-liter V6 engine. Externally, he was except for the radiator grille and the 18 "wheels with the i500 same, the interior was customizable on request with different colored leather appointments. From summer 1995 until the beginning of 2002 there was a sports version, but - as well as the model "CD-Exclusive" only from the 1.8 16V engine - to recognize: tinted taillights (red / black), which also had the CDX, and Irmscher Twin -Spoke aluminum wheels in 16 ", aluminum / titanium look in the interior and carbon look * on the doors.From the summer of 2001, the sports version with modified front and rear bumpers, parts leather seats and 17" aluminum wheels.

For the North American market, the Saturn L-series was developed on the basis of the Vectra B as a four-door sedan and a five-door station wagon. In Australia he was offered as Holden Vectra , in the UK as Vauxhall Vectra, in Brazil as Chevrolet Vectra. The only difference was the front grill and the emblems. However, there were also minor changes typical for the market (eg clear-glass taillights on the Chevrolet). 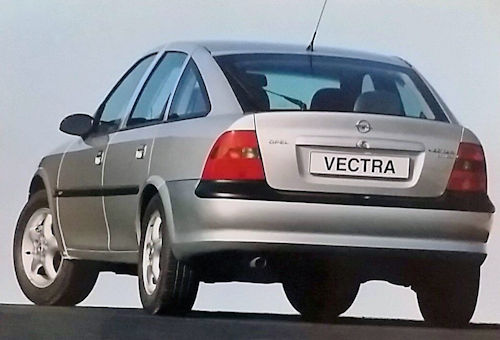