The Vauxhall Opel Corsa C was from autumn 2000 to summer 2006 built by Opel and General Motors a small car , which replaced his predecessor the Corsa B .

For the market launch in November 2000 Opel offered the Corsa C as a 1.0-liter with 58 hp, 1.2-liter with 75 hp and 1.4-liter with 90 hp. The new EasyTronic, an automated manual transmission , was initially available only in conjunction with the 1.2-liter engine, and later for the 1.0- and the 1.4-liter gasoline engine, and the 1,3- liter diesel. The 1.3 CDTI is - at the time of its presentation - the smallest four-cylinder common-rail diesel engine in the world and is also available in the Opel Astra with 66 kW. This engine, developed with Fiat and used among others in the models Panda , Punto and Grande Punto , gave the Italians the title of Engine of the year 2005 .In February 2001 followed the 1.8-liter GSi with 125 hp.

From the beginning of 2001, there was a diesel with 1.7 liters displacement and turbocharger with intercooler . This had 75 hp. The ECO was also offered again - and with the same engine as the previous model.In the summer of 2002, a small facelift, whereby the Corsa C received a chrome clasp on the front grille and other little things were changed.

In August 2003, a larger the Corsa C was facelift , given mainly modified the bumpers in and the rear fog lamp is placed deeper. In addition, the headlights (ellipsoid headlights) and the chrome clasp in the grille have been changed.

The Corsa C was in October 2006 by the Corsa D replaced. Only in some countries, for example in Israel , Saudi Arabia , South Africa and Taiwan , the Corsa C was later replaced by a newer model. In South America exists with the Chevrolet Montana a pickup variant of the Corsa C.

The Opel Corsa Sedan , which was built by General Motors Egypt , even remained in production until 2009. Also in South America, the Corsa B is still being built as a classic parallel to the Corsa C. In Japan as well as in East Africa , the third generation of the Corsa is known as the Opel Vita .The Opel Corsa C, Tigra Twintop , Meriva and Combo used the same platform.

After facelifting in the summer of 2003, the Corsa's 1.0 and 1.4 petrol engines were replaced by Twinport technology-Opel's fuel-efficient part- load technology, with two separate intake ports per cylinder, one of which can be closed by flaps. By using the "Twinport" system, the engine output of the 3-cylinder engine increased by 2 hp to 60 hp (Z10XE has 58 hp). Nevertheless, the consumption dropped and with economical drivingthe brand reached 4.5 l / 100 km. The 1.2-liter engine has 4 cylinders and made 75 hp (Z12XE).

Only from model year 2005, this engine was replaced by the corresponding twin port (Z12XEP: 80 hp). However, the 1.8 engine remained unchanged and is now also available, for example, in the model variant Sport. The GSi, however, became a mere model variant, now available with the 1.4, 1.8 and 1.7 CDTi engines. From the facelift there was the Isuzu engine 1.7 DTI (Opel designation Y17DT, 55 kW, 165 Nm) with common rail injection under the designation 1.7 CDTi (Opel designation Z17DTH, 74 kW, 240 Nm). The engine was also installed in the Astra H and in some Honda cars .Furthermore, the small diesel 1.3 CDTi with 51 kW was introduced at the same time, which is a Fiat Powertrain development.

All engines meet the Euro 4 standard . Stars in the Euro-NCAP - Crash test 4.stars 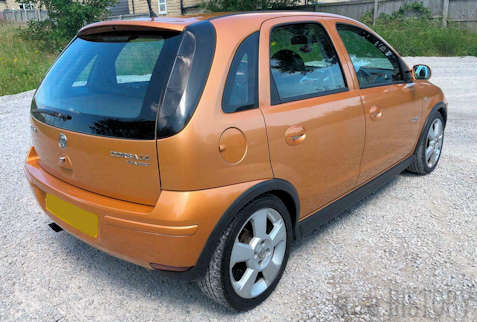