The Astra J is based on the General Motors' Delta II platform and debuted at the 2009 Frankfurt Motor Show in Germany. The car has taken most of its styling from the new Opel Insignia, with many of the higher options fitted as standard. Full production came on line at Vauxhall's Ellesmere Port Plant at the end of September 2009. Deliveries began in December 2009. Originally referred to as the "Astra I", it received the "Astra J" name instead to avoid confusing the letter I for the number 1.

The Opel Astra came third in the European Car of the Year award in 2010. 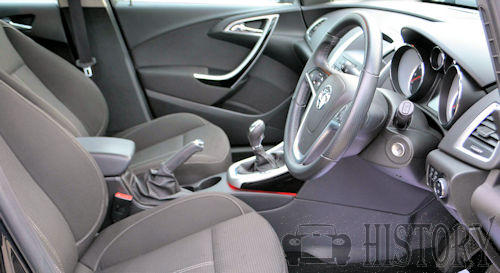 The station wagon version of the Astra - dubbed the 'Sports Tourer' by Opel, debuted at the 2010 Paris Motor Show, and went on sale shortly afterwards, with a starting price of £16,575 for the ES version, then Exclusiv, SRI and SE versions, with the SE costing from £20,345. This is cheaper than the previous estate, but has more standard equipment. The adoption of the "Sports Tourer" name finally brought to an end Opel's traditional "Caravan" designation for its station wagon derivatives.

Shanghai GM launched the Chinese version of the Opel Astra hatchback, which is badged as the Buick Excelle XT. This car went on sale in January 2010. Three engines were announced: Ecotec D-VVT 1.6 L, 1.8 L and 1.6 L Turbo.

The saloon version of the Astra was first presented at the 2012 Moscow International Automobile Salon. The 4-door saloon has a number of names depending on market: Buick Excelle GT in China, Buick Verano in North America and Opel Astra sedan/saloon elsewhere. This version is not sold in the United Kingdom, although it is available in some other right hand drive markets, such as Ireland (as the: Astra Saloon), Malta, and South Africa.

A 3-door version dubbed Astra GTC was introduced in July 2011. Externally, it retains very few design elements of the old 5-door model. It has a sportier appearance, with a much more 'sculpted' chassis. It features a HiPerStrut front suspension from the Opel Insignia OPC which helps alleviate torque steering. A Watt's linkage is present in the rear suspension, to minimize lateral movement of the axle. The wheelbase is enhanced to accommodate wider low-profile tyres. Similarly to the Astra H GTC, a 'panoramic windscreen' option is available. The Astra GTC was awarded a 5 star rating for its performance under Euro NCAP safety tests. In late 2013, a new 1.6 Turbo EcoTech engine with 200PS output replaced the older 180PS engine of the same capacity, meaning the 1.6 Turbo replaces the BiTurbo Diesel as the fastest non-OPC model in the range.

The GTC is built in Gliwice, Poland, with a range of models & petrol and diesel engines. In the UK, the GTC includes the SRi and VXR models.

The OPC trim of the Astra GTC has been available since 2012. This car features a turbocharged 2.0 L direct injection engine with a power of 206 kW (280 PS; 276 hp) and torque of 400 N·m (300 lb·ft), HiPerStrut front suspension, a mechanical limited slip differential, an electronically controlled FlexRide active suspension, and Recaro-style sport seats, OPC badge on gear knob, steering wheel, and on instrument dials and different and distinctive front and rear bumper, rear standard spoiler as well as optional OPC spoiler compared to GTC version. It comes with 19 inch alloy rims as standard and optional 20 inch alloy rims which are lighter than those 19 inch. 0 to 100 km/h (62 mph) time is 6 seconds and top speed is limited to 250 km/h (155 mph).

This generation Astra was not available as the commercial version Astravan. But in The Netherlands, the Astra Sports Tourer was available as Astravan at special order.

Engines are available with the 5-speed or 6-speed manual transmission. The only optional available automatic transmission is the 6-speed with active select mode, which can be ordered for the 1.4 turbo, 1.6, 1.6 turbo and 2.0 CDTI depending on region. From 2011, Start/Stop was introduced in certain countries on some models, and from 2012 an overboost function was added to the 1.4 turbo. [Engines with (S/S) are in bold in CO2 column]. The engines are Family 0/Family 1/Ecotec/MGE (gasoline), and MultiJet/Circle L/GM MDE (diesel).

In June 2012, a facelift was announced. Visual changes occurred at the front and back of the hatchback and sports tourer, and a saloon was introduced to certain markets. Engine wise, the 2.0 BiTurbo CDTI 195 PS from the Insignia from autumn 2012 and a new 1.6 L 170 PS turbocharged SIDI Ecotec direct injection unit from the new MGE engine family is available from early 2013. 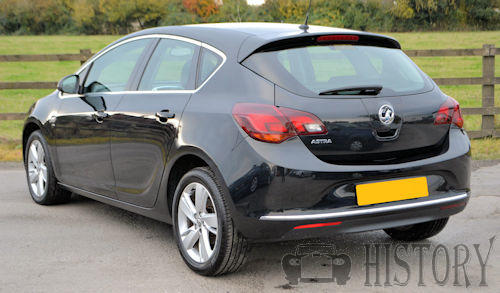