In April 1993, the Corsa B was unveiled, and in the United Kingdom, Vauxhall dropped the Nova name, with the car now being known as the Corsa. In May 1994, it was launched by Holden in Australia, as the Barina, replacing a version of the Suzuki Swift sold under that name. This proved a success, and was the first Spanish-built car to be sold in significant volumes in the Australian market.

Four-cylinder power came from 1.2, 1.4, and 1.6 litre Family 1 petrol engines, as well as an economical 1.5 L turbodiesel engine. Most cars received a five-speed manual transmission, although a four-speed automatic was also available with certain engines. In the first few years, a four-speed manual was also available coupled to the smallest 1.2-litre engine. Unlike the previous model, there was no saloon version, but one was designed in Brazil for the Latin American market, as saloons were much preferred to hatchbacks. This was also introduced in South Africa and India. An estate car, panel van and pickup truck were also introduced, and a convertible version was produced for the Australian market, called the Holden Barina Cabrio. The estate car version was sold in some European markets (including Italy), badged as an Opel. The Corsa also spawned a small coupé called Opel Tigra. 1.0 L 3-cylinder and 1.2 L 4-cylinder Family 0 economy version was launched in 1997, and a Lotus-tuned suspension was added as well as an exterior refresh. 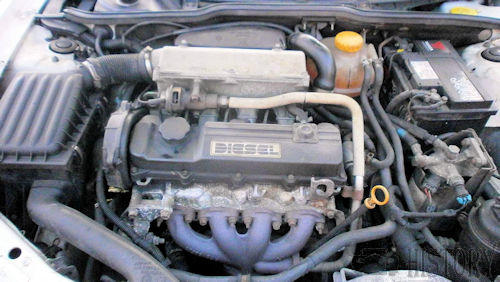 The saloon model was built and sold in Latin America as Chevrolet Corsa Classic until 2010. A budget version introduced for the Brazilian market, the Chevrolet Celta, has bodywork resembling the late 1990s Vectra and Astra. The Celta was sold in Argentina as the Suzuki Fun for a certain period. In 2011, GM stopped representing Suzuki in Argentina, so the Celta reverted to its original name under the Chevrolet brand. Argentinian production began in September 1997, where it was the first locally built Chevrolet passenger car since 1978. The Latin American Corsa received a light facelift in 1999, with smoother bumpers, and from April 2002 (when the new Corsa II was introduced) the Corsa B began being marketed as the "Corsa Classic" until 2010 where it became the "Classic" when the Corsa B-derived Chevrolet Sail and Chevrolet Celta replaced it.

The saloon and estate car versions were produced in China by Shanghai GM as Buick Sail and Buick Sail S-RV, respectively from June 2001 to February 2005. That year they received a facelift and became known as the Chevrolet Sail and SRV. In September 2006, Chile became the first country outside China to receive the Chinese-assembled Sail; it is called the Chevrolet Corsa Plus, available as a four-door saloon with a 1.6 L 92 PS (68 kW) engine. The Corsa Plus includes dual front airbags, anti-lock brakes, air conditioning, electric windows and central locking as standard equipment.

In India, the hatchback, saloon and estate car versions were sold as the Corsa Sail, Corsa (or Corsa Joy) and Corsa Swing respectively until the end of 2005. The hatchback model was still being produced, and extensively marketed in South Africa as the Corsa Lite under the Opel branding until 2009 at which point it was discontinued. 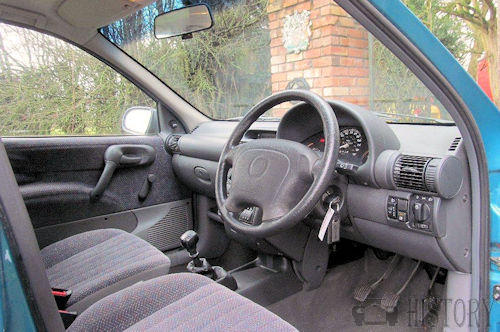 In Thailand, Corsa available as Opel and fuel injected 8V 1.4-liter engine and "Joy" and "Swing" variants, both available with 3 or 5-door and manual or automatic.

The Corsa was updated in 1997 resulting in different styling options and better safety features:

In 1994, General Motors de México first marketed the Corsa B as the Chevy, which would quickly replace Volkswagen's Sedán as the people's favourite. For 2004 (after the Corsa C was introduced in 2002), a Mexican designed and produced version of the hatchback and saloon,known as the Chevy C2, was released, which is also sold in Colombia. All Mexican previous versions were known as the Chevy, with the names Monza used on the saloon, and Swing (5-door) and Joy (3-door) for the hatchbacks. The latter 2004 and 2008 redesigns were simply named Chevy and Chevy Sedán. The Chevy was a favourite among taxicab drivers and one of the best-selling cars in the country. The Chevy ended production in late August 2011 at the Ramos Arizpe assembly plant. This move is because the Chevy's sales have been dropping constantly since early 2010 and also because it doesn't meet with the new safety requirement rule in Mexico that forces it to have standard front airbags. The 5-door hatchback was dropped after the 2010 model year, leaving only the 4-door saloon and the 3-door hatchback, this last one being the most popular model. The Chevy is now discontinued, with only a short run of 2012 models after almost 18 years on the market. The successor for the 3-door & saloon, the Chevrolet Sonic will be built in Ramos Arizpe starting 2012 instead, while GM suddenly replaced the 5-door Chevy with the Chevrolet Spark. 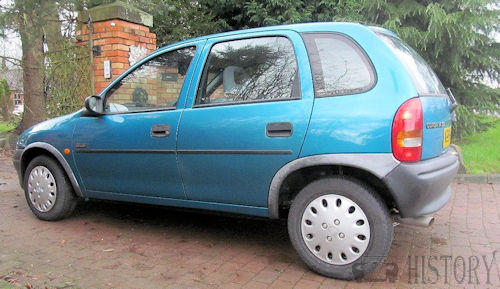