The Chevette was a supermini model of car manufactured by Vauxhall in the UK from 1975 to 1984. It was Vauxhall's version of the family of small "T-Cars" from Vauxhall's parent General Motors (GM); the family included the Opel Kadett in Germany, the Isuzu Gemini in Japan, the Holden Gemini in Australia, the Chevrolet Chevette in the United States, Canada and Brazil, the AYMESA Cóndor in Ecuador and a badge-engineered Pontiac Acadian/Pontiac T1000 across North America.

The Chevette was designed to fit into the Vauxhall range below the Viva, and was initially presented as a hatchback, a style that soared in popularity during the 1970s. The Chevette was the first British-built hatchback of this size,with Ford not responding with a similar product until the following year.

From 1975 until 1978, the Chevette was the UK's best selling hatchback as UK branded rivals failed to respond to the challenge of the imported Peugeot 104, Fiat 127 and Renault 5 until the arrival of Ford's Fiesta at the end of 1976. Chrysler UK did not launch its Chrysler Sunbeam for two years, while it was five years before British Leyland came up with the Austin Metro.

It was launched in the UK using Vauxhall's slogan and musical 'jingle': "It's whatever you want it to be! - A sporty coupe, a family saloon, a handy estate...". It was made at the purpose built factory in Ellesmere Port, Merseyside, under a government initiative to bring employment to the area.

The Viva remained on sale until the end of 1979, when the Opel Kadett D-based Vauxhall Astra was launched, while the Chevette remained on sale until 1984, itself being replaced by the slightly smaller Vauxhall Nova that was launched in 1983, with Chevette production being reduced in November 1981, when Astra production was moved to the Ellesmere Port factory - the first Astras had been imported from Opel's Bochum plant.

This longevity led to the Chevette being exported to Germany after 1979, following the discontinuation of the Kadett C; here the Chevette was an unusual small car in that it still featured rear wheel drive. In order to give German buyers the option of rear-wheel drive following the Kadett D's introduction a further 12,332 Chevettes were sold through Opel dealers in Germany with effect from October 1980, although they never actually carried Opel or Vauxhall branding - being badged simply as "Chevette". By this time, the Chevette was the only Vauxhall badged car to be sold in markets such as Mauritius and New Zealand: successor models assembled in the UK for sale in mainland Europe, such as the Astra, have been badged as Opels.

A van version, based on the estate and called the Bedford Chevanne was also built, and badged as part of GM's Bedford commercial vehicles marque.

Although the Chevette was largely a rebadged Opel Kadett C with revised front-end (detailed below), it did use the 1256 cc overhead valve (OHV) engine of the Viva instead of the Kadett's units, which were produced by Opel. The Kadett's double wishbone front suspension, rear-wheel drive and rear suspension with Panhard rod, torque tube and coil sprung live axle were carried over unaltered. Inside, the two cars differed only in terms of their dashboard and switchgear: the Chevette stuck to the British & Japanese right-hand drive tradition of having the indicator switch on the right-hand side of the steering column, while the Kadett had the mainland European left-hand drive custom of the flasher stalk being on the left. The Chevette also had a much more angular instrument binnacle, although the instrumentation within was similar (though in imperial rather than metric measurements).

The Chevette's front end featured a more aerodynamic-looking nose treatment than the Kadett, based loosely on the design of the "droopsnoot" Firenza. In contrast the Kadett had a more conventional flat-fronted design. In 1980, the Chevette underwent a facelift with flush fitting headlights, giving it a "family look" alongside the larger Vauxhall Cavalier. It also received new wheel designs, revised C-pillar vent covers and revamped interior trim with re-designed front seats to increase rear knee room marginally. However, it was effectively the beginning of a phase-out in favour of the newer Astra, Vauxhall's version of the front wheel drive Kadett, which was launched in January 1980.

Production finally finished in January 1984, approximately one year after the launch of the Spanish-built Nova. 415,000 Chevettes were sold in Britain. 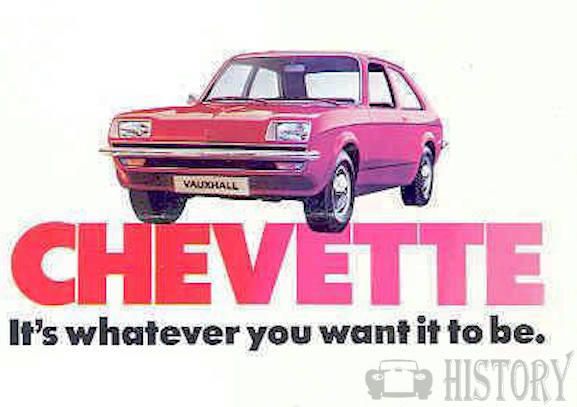 The Chevette was also sold in Austria, where it was also offered with the option of a low output version of the 1256 engine (49.5 bhp). The range included 2 & 4 door L saloon and Estate, GL 3 door Hatch, GLS 4 door saloon and 3 door Hatch.

The local factory AYMESA produced a version of the Chevette starting in 1978. This version was called AYMESA Cóndor. It had a glass fiber body and a 1500 cc engine.

On 6 December 1979 Vauxhall announced that they were pulling out of 11 major European countries where Vauxhall cars were sold alongside Opels. This was to be completed by the end of 1981.

However within weeks of this being announced Vauxhall said they would be exporting Chevettes to Germany. At the time Opel had already started selling the Kadett D/Astra Mk1, but as it was felt that there was still a market for the previous rwd model the Chevette was sold through Opel dealers with a 1,256 cc 53 bhp N and a 57 bhp S Automatic. The only Vauxhall badging was the hub caps and steering wheel.

Although the Chevette was generally a European car, it was also assembled in New Zealand between 1976 and 1981. All bodystyles that were available in the UK were sold. The first models built were three-door hatchbacks.

It was notable that New Zealand had the Chevette as well as the Isuzu Gemini, as neighbouring Australia had only the Isuzu Gemini-based Holden Gemini. The Vauxhall 1.3L (from the Viva and Magnum) was the standard engine unit for all Chevette models.

Most models were of "GL" specification and all had metric instrumentation. A lower-level trim Chevanne commercial fleet model was also offered, however unlike the European models it used the estate's bodyshell - complete with side windows - and was badged as a Vauxhall.

In 1979 the New Zealand Chevette had a mechanical update unseen on the European models, when it gained Holden-developed Radial Tuned Suspension. This resulted in the entire Chevette range being re-suspended on wider tyres, and tuned suspension, giving the car superior handling over its rivals.

At the beginning of 1980 the Chevette received a facelift, which included flush mounted headlamps, and various new interior appointments, including extra air vents and different seats, giving more legroom to the cars.

An additional base "E" model was introduced to the range in 1980, aimed at fleets and budget-minded buyers, using the four-door bodyshell. This car was incredibly spartan – fitted with plain wheels and vinyl seats – and lacked many necessities, including reversing lamps, hazard flashers, radio and many gauges.

Production of the New Zealand Chevette ceased in June 1981, when it was replaced by the Holden Gemini, which for the New Zealand market had initially been sold as an Isuzu in the mid-1970s and then been dropped before making an early-80s comeback. The Chevette was the last British-sourced GM product to be assembled in New Zealand.

In Uruguay, the Viva-based "Grumett" had been marketed since 1962. This was a 2+2 coupé utility based on the Viva HC, with imported metal doors and locally made fiberglass front and rear ends. A similarly constituted copy of the Vauxhall Chevette was created to replace the original Grumett. However, this featured the 1.4 litre engine and mechanical underpinnings of the Brazilian Chevrolet Chevette. This was then succeeded by a version which featured the Brazilian-style bodywork, although this time it was also available as a station wagon. 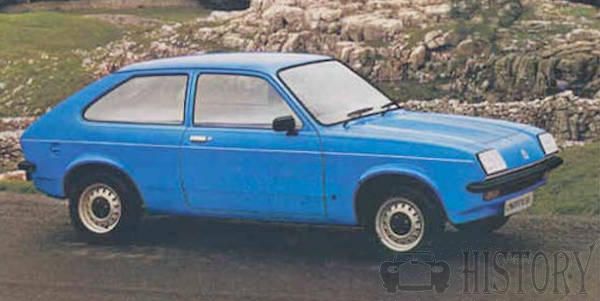 They created a far more powerful Chevette variant by fitting the much larger 2.3 litre Slant Four engine into the shell, using a sixteen valve cylinder head which Vauxhall was developing. Suspension and rear axle were from the Opel Kadett C GT/E, while the gearbox was a Getrag 5-speed. Chevrolet Vega Alloy wheels (similar in appearance to the Avon wheels used on the droopsnoot Firenza) were used, as well as a newly developed glass-reinforced plastic air dam.

The resulting car was extremely fast, with 135 hp (100 kW), and a far cry from the small-engined Chevettes from which it was developed. In order to compete in international rallying, the car had to be homologated; for Group 4, the class the HS was to compete in, this meant building 400 production examples. The result was an incredibly fast and well handling, if rather unrefined, road car. Like the Droopsnoot Firenza, the HS was available only in silver, with red highlighting and a bright red, black and tartan interior; though (partly to help sell unsold vehicles) some cars were repainted black, such the Mamos Garage HS-X.

The HS was a great success as a rally car, clocking up notable wins for drivers such as Pentti Airikkala and Tony Pond. It was a challenge to the most successful rally car of the time, the Ford Escort, winning the British Open Rally Championship for Drivers in 1979 and for manufacturers in 1981.

To keep the rally car competitive into the 1980s an evolution version, the Chevette HSR, was developed which held its own for several more years. Evolution in Group 4 demanded a production run of 50 cars incorporating the new modifications; these were made by rebuilding unsold HSs and by modifying customers' vehicles. However, the merger of the Vauxhall and Opel marketing departments had already resulted in Dealer Team Vauxhall and Dealer Opel Team (DOT) joining to form GM Dealer Sport (GMDS); with the Chevette soon to be obsolete, Opel were able to force the cancellation of the HSR rally programme in favour of the Manta 400.

This was a Special Edition Chevette made by Star Custom Vehicles, Station Road, Ampthill. They came with Black and Silver Paint, a plaque inside the door stating styles by Farina, sports steering wheel, flared arches and low profile wheels. Blackwatch was written on the nose of the car and on the bottom of each door.

Also produced by Star Custom Vehicles, Station Road, Ampthill. Features Black, Silver and Orchid livery. Color impregnated Front Air Dam. Flexi Rear spoiler. Alloy wheels with locking option. Head restraints. Black four spoke Sports Steering Wheel. Centre console. These features in addition to the Chevette L Hatch Specification. Burr walnut fascia, hinged glove box and door capping. Removable glass tinted sun hatch. 2 wave band radio/stereo cassette player with door speakers. Lock wheel centers. Does anyone one have any more information on this model, are there any left on the road? Do you own one? If so do you have a picture we can use on the site?

Both the above special editions were created by Rob Darcus of Star Custom vehicles. Rob started to create specials to shift more metal when he was District Manager for Vauxhall in London. He got Hamilton Motors involved and they set up a facility in Ampthill called Star Custom Cars. They did fancy paint jobs on various Chevette dealer specials (that is they were ordered by Rob's dealers in London and not available else where). He eventually got the call from Luton where he did the same sort of thing national. Sadly Rob died some years ago.

This 1977 special edition was produced in Silver to commemorate the Queens Silver Jubilee in 1977. 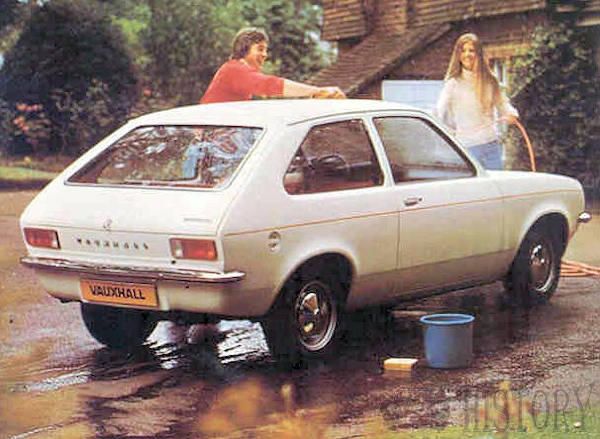