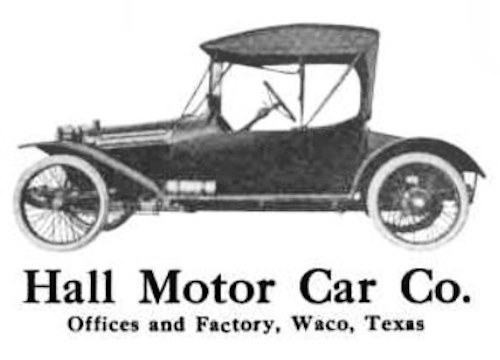 Hall Motor Car Company , previously Hall Cyclecar Manufacturing Company , was an American manufacturer of automobiles in the 1910s. The brand name was Hall .

Lawrence Hall co-owned the Hall Cycle & Plating Company in Waco, Texas, with John B. Fisher. In 1914, he designed and carefully tested a small automobile. In the same location, he established the Hall Cyclecar Manufacturing Company and began making autos. The Hall Motor Car Company was renamed in 1915. The manufacture ceased in the same year.

Hall Light Cars are built in four different models to meet all requirements, The roadster for general use the speedster for sports-men and young fellows with a leaning towards speed—the coupe as an ideal all-weather car for ladies—the commercial delivery for general commercial use the year round.

The prototype was called Cyclecar , although he did not meet the criteria. The two-cylinder engine came from the Spacke Machine & Tool Company . 88.9 mm bore and 93.218 mm stroke gave 1157 cc displacement . The engine power of 9 hp was transmitted via a two-speed gearbox and belt to the rear axle. The chassis had 254 cm wheelbase and 91 cm gauge . The open body offered space for two people in a row.

The standard version had a four-cylinder engine from Perkins . This had 69.85 mm bore, 101.6 mm stroke and 1557 cc. The engine power was specified depending on the source with 12 hp or 18 hp. The wheelbase was maintained while the track width was widened. The seats were now arranged side by side. In addition to Roadster , Speedster and Coupe , a light delivery van is also handed down.

There were no connections to Hall Motor Vehicle Company and Hall Manufacturing Company , which also offered vehicles as a hall.