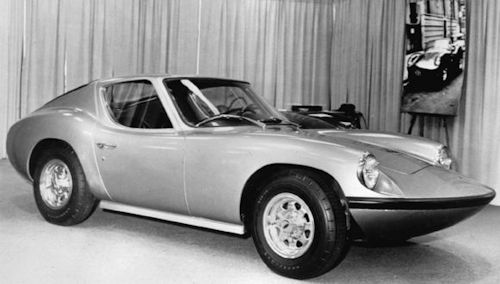 Devin Enterprises was an American automaker, which was 1955 to 1964 based in El Monte (California) . Founder was Bill Devin. Devin was mainly known for its elegant fiberglass bodywork, but also offered complete automobiles.

Bill Devin was born in 1915 in Rocky, Oklahoma, USA. Bill Devin started building cars early in his life. He was also a very well known and successful racer.

In 1954, Bill Devin decided that he could build cars at least as well as anyone, especially the Europeans. He converted a chicken coop into a workshop and began constructing the legendary Devin Panhards. He worked with polyester bodies, which in the early 1950s was still very innovative and a development of NASA. Devin learned the art of making polyester bodies very fast. He used this novel material specifically to reduce the weight of his racing sports car.

Another milestone was the further developed Panhard engine, which was equipped with a belt-driven overhead camshaft. Devin forgot to patent this idea, since paperwork was an abomination to him.

The next chapter in Bill Devin's life is probably the best known. The attractive and in several variations individually available Devin bodies were based on the design of the Ferrari 750 Monza, respectively the Erminis. With these bodies, a variety of chassis could be equipped, from the small Crosley, on the Triumph TR2 / 3 to powered by a Cadillac engine Allard. Devin quickly became the largest and most successful producer of these bodies. With his dealer network he delivered these bodies to Europe, North, Central and South America and even to South Africa.

Devin's competitors in the US back then were companies like Byers, Almquist, Alken, La Dawri, Microbond, Fiberfab, Fibersport, Atlas, Kellison, Alied, Conquest, Victress and Microplas, most of which have long been forgotten. The name Devin, however, held and he stood for top quality at reasonable cost. Devin bodies were always very smooth and the finishing was better than competing products.

Bill Devin built on the basis of the success of the bodies also complete cars with its own lattice frame. The Devin C based on the Chevrolet Corvair and the Devin D based on the Porsche 356 or VW Beetle. With the Devin SS Devin realized his dream to build fast, powerful complete vehicles. The Devin SS became a famous and successful circuit on many racetracks, but the financial success remained.

1955 was presented as the first model of the SS (Super Sport). Its chassis with 2337 mm wheelbase came from Ireland . Then a two-seater roadster body was mounted. The top -mounted V8 engine of the Chevrolet Corvette with 4638 cc developed 220 bhp (162 kW) power and provided for an acceleration of 0-100 km / h in 4.8 seconds and a top speed of 225 km / h. The engine power was transmitted via manual four-speed gearbox from Borg-Warner to the rear wheels. Due to the high selling price of US $ 5950, - only 15 copies could be sold until 1958.

Devin modified a Panhard Dyna Z with its 851cc two-cylinder boxer engine by installing modified cylinder heads from the Norton Manx . The two overhead camshaftswere driven by toothed belts  . The race car in 1956 won the championship of the Sports Car Club of America (SCCA) .

1959 Devin tried with the much smaller model D . The wheelbase of the Volkswagen chassis was 2,083 mm, and the rear was fitted with air-cooled four-cylinder boxer engines from Volkswagen or Porsche . The VW engine had 1191 cc capacity and made 36 bhp (26.5 kW) at 3700 min , the Porsche engine was waiting with 1586 cc displacement and gave 70 bhp (51 kW) at 4500 min  from. The sales price of the version with VW engine was US $ 2950. The production figures up to the model setting should amount to 46.

In 1961, Devin fitted the chassis and body of the Model D with the six-cylinder boxer engine from the Chevrolet Corvair . This engine was air-cooled and drew from 2376 cc displacement of an output of 80 bhp (59 kW) at 4400 min . The result was called Model C . It was built until 1964; The production figures are not known in this case either.