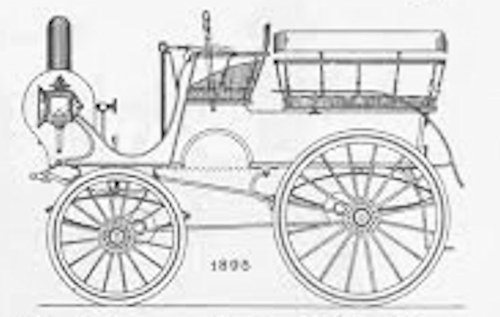 The automobile manufacturing business was contacted by Charles F. Caffrey Carriage Co. through the Morris & Salom Electric Company; this company produced with the Electrobat the first really usable electric car of the USA. Caffrey built from 1894 to 1897 the bodies of these vehicles.

In 1895 Caffrey built a single steam car to physician Dr. FL Sweaney from Pennsylvania. The vehicle had four small steam engines of 3 hp each, which each drove a wheel. Each could be controlled separately with a lever, so that between 3 and 12 hp were available; The Caffrey Steam could therefore also be driven with front or four-wheel drive.

The car was a typical High wheeler with iron-milled wooden spoke wheels. Caffrey Steam offered some innovative technical solutions. The high-quality leather boiler was heated with kerosene. This was located in the bow transverse to the direction of travel. Fuel and water tanks were invisibly installed below. The open structure with room for six people. The steam car had elliptic - leaf springs all around and large, was slowed by means of the pedal, which at the same time the fire for upon actuation of the burner extinguished.

In 1897, the CF Caffrey Carriage Company produced a number of electric taxis for the Electric Carriage & Wagon Company. The design came from Pedro Salom and Henry Morris. For the model year 1917 Caffrey supplied the factory bodies for the short-lived Biddle, a sporty luxury car, which was built in 1915-1922 in Philadelphia.