Brogan (B & B Specialty Company) 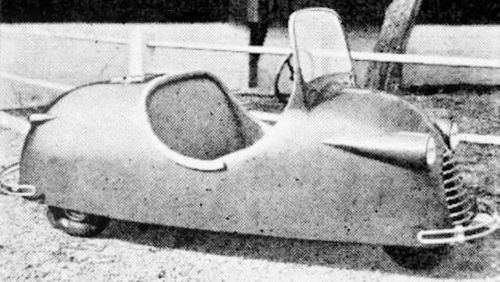 Brogan was an American automobile brand that was built from 1946 to 1951 by the B & B Specialty Company in Rossmoyne , Ohio .

The first Brogans was built in after the second world war from 1946 to 1948. It was a tiny, two- seated three-wheeled roadster (a single wheel in front) that resembled a bumper car. It was powered by a front-mounted Onan air-cooled two-cylinder engine developing 10 bhp (7.4 kW) of power. The wheelbase was 1524 mm. The selling price was US $ 600.

In 1948, the Brogan Package Car was added, with which loads could be transported.In 1949, the first Brogan was replaced by the Broganette . The offered four passengers space and had a single rear wheel. The engine was the same.