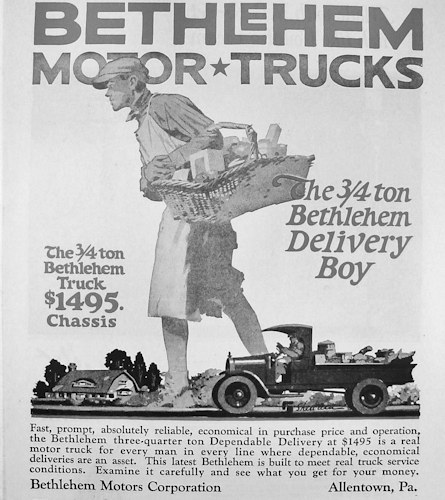 The Bethlehem Motor Truck Company was an American commercial vehicles from 1917 to 1927.

The first commercial vehicles of Bethlehem Motors Corporation were introduced in 1917 by the Bethlehem Motor Truck Company of Allentown, Pennsylvania. These Model 1 and 2 light trucks have cardan drive and bought-in motors. The cost of a chassis ranged between US $ 1245 and US $ 1775. In 1920, the Ideal brand also produced a passenger car. The company was taken over by the competitor Hahn Motor Truck Company in 1927, and it continued to function after that.

At the end of this year, the US entered the First World War. Bethlehem joined the government's Liberty Truck program. This meant to recreate a military truck to exact specifications. Fifteen commercial vehicle manufacturers and dozens of suppliers ensured that the virtually non-motorized US armed forces were getting a standard truck in no time, and logistics were much easier for the army. The Liberty was finally launched in four version with 0.75 to 5 tons payload, the three-ton Liberty Standard B was by far the most widely used. It is likely that also Bethlehem made this model. In any case, the number of units produced here should have been around a few hundred. Most Liberty trucks built the Peerless Motor Company.

Like all US truck manufacturers, Bethlehem faced a completely different market after the war. The market was flooded with well-maintained commercial vehicles from army surplus in the common classes of 3 to 5 tons payload. As a result, demand for new vehicles in both the US and export collapsed, leading to a first concentration in the industry. Many small, often only regionally active commercial vehicle manufacturers (like Bethlehem one was merged, were taken over or gave up. But Bethlehem continued to expand. Starting from 1918 also a tractor type 18-36 with four-cylinder engine of Beaver was manufactured, which was delivered for price reasons without fenders.

In 1919, Bethlehem's annual output was already 3,500 vehicles; available were chassis with 1½ tn, 2½ tn, and 3½ tn payload to US $ 1865.-, $3465 The ambitious planning for 1920 envisaged an annual production of 20,000 units.  In addition, they bought the North American Motors Company in Pottstown (Pennsylvania) one of its suppliers. Thus, the company now had two plants, had four truck series from 1 to 4 tons in the program and also introduced a new coach.

The difficult market situation may have been the reason that Bethlehem developed despite a strained finances a car only for export. The vehicle, available exclusively as a four-seat "sporting type", received an in-house 40 bhp four-cylinder engine - probably from the North American- acquired production - and a Timken type rear axle.