Automotive manufacturer of New York.United States from 1953 to 1955.

Studillac was an American automobile brand from the 1950s.

Bill Frick Motors at Rockville Center (New York) built passenger cars under this name from 1953 to 1955.

As the name suggests, it was in the single model of the brand to a Studebaker Commander Starliner, a two-door hardtop coupe with five seats in which a Cadillac Motor was installed. The wheelbase was 3060 mm, the total length 5129 mm, the weight 1495 kg. The top -mounted V8 engine had 5426 cc displacement and gave its power via a manual three-speed transmission to the rear wheels on. On request, there was a two-stage Hydra-Matic .

The Studillac has several appearances in Ian Fleming's James Bond novels, such as in "Live and let die" and in Goldfinger by CIA agent Felix Leiter, who is a friend of Bond. 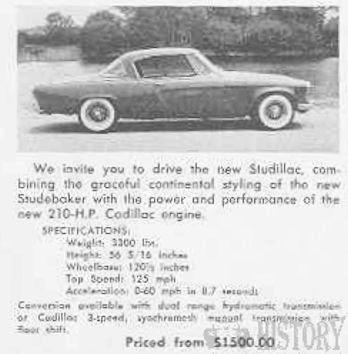