Automotive manufacturer of Dayton, Ohio,United States from 1905 to 1913. 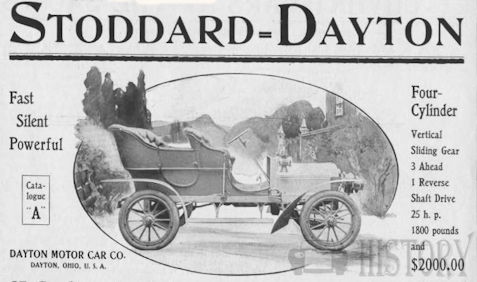 The Stoddard-Dayton was an automobile built by the Dayton Motor Car Company in Dayton, Ohio, from 1905 to 1913. John W. Stoddard and his son Charles G. Stoddard were the founders of the company.

In 1904, John Stoddard decided to leave the agricultural equipment industry where he had made his fortune and instead build high-quality automobiles for the emerging market in the US. He sent his son Charles to Europe to visit local automakers. Charles came back with the conviction that steam and electric drive for automobiles were already outdated. The first automobiles had engines from Rutenber four-cylinder with 4605 cc capacity. The first six-cylinder engines appeared in 1907. The last model series consisted of three four-cylinder models and a six-cylinder model with Knight engine .

The company has always built cars of the highest quality with powerful engines. Henry J. Edwards (born about 1872 in England) was designer and chief engineer of the company. The simpler models were painted in 15-18 layers, with each layer sanded by hand. The Pullman limousines had 27-28 layers created in the same way. After completion, each car was driven 240-640 km on public roads, then the engine disassembled, the cylinders honed, the valves re-ground, everything reassembled and tested again on the road.

The first cars were delivered in late 1905 as 1906 models. A 1906 advertisement proclaimed, "The new Stoddard-Dayton Model D Touring has SPEED and SYMMETRY in every axis ... They can throw their troubles far and scatter them miles behind the seat of a real automobile. t expensive kind of economy. It is the RIGHT car for you and there is the right WARRANTY to it, which gives you fulfillment and protection. Ready to ship. "The Stoddard earned a reputation as a winner in car racing, sprint racing, hillclimb races and rallies throughout the Midwestern United States. Since these cars were all out of production, Dayton Motor Car immediately shared these victories with the auto-interested public. In 1909, a Stoddard-Dayton won the first race at the Indianapolis Motor Speedway with an average speed of 92.2 km / h. The first safety car in the world was a Stoddard Dayton with Carl Graham Fisher behind the wheel, who started the Indianapolis 500 in 1911 .

In 1909, Stoddard-Dayton founded the Courier Car Co. in Dayton for the production of a smaller, lighter and cheaper version of the Stoddard Dayton. The new car was called Courier .

The remains of the Dayton Motor Car Company were taken over by the reorganized Maxwell Motor Company . There, parts were made for assembly in New Castle (Indiana) and later in Detroit (Michigan) . In 1913 Maxwell again offered the Stoddard Dayton models 30, 38 and 48 (Savoy, Stratford and Saybrook). Possibly, however, these were also left over from the previous year copies. The model 48 of 1913 had a starter and electric lighting, which had to be paid for $ 200 extra. Later, Maxwell himself became part of Chrysler and the factory in Dayton became Chrysler AirTemp .

Stoddard-Dayton was slow to respond to the needs of the mass market and adhered to a high-quality strategy, even after automobiles were no longer just the status symbols of the rich. The company built the best possible cars, while Ford and General Motors built the cheapest possible. Stoddard-Dayton extended its model range to all price ranges, but never changed the basic production methods. The classic example of this was the Pullman sedan's 11-piece radiator cap: two pins, gasket, seal retainer, bolts and opener. It was firmly connected to the radiator so it could not be lost or stolen and could be opened with just one turn of the opener, even when the engine was hot.