Automotive manufacturer of Freeport, Illinois.United States from 1915 to 1924. 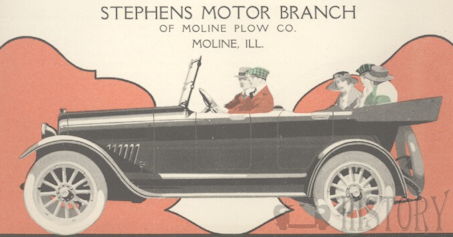 The Stephens Motor Car Company was an American automobile manufacturers , which from 1922 to 1924 the production of the 1916 Moline Plow Company introduced Stephens continued -Automobils. The company was controlled by John North Willys since 1918 , but did not integrate it into its Willys-Overland group. The cars of this brand belong to the then upper class , had temporarily at prices of the upper middle classsold. At times, the company was controlled by John North Willys, but did not actively participate in the management. The brand name was Stephens ; to other manufacturers of automobiles of the same name as the British Stephens (1898) and the US Stephens - Cyclecar there is no known connection.

The Moline Plow Company was established in 1870  from the Candee & Swan Implement Company in Moline ( skirt Iceland County , Illinois ). The company specialized in the production of plowshares and other equipment for agriculture and gained a good reputation. A second mainstay was horse buggies . 1882, the Vice President of the Company, George W. Stephens , acquired the majority stake in the company. Under his leadership, the company developed into a major regional player and grew through the acquisition of smaller rivals. In 1915, the first engine plow was built. In the same year, a tractor manufacturer was taken over with Universal Tractors . As Moline Universal he was built until 1923. Also at this time began the development of a middle-class car with which the operation should be better utilized.

The automobile industry was modest and, above all, the need to diversify production and thereby offset a decline in agricultural machinery production. This was also openly communicated to the outside world.  This was the end of 1915, the subsidiary Stephens Motor Branch set up; whose managing director was Matthew A. Steele , who had already gained experience in the construction of carriages. He organized premises, machinery and equipment for production. The team also included chief engineer John T. Trumble , who had held that position with two automakers based in Flint, MichiganMonroe Motor Companyand the Chevrolet Motor Company (which was not yet part of General Motors at the time). The workforce was completed by chief designer John A. Holden and stenographer Mrs. Tice . For the design of the automobile experienced engineer drew Edward T. Birdsall responsible. He was a founding member and first secretary of the Society of Automotive Engineers (SAE) and responsible for a number of designs for various manufacturers. Most recently, he had worked for patent attorney George Baldwin Selden , the automobile companySelden Motor Vehicle Company in Rochester (New York) , is developing a four-cylinder cars. 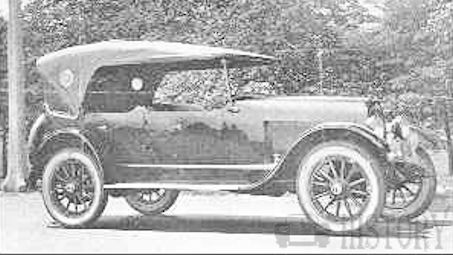 In February 1916, Stephens received two bogies manufactured at a specialist Detroit facility to Birdsall's specifications for testing. One of them was possibly equipped with a four-cylinder engine  however, such a version did not go into production. In March 1916, the company moved to Freeport (Illinois) where Moline Plow the former facilities of the carriages - and wagon manufacturer John W. Henney & Co. took over.The plants were also suitable for the construction of bodies, which Stephens made himself. Not proven but it is likely that Stephens also carved foreign vehicles. It seems that many of the former Henney employees moved to Stephens, including the office manager Preston A. Boyd (1892-1959); this went back to Henney after the closure of Stephens, where he became vice president and sales manager.

Production started in 1916 for the model year 1917. The only model was initially the Stephens Six Series 60 with a six-cylinder engine Continental Model 7W . This was initially only available as a touring . At the turn of the year 1916/1917 followed a variant as a roadster . Both cost only US $ 1150, although their bodies were crafted by hand. priced in the middle class settled, this was a very attractive offer, but the low prices were not sustainable in the long run. An externally little changed successor appeared in August 1917 as Salient Six Series 70th, The new model was slightly longer and had an overhead valve six-cylinder of R & V . The Roadster and the first closed Stephans, a 5-seater Sedan , were offered only in the model year 1918; however, both appeared again in 1920 in the series 80. Instead, there was a 1919 four - seat Touring with sophisticated equipment as a precursor to the attractive Foursome - Phaeton . The price for a 5-seat touring in basic equipment rose to US $ 1485.

John Willys of Willys-Overland took over 51% of the parent company in September 1918 Moline Plow and thus controlled the Stephens Motor Branch . As president and general manager for Moline Plow , Frank G. Allen  followed George Peek . Willys did not integrate the company into its Willys Overland group. At Moline Plow , some 80% of senior executives retained their positions and Stephens Automobile Branch's leadership changed little.

The Salient Six belonged in terms of performance in the then upper middle class and was there an attractive offer. The vehicle remained technically almost unchanged throughout its production time; the most significant adaptation after the change of ownership was the expansion of the body offer on three Touring with 4, 5 or 6 seats and a four-seater Victoria , which meant a Touring with better weather protection. The Moline Plow Company bought in 1920 with Root & Vandervoort their by far most important engine supplier. This company had recently generated up to 80% of its revenue from Moline Plow orders.

The models for 1921 were again raised: US $ 2400.for the open versions and US 3400 .for the now 6-seater sedan. The coupe accounted for. It is not possible to identify whether behind it a marketing concept or whether management acted under sheer cost pressures, but the attempt, the vehicle only on price increases in the upper class to establish, suggested clearly fail. Optical distinguishing feature from 1921 is a new, square logo on the radiator grille. It shows in the upper part the letter "S" as stylized lightning and below the lettering Stephens, 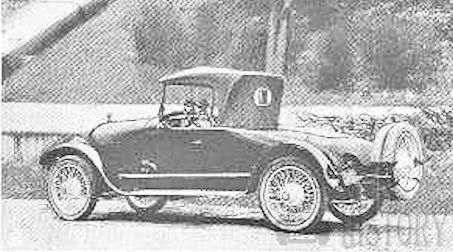 The Stephens Salient Six Series 90 for the model year 1922 was hardly changed technically. In his last year of production, however, he received most body styles. The prices were cut drastically and there were some models sportier variants with treads instead of continuous running boards and optional wire spoke wheels or stylish full-size wheels. The thus created Foursome - Phaeton and Roadster are considered the most attractive Stephens .

The water-cooled six - cylinder engine was initially purchased by Continental . It was a conventional, side-mounted in- line type 7-W engine . , as also used by Abbott  Anderson , Columbia , Davis . The 7-W has 224.0 ci (3670 cc) displacement of 3¼ inch bore and 4½ inch stroke . This engine produced 55 bhp (41 kW) at 2400 rpm. and was used until July 1917. Stephens then switched to a more advanced engine. Because the Root & Vandervoort Engineering Company (R & V) already supplied most of the engines for the agricultural equipment of the Moline Plow Company , this experienced engine builder was also a natural choice for Stephens. In 1920, Moline Plow took over . 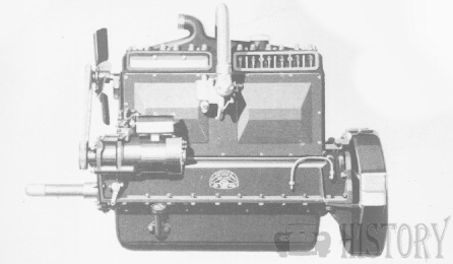 The R & V six-cylinder was top-mounted and had the same dimensions as the Continental 7-W . this too had a triple crankshaft .The output is 57 bhp @ 2600 from the factory and 59 bhp @ 2750 rpm from 1922.  1920 Stephens changed the performance of his vehicles. This resulted in a nominal correction of 25.35 hp according to NACC to a more realistic 57 hp.

The three-speed gearbox with reverse gear Stephens made to their own plans. As a special feature, a ball-bearing output shaft was mentioned. The 10 "diameter dry disc clutch was purchased from Borg & Beck .

The Six's 115-inch wheelbase proved too short to be accepted by the market. Thereafter, the length of Stephens grew with each series; even the smallest, Six Series 10 , stayed above this mark. This results in a parallel to the much better known Packard Single Six , which also sold satisfactorily only after the introduction of a longer wheelbase.

The extensive basic equipment included a hall - central chassis lubrication , a Stewart - speedometer to 75 mph (120 km / h), an electric horn, air intakes in front of the windshield, a gear lock as anti - theft device , a Boyce - Motometer and a Kellogg tire pump.

The chassis consisted of a conventional ladder frame with five trusses and one torsion tube front and rear, d. H. Trusses in the form of round rods at the end of the chassis. There were time-typical rigid axles front and rear, which hung on leaf springs. 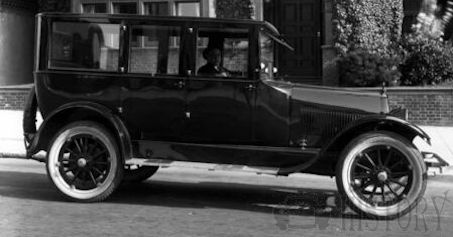