Pierre Cardin Automotive was an American automobile manufacturer from 1980 in a high-priced luxury coupe called Evolution I offered. The company took the name of the French fashion designer Pierre Cardin , who was awarded the authorship of the design of the body of this vehicle. Evolution I  that was based on a well-known high-volume model and had an alienated body and an exclusive interior. By 1981, only a few dozen copies were produced, which were sold until 1982.

In the 1970s, it was a common practice, especially in the American automotive market, to upgrade high-volume vehicles with specially designed equipment variants. Some manufacturers linked these special versions with the names of well-known designers, who should also give exclusivity. AMC introduced this concept in 1971 with the Hornet "Gucci" a few years later it took over Lincoln for the expensive models of the Mark Series .

Pierre Cardin also participated in these upgrades. One of the vehicles refined with his name was the AMC Javelin "Pierre Cardin" (1971-1973) or - far more exclusive - the Sbarro Stash Cardin made in Switzerland in 1976. Three years later, finally, the American luxury brand Cadillac offered a factory "Pierre Cardin Edition "of the DeVille / Fleetwood range .

With the company Pierre Cardin Automotive founded in 1980, the French fashion designer went one step further: his name now became part of the name of an automobile manufacturer. Whether Cardin himself was involved in the company is unclear. Pierre Cardin Automotive was based in the World Trade Center in New York. It sold the Cardin Evolution I. The very expensive vehicles were difficult to sell. In 1984, the company ceased its activities. There was no successor model.

The basis of the Evolution I was the Cadillac Eldorado Coupé 6th generation. Chassis, drive technology and passenger cell were taken over unchanged from the original vehicle, as well as the glazing and the essential sheet metal parts to the fenders. The design of the front and the rear and the interior was on the other hand independent. It was attributed to Pierre Cardin. Whether Cardin was actually responsible for the design, however, is doubtful.

Particularly striking was the revised front end of the Evolution I. Instead of the conventional stem Cardin Automotive added a self-designed, more than 50 inches long unit, which continued the line of the standard fenders slightly sloping. As a result, the front overhang of the car grew considerably. Over the entire width of the front of the car was a radiator grille made of horizontal chrome struts; the headlights were hidden behind flaps that continued the design of the grill. Overall, the front of the Evolution I should have used less chrome than that of the standard Cadillac Eldorado. The front bumpers were from the Oldsmobile Toronado which was based on the same platform as the Eldorado and had almost identical dimensions. 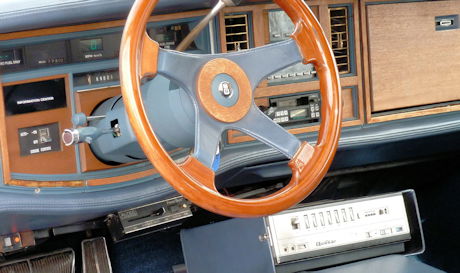 The interior has been significantly upgraded. Although the Evolution I took over the instrument carrier of the Cadillac Eldorado. Unlike in his case, the dashboard, however, was covered with high-quality real wood. The seats were upholstered in English leather. A stereo system, a Sony TV with VCR and a housed between the back seats refrigerated minibar could be delivered; the latter was equipped with crystal glass.  The paint consisted of 30 layers were applied by hand.

The rear end of the Evolution I was redesigned. Instead of the narrow vertical tail lights of the Evolution I wore a narrow light strip, which reached above the license plate over the entire width of the car. New were finally the rearview mirrors, which were in a conspicuous, aerodynamically encased housing. Some but not all copies of the Evolution I used the door handles of the Oldsmobile Toronado.

The production scope of the Evolution I is not clear. Pierre Cardin Automotive initially planned to produce a series of 300 vehicles. However, it is generally doubted that such a volume of production was actually achieved. A assumed 100 vehicles were manufactured..At least one vehicle was subsequently converted into a cabriolet.