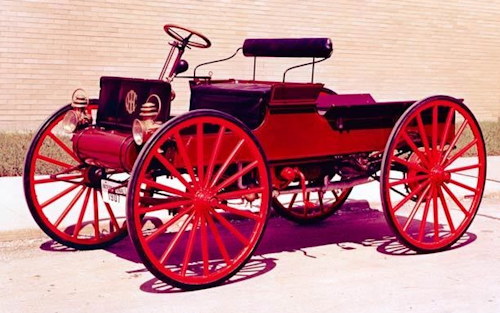 The International Harvester Company was a United States manufacturer of agricultural machinery, construction equipment, trucks, and household and commercial products.

The roots of International Harvester run to the 1830s, when Cyrus Hall McCormick, an inventor from Virginia, finalized his version of a horse-drawn reaper, which he field-demonstrated throughout 1831, and for which he received a patent in 1834. Together with his brother Leander J. McCormick (1819–1900), McCormick moved to Chicago in 1847 and started the McCormick Harvesting Machine Company.  In 1902, the McCormick Harvesting Machine Company and Deering Harvester Company, along with three smaller agricultural equipment firms (Milwaukee Harvesting Machine Co., Plano Manufacturing Co., and Warder, Bushnell, and Gessner—manufacturers of Champion brand) merged to create the International Harvester Company. Banker J.P. Morgan provided the financing. In 1919, the Perlin and Orndorff factory in Canton, Illinois, was a leader in the plow manufacturing industry. International Harvester purchased the factory, calling it the Canton Works; it continued production for many decades.

In 1926, IH's Farmall Works began production in a new plant in Rock Island, Illinois, built solely to produce the new Farmall tractor. By 1930, the 100,000th Farmall was produced. IH next set their sights on introducing a true 'general-purpose' tractor designed to satisfy the needs of the average US family farmer. The resulting 'letter' series of Raymond Loewy-designed Farmall tractors in 1939 proved a huge success, and IH enjoyed a sales lead in tractors and related equipment that continued through much of the 1940s and 1950s, despite stiff competition from Ford, John Deere, and other tractor manufacturers.

IH ranked 33rd among United States corporations in the value of World War II production contracts. In 1946 IH acquired a defines plant in Louisville, Kentucky, which was enlarged, expanded, and re-equipped for production of the Farmall A, B, and the new 340 tractors. Then in 1948, IH acquired the Metropolitan Body Company of Bridgeport, Connecticut. This was the manufacturing facility for the bodies of the commercially successful Metro line of forward control vans and trucks from 1938 until roughly 1964. 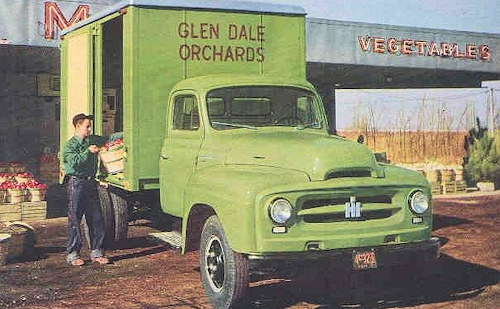 In 1974, the five-millionth IHC tractor was produced at the Rock Island Farmall plant.

Throughout the 1960s and 1970s, despite good sales, IH's profit margins remained slim. The continual addition of unrelated business lines created a somewhat unwieldy corporate organization, and the company found it difficult to focus on a primary business, be it agricultural equipment, construction equipment, or truck production. An overly conservative management, combined with a rigid policy of in-house promotions, tended to stifle new management strategies, as well as technical innovation. Products with increasingly ancient technology continued in production despite their marginal addition to sales. Worse, IH not only faced a threat of strong competition in each of its main businesses, but also had to contend with increased production costs, primarily due to labour and government-imposed environmental and safety regulations.

In 1979, IH named a new CEO, who was determined to improve profit margins and drastically cut ballooning costs. Unprofitable model lines were terminated, and factory production curtailed. By the end of the year, IH profits were at their highest in 10 years, but cash reserves were still too low. Union members became increasingly irate over production cutbacks and other cost-cutting measures. In the spring and summer of 1979, IH began short-term planning for a strike that seemed inevitable. Then on November 1, IH announced figures showing that president and chairman Archie McCardell received a $1.8 million (in 1979 values) bonus. McCardell sought overtime, work rule, and other changes from the United Auto Workers, which led to a strike on November 2, 1979. 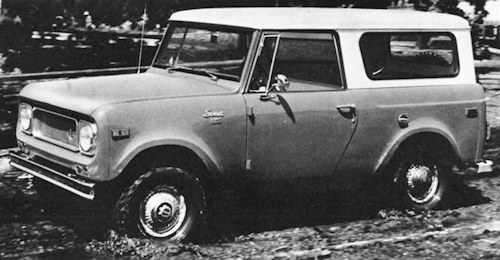 By 1981, the company's finances were at their lowest point ever. The strike, accompanied by the economy and internal corporate problems, had placed IH in a hole that had only a slim way out. Things only got worse until 1984, when the bitter end came.

IH is often remembered as a maker of relatively successful and innovative "light" lines of vehicles, competing directly against the Big Three. The most common were Pickup trucks. IH made light trucks from 1907 to 1975, beginning with the Model an Auto Wagon (sometimes called the "Auto Buggy"). Production commenced in February 1907 at IH's McCormick Works in Chicago, although production was moved to Akron, Ohio, in October that year. Powered by a horizontally opposed, air-cooled twin around 15 hp (11 kW), it was a right-hand-drive model popular in rural areas for high ground clearance on the poor roads typical of the era. It featured a rear seat convertible to a carrier bed. The Auto Wagon was renamed the Motor Truck in 1910, and was a forerunner to the successful modern pickup truck. They were called IHC until 1914, when the 'International' name was first applied. The final light line truck was made on May 5, 1975.

IH also had early success with the Auto Buggy, which started production in February 1907. In the mid-1940s, International released their K and KB series trucks, which were more simplistic than other trucks released in that era. This was followed by the L Series in 1949, which was replaced by the R Series in 1952, followed by the S line in 1955. In 1957, to celebrate IH's golden anniversary as a truck manufacturer, this was replaced by the new A line. 'A' stands for anniversary. With light modifications to its appearance but more serious changes under the shell (and a number of new names), this design continued in production until replaced by the 1100D in late 1969, which looked very similar to the Scout.

Corresponding with the truck "letter lines" was the Metro line of step (delivery) vans. Starting in 1938 and manufactured through 1975, the Metro series was produced and updated with each iteration of IH's truck lines. Also, special-use variants were sold, such as the Metro Coach (a bus version with windows and passenger seats) and Metro front-end section and chassis for full commercial customization. Additional variants were based on the medium-duty engine and chassis lines. 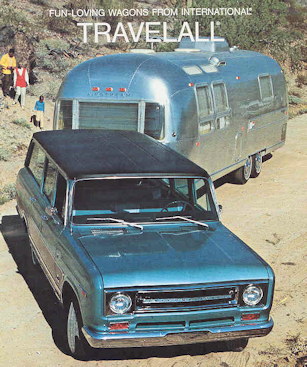 One of the company's light-duty vehicles was the Travel all, which was similar in concept to the Chevrolet Suburban. The Travelette was a crew cab, available in two or four-wheel drive. A three-door version was available starting in 1957, and a four-door version was available starting in 1961. The 1961 Travelette four-door (crew cab) was the first six-passenger, four-door truck of its time. The Scout, first introduced in 1961, is a small, two-door SUV, similar to a Jeep. In 1972, the Scout became the Scout II, and in 1974 Dana 44 axles, power steering, and power disc brakes became standard. After the Light Line pickups and Travelall were discontinued in 1975, the Scout Traveler and Terra became available, both with a longer wheelbase than a standard Scout II.

IH abandoned sales of passenger vehicles in 1980 to concentrate on commercial trucks and school buses. Today, the pickups, Travelalls, and Scouts are minor cult orphaned vehicles. All were also available as rugged four-wheel drive off-road vehicles.

The Scout and Light Truck parts business was sold to Scout/Light Line Distributors, Inc. in 1991.

IH was an early manufacturer of medium- and heavy-duty trucks. Although based upon truck chassis, IH also became the leading manufacturer of the chassis portion of body-on-chassis conventional (type C) school buses. In 1962, IH offered the International Harvester Loadstar which became the premier medium-duty truck. In 1978, IH offered the International Harvester S-Series, which replaced the Loadstar in 1979.

The Ford Power Stroke engine was manufactured by International Truck and Engine Corporation in Indianapolis, Ind., for use in Ford heavy-duty trucks, vans, and SUVs.

IH manufactured light, medium, and heavy vehicles for military use. Examples include a Metro van sold to the Czechoslovakian Army in 1938, as M5 Tractors and 2.5-ton M-5H-6 trucks for the US Navy and Marines in 1942, and around 3,500 2.5-ton M-5-6-318 cargo trucks provided mostly to Soviet Union and China.

Motorhomes In the 1970s, motorhomes were manufactured using IHC engines and bare chassis. Most of the bodies were constructed of fiberglass.

Lia, a subsidiary of the US manufacturer, had a long relationship with the Australian Army with the US-designed AS series trucks in the early 1950s. The AS164 2X4 used as a tractor unit and the 2X4 AS161 used as a tray back troop transport

The association between International Harvester Australia and the Australian Army developed and in conjunction with the Army Design Establishment of the Australian Commonwealth Department of Supply, designed and constructed a range of trucks for the Australian Army. With the body loosely based upon the design of cab 13 of the Canadian Military Pattern truck, the first prototype built in 1959 was the International Truck Cargo 2½ Ton General Service, Australian No.1 Mk1. which was followed by the Mk2 prototype. A variant with a mid-mounted, 20,000-pound winch, resulted in the first production model, the Mk3 entering service in 1963 – just in time for Australia's entry into the Vietnam War.

A five-ton 6X6 version was to follow with three major variants the Truck Cargo 5 Ton with winch F1 which replaced the Mk3 in Vietnam service.

The F2 a tipper version that replaced the International Harvester AB160 "teaspoon Tipper" in both Vietnam and Borneo theatres of operations.

The F5 wrecker with a lack of 4X4 2 1/2-ton trucks available because of the Vietnam War, the Mk3 was supplemented with further 4X4 production with the updated Mk4 version which shared the cab with the 6X6 variants Production of The Australian No.1. range of trucks were produced until 1973. The Mk3, Mk4, F1, F2 and F5 saw service until the late 1980s.

The Australian-designed and -built International Australian-constructed cab-over (ACCO) was first produced in the late 1960s. The ACCO is a cab over engine type truck and has been offered in 4x2, 4x4, 6x2, 6x4, 8x4, and 10x4 configurations. Engines used have been Cummins, Caterpillar, Detroit Diesel, or GMC with Road-Ranger or Allison transmissions and Rockwell differentials. The ACCO range were built to order, serving private operators, fire departments, military services, and municipal departments across Australia and New Zealand. The ACCO became the most popular product of International Harvester in Australia. The ACCO continues to be manufactured to date, under the ownership of Iveco.

International Harvester Máquinas S.A. was established with Brazilian government support as part of a project to develop a vehicle industry there. Their first product was the International S-184 heavy truck. In 1966 Chrysler purchased International's Brazilian plant.