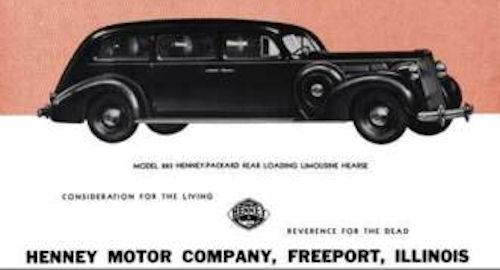 The Henney Motor Company was an American manufacturer of carriages , automobiles and automobile bodies . The company was known before the Second World War , especially by his funeral cars on Packard chassis and after the war by the electric car Henney Kilowatt . Among other things, it also produced the Henney Super Wagon .

Henney Carriage Works was founded in 1879 by John W. Henney. The company's headquarters were in Freeport , Illinois . Initially, Henney produced carriages and buggies, but also commercial wagons and funeral cars . In the first decade of the twentieth century , Henney did not cope with the transition to automobiles; the company produced exclusively horse-drawn vehicles until the First World War . Due to decreasing demand, it was liquidated in 1916. In the same year, the son of John W. Henney founded a successor company called John W. Henney Co., which now made on motorized vehicles and from 1927 as Henney Motor Co. firmierte,

Since the 1920s, Henney was one of the best-known manufacturers of ambulance and funeral vehicles. In the late 1930s, Henney manufactured up to 1,200 vehicles per year.

Henney's models were initially based predominantly on Dodge truck chassis ; the engines came from Continental or Lycoming . The bodies were each independently designed. At times, they were modeled after the Weymann artificial leather bodies , stretched over a frame made of ash wood.

After Dodge had been taken over in 1928 by Chrysler Corporation, ended for Henney the purchase of Dodge chassis. Henney then created their own chassis, which were structurally based on constructions of Auburn , Buick , Cadillac , Pierce-Arrow or Reo . In 1934, Henney resumed production of its own chassis and instead used chassis made by Cadillac, Lincoln , Oldsmobile , Packard or Pierce-Arrow, depending on customer requirements . From 1938 onwards, Henney exclusively packaged Packard chassis. The connection to Packard existed until 1954. Henneys Packard- Hearseswere partly designed unusually. The burglars were in the style of a Landaulets, in which the loading area was spanned by a fold-down fabric top.

During the Second World War, Henney continued the production of ambulances. After the war, the company was continued under new management. Henney intensified its relationship with Packard by exclusively commissioning the factory-supplied 7 and 15-seat Packard sedans, the latter primarily used as aircraft feeders. In 1950, Henney also produced nine limousines on Lincoln-based government contract, which were used by the then President Harry S. Truman .

In the mid-1950s, sales of funeral and ambulance vehicles dropped considerably. Coupled with the simultaneous decline of Packard, Henney's economic situation deteriorated significantly in a short time. Management tried to merge with commercial vehicle manufacturer Reo; however, the efforts failed. Moving to Canastota , New York did not bring any improvement; The production of funeral and ambulance vehicles at Henney ended in 1954. A restart with the electric car Henney Kilowatt failed early.

In addition to the ambulance and funeral vehicles offered Henney 1921-1931 also passenger cars , which were sold but only to a small extent. In 1929, Henney tried to establish a luxury passenger car, which was modeled after the Cord L-29 . However, it was only produced in four copies; they were all sold to friends of the owner.

In 1959 and 1960, Henney made the model kilowatts, an electric car that used the body of the Renault Dauphine and was driven exclusively by an electric motor. The project was a collaborative effort between Henney and the National Union Electric Company , both of which were linked by the same CEO. The drive was organized by the Eureka Williams Company designed a vacuum cleaner manufacturer in Bloomington ; the electrical engineer Victor Woukwas an advisor. At its presentation, the kilowatt had 18 two-volt batteries. The range was 64 km. For the model year 1960 the system was revised. Now the car had 12 six-volt batteries. The range increased to nearly 100 km.  Henney completed the cars from components that were delivered from France. In two years almost 100 vehicles were created, of which only 47 were sold. The majority of the cars were taken over by the National Union Electric Company.

The design department of Henney developed 1951 the Show Car Packard Pan American . Designed from the outset for exhibition purposes, only six vehicles were produced. It served as an essential model for the Packard Caribbean .