Automotive manufacturer of Baltimore Maryland; United States from 1953 to 1961.

Eshelman was a marque of small American automobiles and other vehicles and implements including motor scooters, garden tractors, pleasure boats, aircraft, golf carts, snowplows, trailers, mail-delivery vehicles and more. The Cheston L. Eshelman Company was incorporated on January 19, 1942, and was based on the sixth floor of an industrial building at 109 Light Street in Baltimore, Maryland, with aircraft production facilities located in Dundalk, Maryland. The company president was Cheston Lee Eshelman, the first vice-president was Sidney S. Zell (July 30, 1900 - July, 1978), and the first treasurer was Frank K. Kris (January 4, 1910 - March, 1981).

The Eshelman company began production of commercial light aircraft in Dundalk after World War II, but was best known toward mid-century for its inexpensive light garden tractors and similar machines (including the Kulti-Mower) which were widely promoted in small advertisements in the back pages of mechanical and scientific magazines.

By 1955 a second, larger model was added to the Eshelman line, a basic six-horsepower open car for two passengers also named the "Adult Sport Car". These ASCs were 64 inches (1,600 mm) long, 36 inches (910 mm) wide and 32 inches (810 mm) in height and were powered by an air-cooled rope-started Briggs & Stratton #14 engine (electric starting was optional) that permitted a top speed of 30 mph (48 km/h) and a 70 mpg‑US (3.4 L/100 km; 84 mpg‑imp) fuel consumption rate. Major ASC mechanical differences included 4.50x6 pneumatic tires with four-wheel cable-operated scrub brakes, a foot throttle, and a pedal-operated parking brake. Extra-cost options included a lawn sweeper ($39.95) and a hauling cart ($79.95). The Adult Sport Car was 40 inches wide and was equipped with headlamps and taillamps powered by a separate battery that needed occasional charging, as there was no generator. 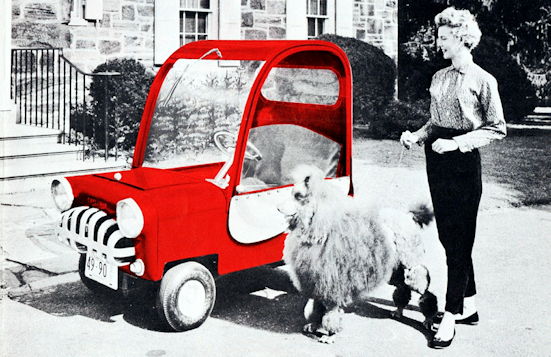 But on Friday, February 10, 1956, a massive fire consumed the Eshelman factory. Two hundred firefighters and two fireboats helped to extinguish the blaze, and the fire resulted in $500,000 in damage.

At about that time the city of Baltimore began taxing manufacturing inventories and equipment, and so in February 1957 Cheston Eshelman signed a ten-year contract with the Charles D. Briddell Company, makers of cutlery, to build Eshelman cars and other vehicles at its Crisfield, Maryland, facility. A decision was also made to upgrade the cars, and Eshelman introduced several versions of the new and more-streetworthy two-passenger "Sportabout", a 675-pound enclosed model of the Adult Sport Car with a Model 23 Briggs and Stratton 8.4 horsepower single-cylinder engine. The 72-inch-long Eshelman Sportabout had more appurtenances, including electric starting and windshield wiper, reverse gear, directional signals, a 60-inch tall aluminum top, doors, spring suspension, foam upholstery, and a horn. All Sportabouts were painted red with silver doors and were shipped to buyers' addresses in wooden crates.Television star Bob Cummings (The Bob Cummings Show) became a spokesman for the Eshelman company in newspaper and magazine ads, and often featured Child Sport Cars on his programs. A new battery-powered child's car, the Model 200, was added, and thousands of the company's blue Mailster mail-delivery vehicles were seen on the streets of America, closely resembling the very similar Cushman mail carrier design. 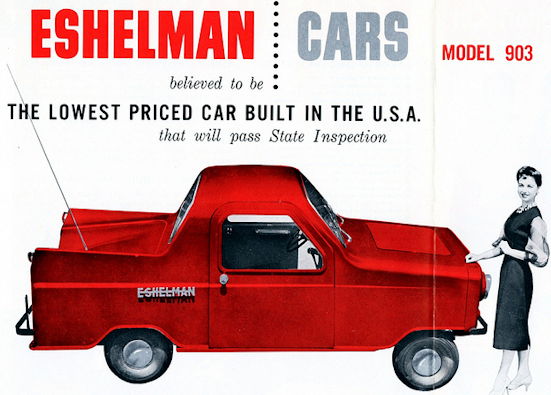 By 1959 the Eshelman company, now renamed the Eshelman Motors Corporation, introduced a trio of much larger $1,395 two-cylinder air-cooled closed models, the fiberglass-bodied Models 902 delivery vehicle, 903 coupe and 904 pickup truck, all advertised as seating three passengers abreast. However, according to reports only about twelve or so were produced.

Eshelman then turned to buying new fleet-model Chevrolet Corvairs in quantity, which were re-trimmed and re-badged with special gold-colored Eshelman insignia and other appearance changes and marketed to the public as "Eshelman Golden Eagles". When General Motors learned of this operation, it ordered Eshelman Motors to cease and desist, but Eshelman continued to market the appearance package for those who wished to apply them to their personal cars.

Concurrently, Cheston Eshelman moved to Miami, Florida, and worked on marketing his patented "crash absorber," a pioneering 15 mph (24 km/h) energy-absorbing front bumper fashioned from a vehicle's spare tire. He often demonstrated the bumper by ramming his own car into retaining walls.

In 1967, Eshelman produced the final Eshelman Golden Eagle Safety Cars based on new 1967 Chevrolets, all equipped with front "crash absorbers" and sold through several used-car agencies. This marked the end of Eshelman's automotive efforts and other operations, but he continued to invent and patent his ideas for decades. He died on November 7, 2004, in Hialeah, Florida.