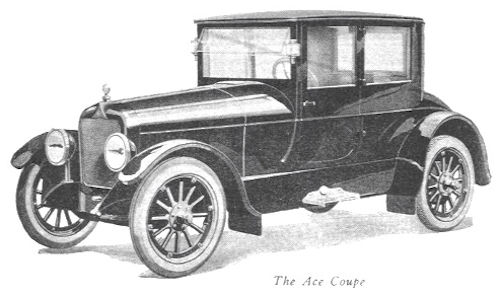 The Ace was an American-assembled car made in Ypsilanti, Michigan by the Apex Motor Car Company, which was reorganized as the Apex Motor Corporation in 1921. The initial batch of cars assembled were sent to Seattle, Washington dealer FE Earnest, who had the idea for the Ace after he was unable to secure a steady supply of new cars for his dealership.

The most interesting feature of the Ace was the Guy Disc-Valve motor, created by engineer Fred M Guy, and Otto W. Heinz. Initially, it was prepared as a four-cylinder engine for production in the Hackett, but the company folded before it was ready.

In April, 1921, Guy and Heinz left the Apex Motor Corporation, obviously with the support of Apex, to found the Guy Disc Valve Motor Co. in Ypsilanti. In mid-1921, a Model H tourer with a conventional Herschell-Spillmanstraight-6 was added, with a selling price $2,000. The man at the helm at Apex was by now Harry T. Hanover. For 1922, the Guy engine was gone. The Model F "Pup" was added to the range, fitted with a conventional 4-cylinder Gray-Bell engine, and priced at $1295.It was sold beside the Model L "Scout" with a smaller than previous Hershell-Spillmann straight-six engine, and the new top of the line Model C "Combat" with a 340 c.i. Continental Six engine. The sixes ranged in price from $2260 to $3150.

Most Ace cars were tourings, with a few roadsters, and a 4/5 passenger "Coupe-Sedan" with a custom-built look. The "Combat" line also included an attractive speedster in the Kissel Gold Bug pattern.

Apex was initially involved in the Diamond Cab project, which also included Gray Motor Corp., and Guy Disc Valve Motor Co. Within a few months, these plans became obsolete as Diamond Cab got new owners, resulting in the cab built by Elcar, and another cab built by the Driggs Ordnance & Manufacturing Corp.