The Triumph Vitesse is a compact six-cylinder car built by Standard-Triumph from May 1962 to July 1971. The car was styled by Giovanni Michelotti, and was available in saloon and convertible variants.

The Triumph Vitesse was introduced on 25 May 1962, re-using a name previously used by the pre-Second World War Triumph company from 1936–38, and was an in-line 6-cylinder performance version of the Triumph Herald small saloon. The Herald had been introduced on 22 April 1959 and was an attractive 2-door car styled by the Italian designer Giovanni Michelotti. By the early 1960s, however, Triumph began to give thought to a sports saloon based on the Herald and using their 6-cylinder engine. Michelotti was again approached for styling, and he came up with a car that used almost all body panels from the Herald, combined with a new front end with a slanted "Chinese Eye" 4-headlamp design.

Standard-Triumph fitted a 1596 cc version of their traditional straight-6 derived from the engine used in the Standard Vanguard Six, but with a smaller bore diameter of 66.75 mm (2.628 in), compared with the 74.7 mm (2.94 in) bore on the Vanguard, equipped with twin Solex B32PIH semi-downdraught carburettor These were soon replaced by B321H carburettors, as the accelerator pumps proved a problem The curious observer will notice a "seam" on the cylinder block between the third & fourth cylinders revealing the humble design beginnings from the 803 cc Standard 8 block of 1953. The gearbox was strengthened and offered with optional Laycock De Normanville 'D-type' overdrive that offered a top gear with a 20% higher ratio (the equivalent change from 3rd to 4th in a standard box, giving more relaxed and economical cruising at the expense of slight oil drag from the pump in the overdrive unit. The rear axle was changed to an uprated differential. Front disc brakes were standard as were larger rear brake drums, and the Herald fuel tank was enlarged, retaining the handy reserve feature (essentially a curved pickup pipe that could be rotated to dip into the last few centimetres of fuel) of the smaller Herald tank. The front suspension featured uprated springs to cope with the extra weight of the new engine, but the rear suspension was basically standard Herald—a swing-axle transverse-leaf system which quickly proved inadequate for the relatively powerful Vitesse. The chassis was basically the same as the Herald, and the Vitesse was available in convertible and saloon forms; a coupé never got beyond the prototype stage. A handful of Vitesse estates also were assembled to special order at Standard-Triumph's Service Depot at Park Royal in West London.

The interior was much improved over the Herald; wooden door cappings were added to match the wooden dashboard and the car featured better seats and door trims. Optional extras included a vinyl/fabric, (Webasto), sunroof on saloon models. Exterior trim was also improved with stainless steel side trim and satin-silver anodised alloy bumper cappings (replacing the white rubber Herald design).

A year or so after the car's launch, the Vitesse received its first facelift; the dashboard was revised with a full range of instruments instead of the large single dial from the Herald, and from September 1965, at commission number HB27986, the twin Solex carburettors were replaced by twin Stromberg CD 150 carburettors. Power output increased from the original 70 bhp (52 kW) at 5,000 rpm & torque of 92.5 lb·ft (125 N·m), enough to provide a useful performance boost and making the car a much more flexible performer. There was a claimed, although somewhat optimistic increase of 13–14 bhp, and the motoring magazine tested top speed rose to 91 mph (146 km/h), with the 0–80 mph (0–129 km/h) time decreasing from 46.6 seconds to just 33.6 seconds.

The Vitesse 6 sold extremely well for Triumph, and was by some way the most popular Vitesse sold during the model's lifetime. The car was well liked for its performance and reasonable fuel economy, and the well-appointed interior. The Vitesse had few rivals for the price: able to perform as well as many sports cars, but with room for a family. The convertible in particular was virtually unique in the marketplace and another genuine 4-seater sporting convertible would not reappear from a British manufacturer until the Triumph Stag several years further down the line.

The Vitesse 6 convertible was exported to the US as the left-hand drive Triumph Sports 6, from 1962 until 1964. It was marketed as a "limited edition car", but because of its retail price only 679 were sold before it was withdrawn.

The Sports 6 was perhaps better suited to American highways than was the Herald, but it faced stiff price competition from cars such as Ford's new Mustang. The Vitesse Saloon was not officially imported to the US, although a few do come up as P.E.D. (Personal Export Delivery), cars usually imported by American service personnel. Original US price (POE East Coast) was $2,499 for the Sports 6 Convertible, which was usually delivered in White, Signal Red or Black.

In 1966 Triumph upgraded the engine to 1998 cc, in line with the new Triumph GT6 coupé, and relaunched the car as the Vitesse 2-Litre. Power was increased to 95 bhp (71 kW), endowing the new car with a 0–60 mph time of just over 11  s. (The 2-Litre was advertised by Triumph as "The Two Seater Beater"), The performance increase was welcome, but it highlighted the deficiencies of the rear suspension, also noted on the new GT6 and the Spitfire. There were detail modifications for the 2-litre, including a stronger all synchromesh gearbox and uprated brakes, and an improved stronger differential than the Vitesse 6 (still 3.89:1) ratio. The overdrive GT6 used the same differential, though the cars without overdrive specified used a 3.27:1 differential of the same dimensions, though that was not fitted to the Vitesse as standard. There was a satin silver anodised aluminium-alloy cowling above the reversing light, and badges on the side of the bonnet read 2 litre.

The Vitesse Mark 2 was launched in 1968 as the final update to the Vitesse range. Essentially intended to be Triumph's answer to growing criticism of the rear suspension, the Mark 2 was fitted with a redesigned layout using Rotoflex rear couplings. This system, also shared with the new GT6 MKII and the earlier GT6 MkIIIs, (GT6+ in the US market), tamed the wayward handling somewhat and endowed the Vitesse with more firm, progressive roadholding. The solid swing axles of the herald and earlier Vitesses had camber changes of some 15 degrees from the limits of travel. By fitting a lower wishbone and the divided drive shaft but retaining the transverse leaf spring as the top link the camber change was reduced to about 5 degrees. While this was a considerable improvement it was still a system that struggled to keep up with even the crude spring located live axles of many competitors and could come nowhere near any good link located live axle or true double link IRS system as seen in the TRs.

There were other improvements: the engine was tweaked once more to provide 104 bhp (78 kW), cutting the 0–60 mph time to just over 11 seconds and providing a top speed over 100 mph (160 km/h). The main changes were to the valve timing, to give earlier opening and later closing of the inlet valves compared with the earlier 2 litre engine. (38/78 btdc/atdc for the Mk2 vs 30/60 for the 2 litre). Design changes to the cylinder head allowed for increased inlet valve diameters and better porting. These included a change in the design of the right side of the head where in the 2 litre the manifolds covered the head bolts necessitating removal of manifolds to torque the head 500 miles after any top end work! the Mk2 head was wider at full thickness and the manifolds were correspondingly shorter. The exterior featured a new grille, Rostyle wheeltrims and silver painted steel rear panel, (described by Triumph as "ceramic"), and the interior was upgraded once more in order to share parts with the new Herald 13/60. A new colour range was offered for the Mark 2 models. The aluminium cowling above the reversing light remained, and gained an oblong chromed VITESSE badge. The separate chromed mezak TRIUMPH letters on the bonnet and the boot lid were also deleted. The badges on the bonnet sides were changed to read Mk2 instead of 2 litre.

This was the ultimate Vitesse, a saloon or convertible with performance easily superior to an MGB or Sunbeam Alpine sports car but with four proper seats and a large boot. The Vitesse sold well until its withdrawal in July 1971, a year before the new Triumph Dolomite saloon entered the performance luxury sector for Triumph, and two years before the Dolomite Sprint variant added another high-performance sports saloon to the range. Although the Vitesse was an older model, it proved to be more reliable than its replacement. 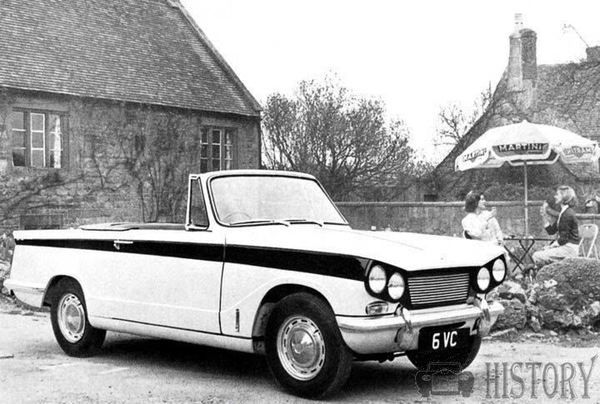