In July 1993, the fourth generation of the Supra came on the market (model code JZA80) internationally, this type is called "Supra MKIV" (fourth-generation supra).

The fourth Supra was produced exclusively in Japan and exported to only a few countries. Due to decreasing demand in the sales markets (partly due to stricter emission standards), Toyota stopped importing for Europe in the spring of 1996, while the US market was still served until 1999.The last Supra MKIV was launched in summer 2002 for the Japanese home market.

The model MKIV was available in the body styles Coupé and Targa , each with front engine and rear-wheel drive. The engines came from the Toyota 2JZ series. GE called the naturally aspirated engines , GTE the turbocharged engines . The Yamaha- developed aluminum cylinder heads with four valves per cylinder were controlled by two overhead camshafts (toothed belt drive). The A343E automatic transmission was available at no extra cost. Optional was the aerodynamic package with powerful rear wing and active front spoiler.From 1998, the cylinder heads had a variable camshaft adjustment (VVT-i).

Aluminum was used for bonnet, roof and suspension and brake components . Only 36% of the construction was made of high strength steel . All other steel sheets were made from "Galvanealed Steel", which should provide almost perfect protection against rust. The tank (capacity: 80 liters) was made of very light polyethylene material . Due to additional reinforcements, the body of the Targas was slightly heavier than the coupe.

Over the entire production period, the Supra MKIV was equipped with driver and passenger airbags as well as side impact protection in the doors. In addition to the alarm system was an immobilizer as standard. In Japan, there was also a reduced trim level without front passenger airbag. 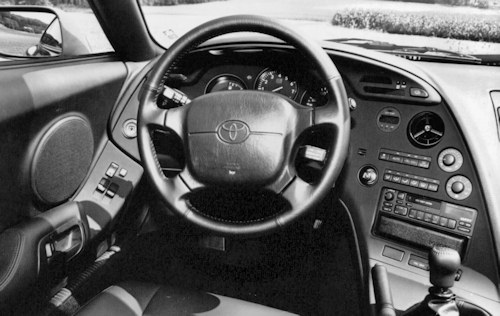 Interior: In the passenger compartment dominated black leather, the driver's seat was electrically adjustable. The height-adjustable steering wheel and gear knob were also upholstered in black leather. In Switzerland there was optional beige leather interior, in other markets (USA, GB, Japan etc.) in addition to leather and fabric. The dashboard and the panels of the doors were made of black plastic. The cockpit was extremely half round the driver's seat positioned around and all controls were within reach of the driver. The speedometer unit Toyota equipped with classic round instruments. As usual in sports cars, perched in the middle of the rev counter , flanked by Tank and temperature display on the left and speedometer on the right.

The MKIV has been extensively tested by domestic and foreign car magazines and compared with the competition in its vehicle segment. In the article "The Fantastic Four" of the AMS (Issue 25, 3 December 1993, comparative test: Toyota Supra MKIV , Chrysler Viper RT / 10 , Ferrari 348 GTB , Porsche 911 Carrera ) convinced the MKIV

The mechanical control of the turbo system is realized by four valve flaps:

The valve flaps are actuated by push rods from the associated control boxes as soon as they are pressurized. For fine tuning, the engine-ECU varies the pressure on the control boxes via electronically controlled solenoid valves (VSV) and thus influences their function. The interaction of the control boxes and solenoid valves is designed so that in the case of an electronic problem, the mechanical control is largely maintained and a continuation (possibly in emergency operation) is possible. Malfunctions of the mechanics can also be partly recognized, whereby the ECU then activates or deactivates the associated solenoid valves accordingly, so that it is also possible to continue driving with possibly limited power.

At low engine speed, the engine-ECU keeps the VSV of the exhaust control valve of the second turbine closed. All exhaust gases of the six-cylinder (red) are led exclusively to turbo no. 1, which ensures early and fast response of this loader. The build-up of pressure is controlled by the downstream VSV (via ECU) and corrected if necessary.

So that the second turbocharger is not brought "cold" to full power against the already existing system pressure (which would be detrimental to the mechanics of the supercharger), opens with increasing engine speed initially the exhaust gas bypass valve. As a result, part of the current amount of exhaust gas flows through the second supercharger, whereby it is gently accelerated.

In the start-up phase of turbo no. 2, its charge pressure is first supplied to the intake system via a reed valve (below intake air control valve).

At higher engine speeds, the exhaust control valve and intake air control valve open, so that Turbo No. 1 and Turbo No. 2 can compress the intake air together. The turbos are now running parallel.The bypass valve ( wastegate ) on turbo no. 1 regulates the total boost pressure. The valve is primarily controlled by the associated boost pressure-dependent control box. The secondary regulation by the downstream VSV influences the effect of the control box, however, insofar as the standard programmed system boost pressure can not rise in total higher than approx. 0.7-0.8 bar.When the throttle is removed, the throttle closes. The resulting negative pressure in the suction chamber opens via a vacuum line a recirculation valve (blow-off valve), which redirects the compressed air back into the intake system in front of the turbos .

Depending on the engine, different transmission / differential variants were used:

As standard, Toyota equipped turbo models with a limited-slip differential for the Torsen system and a (traction-off) electronic traction control (TRC).

As standard, the MKIV brought its performance on 255 / 40er rear wheels in 17-inch format on the road (front 235 / 45er). Independent suspension with upper and lower wishbones on the front axle, as well as a triangular wishbone on the top and three rod core on the rear axle ensured in conjunction with stabilizers and gas shock absorbers for good road holding. Naturally aspirated and turbo models for the Japanese market were equipped with 16-inch wheels.

The traction control (TRC) realized in cooperation with the ABS if a wheel had no road holding. In this case the ABS reduced the performance of this wheel to eliminate slip problems. At the same time, the TRC intervened in the engine management system to adjust the ignition timing and activate an electronically controlled second throttle to reduce engine torque. Models with naturally aspirated engines had no TRC. 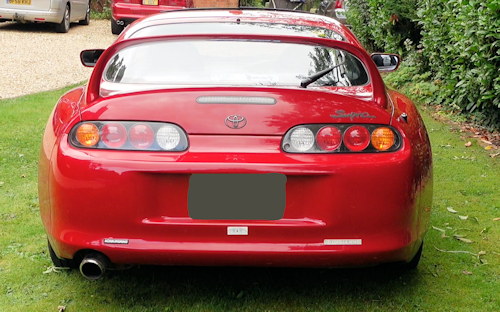 The rear wing of the MKIV took over important functions to stabilize the vehicle at high speeds and guaranteed corresponding downforce on the rear axle. For sale in 1993, the aerodynamics package was still banned in Switzerland. Thus, the first Swiss MKIV were delivered without a rear wing and shut down the active front spoiler.

The active front spoiler drove automatically from 90 km / h and from 70 km / h back to its starting position below the front apron. The spoiler could also be operated manually by the driver from the cockpit. In the models without rear wing (see Switzerland), the active front spoiler had to be shut down, as both components were coordinated.

Directly behind the front central inlet stood the water cooler (in AT models the combined water / transmission oil cooler), as well as the radiator of the air conditioning and power steering . The two side inlets directed air to the brakes. The right-hand intake (seen from the driver's seat) was used in addition to the charge air cooler , the left one for the transmission oil cooler (EU models only). The hood on the hood lowered the temperature on the exhaust manifold . Behind the doors there were more openings to cool the rear brakes. In the right rear channel was also a cooler for the differential.

The hood on the hood and transmission and differential oil cooler were available only for Europe specifications. Compared to countries with a speed limit, the units should be able to be supplied with more cooling due to possible continuous load with a higher average speed.

A factory-installed Toyota Supra HV-R (Hybrid), based on the model of the Japanese Super GT series, was the first hybrid vehicle in the world to win a race. At the Tokachi (Japan) 24-hour race in July 2007, the car had in addition to a 150-kW electric motor in the rear two small 10-kW electric motors in the front wheels. Instead of being stored in an accumulator , the energy was stored in a high-performance capacitor . However, the main engine was Toyota's 5.5-liter V8 engine (3UZ-FE) with about 475 hp and 510 Nm.

The Supra MKIV achieved a surprisingly high popularity in 2001 when it starred in the US action movie The Fast and the Furious .