At the Paris Motor Show in September 2012, the second generation of the Auris (E180) was presented, which is produced in the English plant Burnaston and built since 19 January 2013 With full 5 Stars in the Euro-NCAP crash test (2013).

This new design line of Toyota offered for the first time in addition to the only five-door hatchback since 13 July 2013 as a station wagon called Touring Sports.Unveiled at the 2012 Paris Auto Show, Toyota  a world-premier version of the Auris , which is 285 mm longer than the five-door hatchback model. It is also the first model in this segment to offer a full hybrid . The wheelbase remains at 2600 mm exactly like the five-door, but the sidelines run a little differently. Due to the greater length of the trunk provides more cargo volume.  The rear bumper and the tailgate received a new design, while the sill is 80 mm deep. the equally important for the air resistance end face was reduced by the 55 mm lower height of this generation.

In June 2015, the Auris received a facelift, which can be seen in the new family design. On 12 September of the same year, the revised vehicle came on the market. Above all, the redesigned model can be seen at the front: a wide, upwardly offset chrome clip connects the headlamps, which now emit LEDs . Below the more powerful bumper, the lower grille now runs the entire width of the front.Also, the rear has been changed, which can be seen in the horizontally seated reflectors and chrome trim. The overhangs are a bit longer at the front and back; both the station wagon (plus four centimeters) and the five-door (plus six centimeters) put on something in total in length. 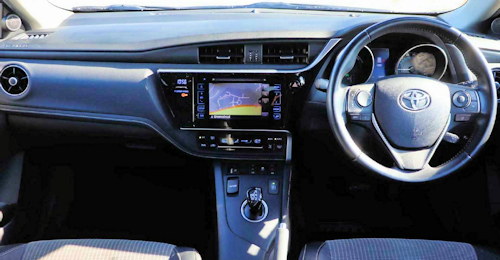 Technically, there are also new features: A completely new and 1.2-liter turbocharged direct injection engine with variable valve timing and cylinder head integrated exhaust manifold. The two-liter turbo diesel was also adjusted and replaced by a 1.6-liter BMW engine.The smaller diesel (1.4D-4D) has been extensively redesigned according to Toyota and is equipped with a CO 2 emissions of 105 grams per kilometer of the most efficient diesels in the class up to 90 HP.

This Auris ,has five different engines were available for launch in January 2013, all of which were taken over by the predecessor and only slightly revised: two gasoline engines, a hybrid engine and two diesel engines. All engines meet the Euro 5 emissions standard.

E210 (2018) At the 88th Geneva Motor Show in March 2018, the third generation of the Auris was presented. Later, however, it was announced that the model is offered again worldwide as Corolla .