The Toyota Estima is a van that has been produced by Toyota since 1990. In Europe , he was offered as a successor to the Toyota Model F (Space Cruiser) until 2006 and in North America as the successor to the Toyota Van until 1997, each as a Toyota Previa . In Australia, he replaced the Toyota Tarago and is offered there under the same name. As Toyota Previa he is still in markets such. B. New Zealand , Taiwan and Hong Kong offered. Depending on the equipment variant, it can accommodate up to eight people.

The special feature of the models of the first generation from May 1990 to December 1999 were the underfloor engine (between the front and rear axle mid-engine) and the rear wheel drive. This concept brought many advantages: Balanced weight distribution front / rear, through the compact front, a shorter overall length with a large interior length. In order to keep the interior floor level, an engine had to be specially developed that could be accommodated between the underbody and the passenger compartment. For example, Estima engines were used in the Tima series. Disadvantages of this unique concept were poor accessibility of the engine, less interior height through the transmission tunnel and poorer winter performance than with front-wheel drive. Accordingly, the next generation received front-wheel drive, like all other minivans too.

The 2TZ engine was a 4- cylinder in - line engine , tilted 75 degrees to the right, mounted longitudinally. In order to carry out maintenance work on the motor (eg changing. Iridium - Spark km every 90,000, valve clearance check every 80,000 km), the right front seat and the floor panel had to be removed right. The camshaft of the DOHC 16-valve engine was powered by a maintenance-free roller chain . The mixture preparation worked with a multi-point electronic injection , which was controlled by the engine control unit ECU. 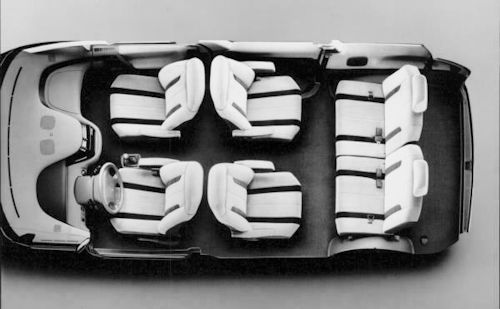 Since the small height of the space under the vehicle floor left no room for the auxiliary units, they were like a "normal" car under the bonnet. Alternator , oil pump for the power steering and the compressor for the air conditioning and the radiator fan with Visco coupling were driven by means of grooved belts from a PTO from the mid- engine. The starter was on the left side of the engine, the water pump on the front of the engine.

The Estima was powered by a five-speed manual or a four-speed automatic transmission from Aisin AW on the rear wheels. In some markets, the Estima could also be supplied with permanent four-wheel drive with central differential visco coupling .

The front axle had MacPherson struts with lower wishbones. The rear axle was designed for models with simple equipment as a rigid axle with upper trailing arms and coil springs. The upgraded models had independent suspension with lower wishbones and upper crescent-shaped wishbones.

In the standard version, the first generation Toyota Estima was 4750 mm long and 1803 mm wide. In Japan, two narrower versions were offered, the Toyota Estima Lucida and the Toyota Estima Emina , which were about 110 mm narrower and 70 mm shorter than the normal version . The reason for this was the Japanese vehicle tax, which is based on the length and width of the vehicle. The narrower variants fell into a lower tax code.

In North America, the Estima was sold as Previa from 1991 to 1997. The Previa quickly became a common type of vehicle in the US, despite the relatively high price and fuel consumption. Mainly because of the popularity of Japanese vehicles in the United States at a time when domestic vehicles were perceived as of inferior quality. The mid-engine concept proved to be a particular weakness in the US as it did not offer the option of installing a more powerful engine. The competition such. B. Chrysler Voyager also offered V6 engines. As of 1994, Toyota solved this problem by providing a twin-screw Roots compressor with intercoolerinternals. This increased the engine output to 160 hp (120 kW). Originally the engine, now called S / C, was only available as an option in 1994 and 1995. From 1996, the naturally aspirated engine was discontinued, and the S / C became the standard engines. In North America, the Previa 1998 was replaced by the on the Toyota Camry -based Toyota Sienna . 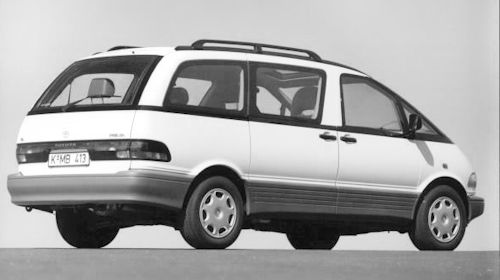