The RV-1 was a 2-door wagon concept car based on the Celica and shown during the 1971 Tokyo Motor Show.

The front had vertical corners instead of the normal Celica's sloping park lights (indicator lights in some markets). The bonnet was also extended forward to match. An unusual grill was used featuring large round holes instead of the more common slats or hexagonal holes.

The front windows and the doors remained the same as the Celica but the roof line was extended to cover the rear passenger seats and then continued as a thin spine to the rear of the car. On each side of the spine a centre hinged gull wing window completed the roof and continued down to the waistline. A large integral roll barcompleted the rear and also held up the rear of the roof spine. The tail lights and rear indicators shown through many small round holes in the rear face of the bodywork. Unusually for Celicas, the rear bumper had cut-outs to house red reflectors and reversing lights. A 1 metre wide tail gate with a frameless wind-down window occupied the centre of the rear. The centre section of the bumper moved with the tail gate instead of being fixed directly to the body.

A tow bar was fitted so that it could be shown with the Marinetta.

The RV-1 was designed a part of a recreational vehicle system that included the RV-1 car, the Marinetta trailer (which included a fibreglass dinghy), a 5-person inflatable tent and a jet ski on its own trailer.

The SV-1 Celica liftback prototype was also shown at the same time at the 1971 Tokyo Motor Show. The RV-1 never went into production but the SV-1 did. 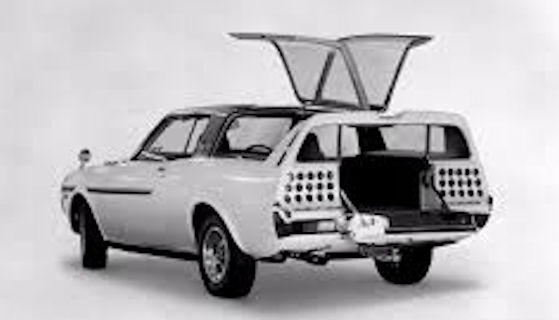