In October 1993, Toyota launched the sixth generation Celica for the 1994 model year. 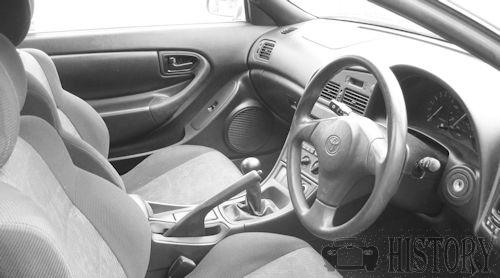 In Canada, the Celica GT Liftback with "Sports Package" is badged GT-S. Styling of the new Celicas was acclaimed by most publications as "Supra-esque" with four exposed headlights, and did also provide a visual resemblance to the Soarer introduced in 1991. Celicas were available in either notchback Coupe or Liftback form, with the GT Sports Package available only on the liftback. New safety equipment in the form of driver (and then later passenger) airbags were standard, and anti-lock brakes were available on all models. Many Celicas also sported CFC-free air conditioning.

Initially the Japanese Domestic Market (JDM) models were SS-I and SS-II. The ST205 GT-Four was launched in February 1994, and the Convertible in the Autumn of the same year. The width of this generation was no longer in compliance with Japanese Government regulations concerning exterior dimensions, which added an additional tax liability on Japanese buyers. This generation also saw a badge engineered version without the headlight treatment, called the Toyota Curren, and was sold only in Japan at Toyota Vista Store locations, allowing the Celica to be sold at different retail sales channels. The Celica was exclusive to Toyota Corolla Store locations.

Production of the GT-Four ST205 (or All-Trac as it was known in the US), continued for the Japanese, Australian, European, and British markets. This version was to be the most powerful Celica produced to date, producing 178 kW (239 hp) (export version) or 187 kW (251 hp) (JDM) from an updated 3S-GTE engine. Influenced strongly by Toyota Team Europe, Toyota's factory team in the World Rally Championship, the final version of the GT-Four included improvements such as an all aluminum hood to save weight, four-channel ABS (with G-force sensor), an improved turbocharger (incorrectly known by enthusiasts as the CT20B), and Super Strut Suspension. The 2500 homologation cars built to allow Toyota to enter the GT-Four as a Group A car in the World Rally Championship also sported extras such as all of the plumbing required to activate an anti-lag system, a water spray bar for the Intercooler's front heat exchanger, a water injection system for detonation protection, a hood spoiler mounted in front of the windscreen to stop hood flex at high speed and the standard rear spoiler mounted on riser blocks. The car proved to be quite competitive in the 1995 World Championship. However, the team was banned from competition for a year after the car's single victory due to turbocharger fixing – a device that meant there was no air path restriction on the intake – when the jubilee clip was undone this would flick back into place so as to go un-noticed by inspectors. Toyota has always claimed that they knew nothing of the fix – but opponents say it was one very cleverly engineered device. In some respects this car is a true sports car; in order to qualify for rallying it has a lot of special features and a unique strut arrangement.

In Australia, the Celica ST204 (2.2-liter) was offered in SX and ZR trim levels. The ZR has standard SRS Airbag, fog lights, alloys, and other features. The limited edition SX-R was offered in 1998–1999. Based on the SX, this model came with black/red interior, white-faced speedometer and tachometer, fog lights, and alloy wheels.

The ST205 was the final GT-Four Celica which was available in Australia only in 1994. There was a limited delivery of only 77 units ST205 with each vehicle came with an individual numbered plaque in the cabin and Group A Rallye badges on the hatch. All Australian models were taken from the 2500 homologation run and had black leather interior and a full size spare wheel. The only option being a moonroof (17 of the 77 were available with this).

The fourth generation convertible was introduced in 1994. Built off of the GT coupe, the conversion took place in the ASC facility in Rancho Dominguez, California. The vehicle arrived in the US as a partially assembled vehicle. At ASC, the roof was removed and a three-layer insulated and power-operated top was installed, producing a vehicle that was virtually water and windproof.

Like its Coupe and Liftback siblings, the American GT Convertible is ST204 with 5S-FE engine, while the Japanese Convertible, and European GT Cabriolet are the 3S-GE powered ST202. The JDM soft top Celica was offered as the base model Convertible Type X with either manual or automatic transmission, and the fully equipped automatic only Convertible.
In August 1995, minor changes were given to all JDM model Celicas, and the SS-III was added into the line up. All models received new rear combination lamps, and if fitted, the new style rear spoiler. The front drive models received new a front bumper design. The SS-III came with standard Super Strut Suspension and side aerodynamic rocker panels. The GT-Four also got side rocker panels, restyled rear spoiler, and new alloys.

The 1996 Celica for export market received the same front restyling as the Japanese models, although the tail lights were untouched. The new front bumper has two smaller sections on each side of a smaller air dam as opposed to a single large air dam in previous models. Also new were optional side skirts to improve its aerodynamic efficiency, as well as a redesigned rear spoiler. The GT models came with standard driving lights, and the ST models without the optional driving lights had black grills fill in their place.

To celebrate 25 years of Celica, the SS-I and SS-III Special Edition were released in Japan, and the 25th Anniversary ST Limited and GT Convertible marked this occasion in the US. These Special Edition Celicas have special emblems on the front fenders, and the inside on the rear view mirror hanger, and the name Celica was printed on the front seats as well.

For 1997, the only change in the North American Celica was the discontinuation of the GT coupe. Another minor change was given to JDM Celicas in December 1997. Projector headlights were optional for all models. The 3S-GE engine on the SS-II and SS-III received VVT-i, the SS-III was given a BEAMS tuned 3S-GE engine. WRC style high rear spoiler returned on the GT-Four and also standard on the SS-III.

In 1998, the underpowered ST model was discontinued in the USA, leaving only GT models. In addition, the GT coupe returned after a year's absence. The Celica line up was simplified even further in 1999 by eliminating all coupes, leaving only the GT Liftback and GT Convertible. In the UK, Toyota released the SR based on the 1.8 ST. The SR has full body kit, mesh grille, 16 inch alloys, and upgraded sound system. The GT-Four was still offered in Japan. Also in early 1999, Toyota released pictures of their XYR concept car, which would soon become the next Celica. 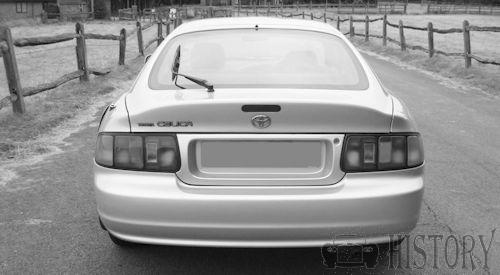