The second generation Celica was released for 1978 model year (production began in late 1977), and was again available in both Coupe and Liftback forms. Interestingly, it was designed in the United States by Toyota's Calty Research Design studio in California. The Coupe was no longer a true hardtop; both Coupe and Liftback had frameless door glass but featured a thick "B" pillar. David Stollery was responsible for its design.

From 1979 to 1981 the Griffith company in the US offered a Targa style convertible conversion to the Coupe. They were called the SunChaser and had a removable Targa top and a folding rear roof, much like the '67 Porsche 911 soft-window Targa. These were Toyota approved and sold through Toyota dealers. Over 2000 were produced.

The second generation Celica can also be broken down into two series of release (known as Series A and Series B). These two Celicas were only distinguishable by appearance – both having the same engine capacity. The original Series A Celica (1978–1979) was released with round headlights and chrome bumpers for lower grades. The higher grades such as GT and all US models have black rubber bumpers. The facelift model Series B Celica (1979–1981) was released with square headlights, revised tail lights. They came with chrome bumpers with rubber protectors on each corners, or for certain models with all polyurethane black bumpers such on the GT and all US spec cars.

Power for North American models was provided by a 2.2 L 20R engine for both ST and GT models. Japan and other markets had 1.6-, 1.8-, and 2.0-liter powerplants. This new generation offered more safety, power and fuel economy than previous models, and was awarded Motor Trend's "Import Car of the Year" for 1978. Japanese models were ET, LT, ST, SE, XT, GT, and GTV. The GT and GTV have an 18R-G Twincam engine. In late 1978, the GTV was replaced by GT Rally.

The limited edition "US Grand Prix" GT Liftback was offered in 1980 due to Toyota's connection to the U.S. Grand Prix West in Long Beach, California. For 1981, the North American models were given a bigger engine, the 2.4-liter 22R which was simultaneously fitted to the Pickup. To celebrate the Celica 10th Anniversary, the GTA Coupe was released. This was basically a GT Coupe with 4-speed automatic transmission, Supra style interior, power windows, upgraded sound system and alloys. The GTA is distinguishable by the black/gold two tone paint and a "GTA 10th anniversary" plaque on the center console. 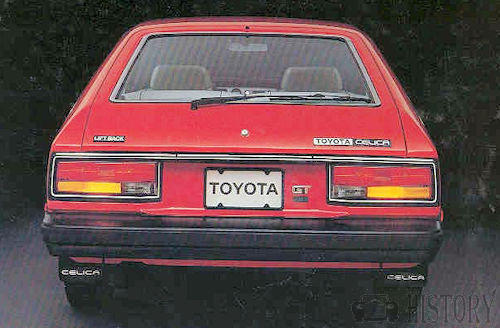 There were about 70 different variants of second generation Celica sold in Japan over the model's life time. At its pinnacle in 1979, Toyota retailed 49 versions at once.

Toyota launched the Celica Camry, a four-door sedan, in the Japanese market during January 1980. This model was essentially a second generation 1977–1981 Toyota Carina (A40 and A50) with an elongated front-end styled to resemble the 1978–1981 Celica XX, known as the Celica Supra in export markets. Unlike other Celicas, this Carina-derived model is a four-door sedan rather than a coupé or liftback. Toyota replaced the Celica Camry upon the arrival of the front-wheel drive Toyota Camry (V10) in 1982 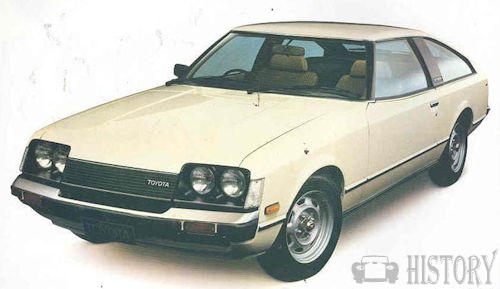