Displayed at the October 1970 Tokyo Motor Show and marketed in December of the same year, the Celica was a personal car that emphasized styling and driving enjoyment. Japanese models were ET, LT, ST, GT, and GTV (which was introduced in 1972, the V standing for Victory). The platform was shared with the Toyota Carina, a vehicle exclusive to Toyota Store Japanese dealerships.

For export markets, the Celica was offered in three different levels of trim; LT, ST and GT.

At its introduction the Celica was only available as a pillarless hardtop notchback coupe. The SV-1 liftback was shown as a concept car at the 1971 Tokyo Motor Show. With slight modifications, this was introduced in Japan in April 1973 as the 2-litre RA25 and 1.600 L TA27 liftbacks. It was then exported to Europe in RHD form as the 1.6-litre liftback. After the October 1975 facelift, it was available in both RHD and LHD forms in other markets. The RV-1 wagon was also shown at the 1971 Tokyo Motor Show but it did not reach production.

The Japanese GT models had various differences from the ET, LT and ST including the hood flutes, power windows, air conditioning, and specific GT trim, but shared a few things with the ST – a full-length center console and oil pressure/ammeter gauges while the LT had warning lights for these functions.

There was also the GTV version, which differed from the GT with a slightly cut-down interior, and did not come standard with things like power windows, but they were optional. The GTV has firmer suspension.

The first generation Celicas can be further broken down into two distinctive models. The first of these was the original with slant nose (trapezoid-like shape front corner light). This is for Coupe model only, TA22, RA20, and RA21. These models were released from 1970 to 1975 and came equipped with the 2T, 2T-G 1.6-liter, or 18R 2.0-liter motor. They had a 95 inches (2,400 mm) wheelbase. The second series had a flat nose (square front corner light) and slightly longer wheelbase (98 in or 2,500 mm wheelbase). This facelift model appeared in Japan in 1974, but for export was the 1976 model year. The Japanese version had engines under 2.0 liters so as to conform to Japanese regulations concerning engine displacement size, thereby allowing buyers to avoid an additional tax for a larger engine.

In some markets, the lower-end LT was equipped with the single carbureted four-cylinder 2T engine displacing 1,600 cc, while the ST came with a twin downdraft-carburetor 2T-B engine. The 2T-G that powered the high-end GT model was a DOHC 1,600 cc engine equipped with twin Mikuni-Solex Carburetors.

The first Celica for North America, 1971 ST was powered by 1.9-liter 8R engine. The 1972–1974 models have 2.0-liter 18R-C engines. For 1975–77, the engine for the North American Celica is the 2.2-liter 20R. The Celica GT and LT models were introduced in the U.S. for the 1974 model year. The top-line GT included a 5-speed manual transmission, rocker panel GT stripes, and styled steel wheels with chrome trim rings. The LT was marketed as an economy model. Mid-1974 saw minor changes in the Celica's trim and badges and slightly different wheel arches. The A30 automatic transmission became an option on North American ST and LT models starting in the 1973 model year. For 1975, the 1974 body was used, but body-color plastic fascia and sturdier chrome and black rubber bumpers, replaced the chrome bumpers used in the earlier cars (in accordance with US Federal bumper laws). Unfortunately the early 8R and 18R series engines proved to be less than durable, with early failures common. The 1974 18R-C engine's durability was improved somewhat, but the 20R introduced for 1975 proved to be a better engine in most respects.

The Liftback was often called the "Japanese Mustang" or the "Mustang Celica" because of the styling similarities to the Ford Mustang pony car, including the triple bar tail lights that are a signature Mustang styling cue and the overall homages to the muscle-car era.

In October 1975, The entire Celica lineup was given a facelift, with a revised front bumper and grille arrangement. The new model codes for facelift hardtop coupe were RA23 for general worldwide market with 18R engine, or RA24 for the American spec with 20R engine. The Liftback were coded RA28 for worldwide or RA29 for US. Also available was the TA23, which was similar to the RA23, but with the 2T engine. The RA23 and RA28 had a more distinctive bulge hood, which was lacking in the TA22 or RA20 Coupe and in the TA27 and RA25 Liftback Celica. The TA22 Celica also had removable vents mounted in the hood, which the RA23 and RA28 lacked. The RA series also had an elongated nose to accommodate the larger engine. The door vents, fuel filler cap, and interior were also different between the TA and RA series. 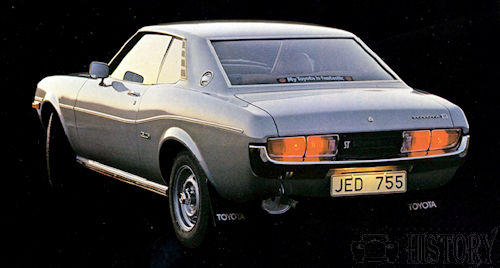