Automotive manufacturer of Dietikon;Switzerland from 1965 to 2010. 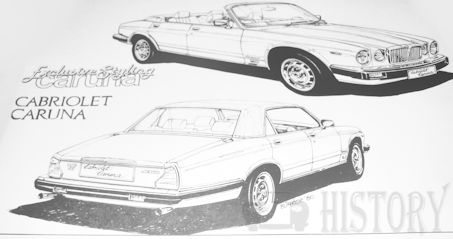 The Carrosserie Caruna AG was a Swiss coachbuilder . Erwin Schill founded the company in Spreitenbach in the canton of Aargau on March 8, 1965 .  It was dedicated to body modifications, but also provided a small number of own vehicles forth.  On November 21, 1991 Schill moved the seat of Dietikon in the canton of Zurich . In 2007, the liquidation was requested and implemented in 2010.

Caruna built two open vehicles in the 1970s. The first was presented in 1974 that Spider on the underbody of the VW-Porsche 914 , a rather bizarre roadster with optical bonds at the then popular beach buggies .1974-1976, the Caruna Staccato was built with self-supporting car body and Porsche 911 mechanics. Special features of this car were retractable rear window, curve lamps and folding headlights. He was a little more restrained with a wedge-shaped profile . This was at the 1977 Geneva Motor Show on display. This was also the first presentation of the brand to an international audience.

In the late 1970s, Caruna offered convertibles  for:

The intervention involved extensive reinforcements. Such conversion cost from CHF 100,000 - almost that time of the original price of a Rolls-Royce . In 1984, Queen Juliana of the Netherlands commissioned such a conversion of a Mercedes-Benz 380 SEL (W126) with an electro-hydraulically operated soft top. The vehicle was the tenth of twelve, the Caruna rebuilt and is still part of the royal fleet. It has been recently restored. Allegedly, the top closes within 25 seconds. 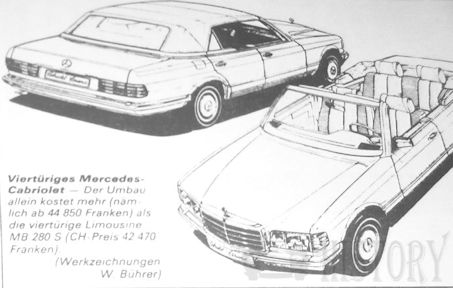 For the Targa coupe Caruna Open Air , the company went out of standard Mercedes-Benz Coupé of the then current E- and S-Class. They received reinforcements in the roof and floor assembly to compensate for interference with the self-supporting structure. Caruna also built water channels around the new roof openings and supplied the vehicle TÜV-tested and with model reports. An Open Air Targa conversion cost from CHF 12,600 without vehicle.  Available for:

The reverse principle, namely to put a fixed roof on a convertible instead of cutting a coupe, Caruna applied in 1976 at a Targa coupe based on a Peugeot 504 V6 Cabriolet . Again, the rear window is removable; in addition, the customer wanted modifications to the radiator grille (which visually approximate a Lancia vehicle ) and double round Ferrari tail lights. This unique piece still exists. From 1994, Caruna developed automatic sliding door drives and electric cassette treadboards for minibuses. These products have been successfully sold throughout Switzerland.