Automotive manufacturer of Esparreguera ;Spain from 1954 to 1956. 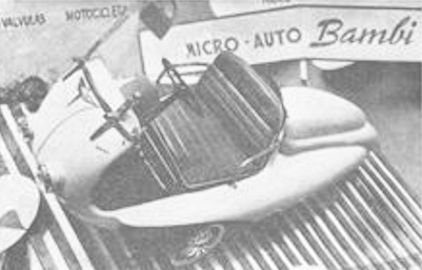 Manufacturas Mecánicas Aleu SA was a Spanish manufacturer of motorcycles and small automobiles in the 1950s .

The Esparreguera company has been producing motorcycles since 1953, when it also began producing automobiles in 1954. 1956 ended the production.

The model Bambi also known as Autobambi , presented in 1954 at the Feria de Muestras in Barcelona . This was a 3 wheel car with the single wheel at the back. The open, doorless vehicle could accommodate two people and weighed only 145 kilograms . For the drive provided a single-cylinder two-stroke engine with 200 cc capacity in the rear. The design maximum speed was specified at 75 km / h.