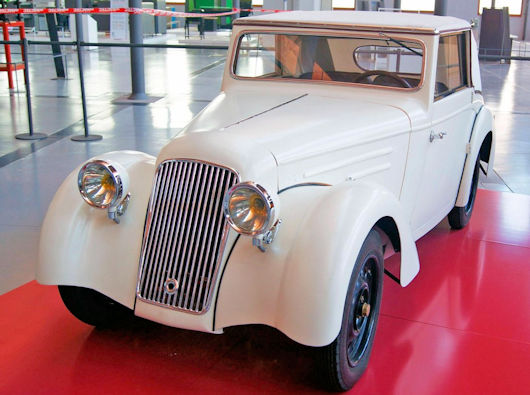 The AFA Automóviles Fernández y Aymerich was a Spanish manufacturer of automobiles . Manufactured between 1942 and 1944.

The company began production of automobiles in 1942 under the leadership of Juan Aymerich Casanovas and Luíz Fernández Roca. Jaime Morera Carreró was the designer. In 1944, the company exhibited at the Exposición Automovilista Nacional.

The company exhibited at the Exposición Automovilista Nacional in Madrid on July 10, 1944. In 1935 Juan had created the failed "National Ruby" car, due to the outbreak of the Spanish Civil War he was not able to go to production. But his experience served as the basis for the AFA. The AFA prototype was registered in Barcelona in April 1943, with the registration number B-72.107 and its patent number was 159,882. Juan Aymerich Casanovas hope to make 100 cars annually, but only produce one or two cars. Franco died on in 1946 and Joan Aymerich then abandoned the car project in 1947. The actual production number is lower. A few prototypes, and the other from a small production until 1947.

The model was based on the Nacional Rubi and was a small car with an open convertible body . For the drive was provided by a four-cylinder engine , which was mounted at the front in the vehicle. 52 mm bore and 62 mm strokegave 527 cc capacity . The power was 13 hp . The design maximum speed was specified at 85 km / h.

5cv 4-cylinder cabriolets were built by Juan Aymerich Casanovas in Barcelona. AFA had a four-stroke 527 cc engine, that could produce 13 hp at 3500 rpm.

The AFA microcar had a manual transmission with four gears with a top speed of 85 km/h.