The first generation 9-3, a substantially improved "new-generation" Saab 900 was launched in 1998 for the 1999 model year. Saab claimed that 1,100 changes were made, including a revised suspension in an attempt to tighten up the handling characteristics of its predecessor, the Saab 900 (1994–1998 model).It featured slightly sleeker styling with some models sporting a black rear spoiler and removed Saab's trademark centrally mounted "snow flap".

It was available as a three door hatchback.

It was the last small Saab to use the company's H engine. Notable improvements over the Saab 900 were improved ride and handling and substantially improved crash-worthiness with standard side impact airbags with head protection and active headrests. The Saab 9-3 along with the Saab 9-5 and the Volvo S70 were the first cars in the world to earn the maximum score in a side impact augmented by a pole testbased on Euro NCAP testing. The 9-3 continued the Saab safety tradition of performing a Moose Test.

A Saab innovation is the 'Night Panel', carried over from the Saab 900, which permits dousing of the instrument panel lighting, except for essential information, for less distraction when night driving. 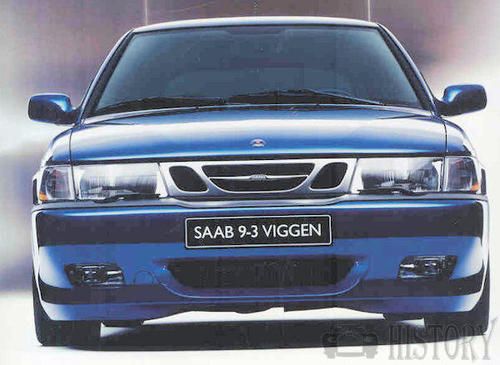 A high-powered version of the Saab 9-3 was the "Viggen" (English: Thunderbolt). It was named after the Saab 37 Viggen aircraft. Production ended in 2002.

To enable the front wheels to cope with the amount of torque available, the maximum torque was electronically limited.

Forty-six hundred Viggens were manufactured, of which only 500 units were produced for the UK market.

These numbers represent the total number of each body style Viggen imported into the USA:

In 1999, the Viggen was the first 9-3 to use Saab's Trionic 7 engine management system, which processes 2 million calculations every second analysing combustion temperature, boost control, variable torque curves and many other critical engine processes. In addition, the 2001 model year introduced a Traction Control System (TCS) to the Viggen.

The Viggen was only available with a five-speed manual transmission, CD player, power moonroof, and (what were initially) Viggen-specific motorised and heated leather seats with the Viggen delta logo embossed in the backrest; these were later also available in the Aero model (U.S. market 'SE' model) without the embossed Viggen logo. Some colors featured carbon-fibre interior trim from its introduction to the middle of the 2001 model year, when Saab substituted a less expensive printed gray pattern for the dash and standard trim for everything else.

New Viggen buyers in the USA were treated to two days of advanced driving instruction at Road Atlanta and dined with Saab USA executives from nearby Norcross, Georgia. This programme, operated by Saab and Panoz, was called Viggen Flight Academy and later transformed into the current SAAB Aero Academy.

Some motoring journalists were critical of untamed torque steer in low gears. Although the torque steer can be nearly eliminated through the use of a steering rack brace,also called a "Viggen Rescue Kit" available through a few aftermarket vendors. 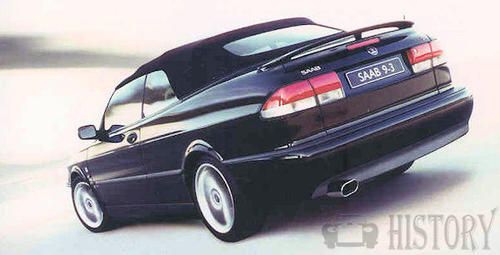